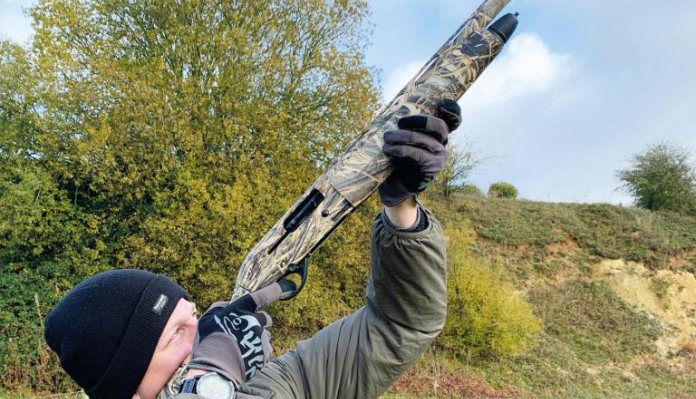 As we all know, Beretta have been producing well made guns for a very long time; as a company, they cater for those with all depths of pocket, even people as mean as me. Understandably, the cost of production has gone up over the years and therefore so have the retail prices. And perhaps with this in mind and wanting to get a more affordable semi-auto into the market, they brought out the Outlander.

The Outlander is the latest (although it has been available for a few years now) in the 300 series. The gas piston operating system has been updated and, according to those more learned than me, leans towards that found in their 400 series guns. This improved mechanism is self-cleaning and reliably cycles cartridges of lighter loads that earlier 300s would not have done. Another improvement is that the upgrade has resulted in a slimmer overall design.

The test gun is a 28” multi choke in Max5 cammo, a wildfowling favourite; in the UK, it is available in 26” and 30” barrelled options, along with the 28” supplied. The barrel is a metal called Steelium and proofed for steel loads, the Outlander comes supplied with a single ½ choke, although others are available on request, this no doubt helps keep the initial purchase cost down. Any multi choke shotgun I own only has ½ choke in it, even the over and unders where I have purchased an additional one to have ½ in both barrels. It always seems to be the best restriction for most needs and loads, so I cannot fault their thinking on that line.

The barrel has a 6mm rib that is fi nished with a high vis bead, it is chambered for 3” (76mm) cartridges, so along with the Max5 cammo another very desirable trait for the wildfowling community. This Outlander was a 3-shot (2+ 1 in the chamber) so a Section 2. However, also available is a 3+1 version for those wanting a Section 1 gun, which given the single extra shell, doesn’t seem worth it. Also, I have to point out that the way the barrel is attached negates the fi tting of an extension tube, as some other Beretta semis can do.

Overall length was 47 ¾”, with a length of pull (LOP) of 14 ¼”, spacers can easily be fi tted to increase the LOP. In this instance, the gun fi tted me very well, after I had added an extra 1 ¼” to the stock. Should I have needed to adjust the comb and drop of the butt, there a several inserts supplied, which fi t between the action and the pistol grip that allow you to make these fi ne adjustments to get that perfect gun fi t.

Chequering on the forend and pistol grip is of the common diamond cut, it is not sharp to the touch, although my preference would be for it to provide a more positive surface, I can see how cold and wet hands may not achieve quite the level of purchase the user could require. The forend is well proportioned, no doubt due to the slimming down of the gas system and fi ts very well in hands of all sizes. The whole gun feels well balanced and points naturally at what you are looking at when handling, almost like a natural extension of the shooter’s arms.

Trigger pull was crisp with no extra play in it and, when shooting, felt like it broke consistently and certainly did not feel as though extra effort was required to pull. The cross bolt safety catch is of a sensible size to be easily located and operated, even if bulky gloves were worn, it is located above and to the front of the trigger guard. One clever thing about the safety is that it can be easily reversed to allow more natural operation by left handers. The Outlander comes with sling attachment points, which is always a welcome feature on any semi. Max5 is a great cammo pattern and a favourite to be found on many different brands of auto nowadays, the application has been well done, although if one was being very picky, there is a slight colour difference between that applied to the metal of the gun, as opposed to the butt and forend.

Stripping for maintenance is easy, as is cleaning too, there really are very few places for dirt to hide. After fi ring around 50-shots, there was no build up of soot or other muck around the gas parts, a testament to how well the self-cleaning system works. One of the claims of the improved gas system, is that a greater range of cartridge types can be used that will reliably cycle the action. For testing, I used a variety of brands and loads, ranging from 21 to 36 grams. As you would expect, all of the 28s and heavier loads worked well, with no cycling problems at all, irrespective of whether plastic or fi bre wadded cartridges were used. The 24s all cycled the action properly as well, except with two shots but I had not mounted the gun fi rmly in my shoulder, which may have been the cause of this.

However, the 21 gram shells did not cycle the action at all, which was not unexpected, as to date I have only ever seen one semi that could run on these very light loads. Shooting the heavier ones was not at all uncomfortable, yes you know you had fi red them, but I did not have any thoughts about not using them through the Outlander. I did not fi re at a pattern plate, but enough grey squirrels and crows paid the price, some at quite considerable distances, for me to say that when combined with 30 or 32 grams of #5 shot the Outlander held a dense pattern and shot to my point of aim.

The Max5 gun retails for £1145 but for the range prices start from £1045, they are available in silver, black or wooden versions too. Really what is there not to like? It’s a Beretta for a smidgen over a grand and handles and shoots well. One fi nal point though, a friend of mine bought an Outlander with the wooden stock nearly two years ago, he is known for being hard on his work guns and to date even he has not had any problems or managed to break it!