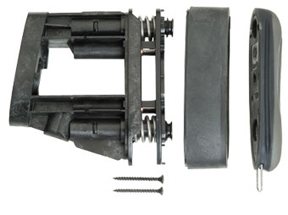 It is no great secret to readers of this magazine that I am something of a Beretta fan. I have used hundreds of the long established firm's guns over the last 20 or 30 years and, at this point in time, am the proud owner of at least half a dozen - three 28 bore over and unders and three 12 bore semi-autos. I use the 28 bores - the latest a EELL - for most of my game shooting, and the semis - all old 303s now - are used for competition, pigeon, wildfowling and gameshooting abroad.

As is self evident, I have great faith in the marque. It usually offers great design, durability and value for money too (at least as far as the mass production models are concerned). When the sporting going gets tough, I usually pick up a Beretta, and, more often than not, it is my trusted 32" barrelled 303 which must have more than 100,000 shells through and has shot clays and game on four continents (it has, literally, saved my life on one occasion). That old 303 appears to be virtually indestructible and has also won its own value a hundred times over in cash and other prizes. I have done everything I can to break it, but I have not succeeded yet!
Don't misunderstand me though, I am also very fond of the modern Beretta semi-autos too. Until quite recently, I had a black synthetic stocked 391. It was an incredibly good piece of kit, great to shoot (the new plastic stocked guns seem to produce less felt recoil than any other type). Overall, an unbelievably good gunfor the money (we tested it in these pages some months back). In fact the 391, in any form, is one of the best Beretta semis yet. All of which brings me, in typically rambling fashion, to this month's test gun - the Beretta Xtrema II.

The test gun is unusual in several respects. It is a 28" barrelled gun with Optima Plus chokes (the thin, long type that Beretta now favour in many of their models, but flush fitting). It has a synthetic, Realtree Advantage Max4® HD camouflaged stock, with two recoil reducers; a weight and spring type within the stock and a Kick Off Isis-like reducer behind a Gel Tek pad at the butt end. There are rubber inserts on forend and grip. These are practical for a gun that is likely to be used in wet conditions, and the aesthetic effect is better than one might expect. The Xtrema has a high visibility front sight (something I am not always fond of but ideally suited to a wildfowling gun that may be used in poor light).

There are two things, however, that really set this Beretta semi-auto apart from others (save for other Xtremas) - it has 3 1/2" chambers and it has a rotating bolt head (seen on all Xtrema models) combined with a modified Beretta gas system (this may relate to Beretta's relatively recently aquisition of Franchi - there are distinct similarities between the Xtremas and the Franchi 912).

Externally the gun does not look much different to other Beretta semi-automatics save for the camo, but get inside and it is a very different story. At this stage I have to make a confession, I do not have the Xtrema II test gun in front of me as I usually would. It went back to GMK - the importers - some while back. So, I am working from a failing memory (and my field notes) in a farmhouse in Gloucestershire after a very fine new year celebration and some pretty good pheasant and pigeon shooting (and, let's admit it, managing a corking new year hang-over). But, we're the Pony Express at Gun Mart, so the story always gets through!

Back to the plot and another glass of water. The striking thing about the action of the Xtrema apart from the rotating bolt head (a feature developed in shotguns by both Winchester and, most interestingly, by Armalite in the 1960s) are twin action bars (as seen on the Franchi and, of course, the Remington 1100) and a synthetic sleeve around the magazine tube (as seen on the Browning Gold semi, another excellent, modern, design). Beretta semis have tended to have metal sleeves and single action bars in the past - but, this is a 3 1/2" gun and clearly the designers have had new issues to contend with because of the long magnum shell.

The Xtrema appears well made and the ergonomics are good. The grip looks very modern, but provides good purchase, the forend design is practical too. The butt does not look especially pretty with the recoil reducer to its rear, but it is comfortable to mount and the Gel Tek pad (for which a 12.5mm spacer is also available) and recoil reducer have been neatly engineered. But beauty is as beauty does.

The gun has an alloy action as developed by Beretta in the 300 series. The trigger guard and combined plate is made of synthetic material (as Beretta have been using for this part for some time) and is nicely streamlined. The bar type safety is in the forward section of the trigger guard and works positively. The trigger itself is a good shape, and the trigger pull is a little better than previous Xtremas. The trigger unit, I am told, has been redesigned.

The 3 1/2" chambered barrel of this Xtrema is well presented and has a narrow, ventilated rib (my preference on a working gun would be a solid design) but the materials and workmanship are well up to the high Beretta standard. Much the same may be said of the action machining. My only critical comment would concern the welding on the piece that holds the two action bars together at their front. I am sure it is strong and well done on the engineering front - but it looks a little untidy when compared to other Beretta semis.

I did not shoot the gun with 3 1/2" shells, nor even 3" ones. This is entirely down to my prejudice against Roman Candle cartridges - I never use them. They knock your head off and achieve little extra in practical performance terms (yes, I know I am an old fart and you could probably argue otherwise in the case of non-toxic shot, but I have always found 2 3/4" bangers sufficient for my needs). Using Lyalvale 28 gram loads and a few 32 gram shells, the Xtrema II shot very well. Although I am a fan of 32" barrels for clays and often use them for game shooting too, I have to note that 28" length is a better choice for most field applications. My own 391 synthetic – which I mentioned earlier - had a 28" tube and was an excellent and forgiving gun to shoot, as good or better than my old 303.

Overall, I was impressed with the design of the Xtrema II. But, the truth is that I would not buy one myself because I do not use 3 1/2" shells. This gun is designed around thatspecialist cartridge (although it will digest shorter ones quite happily). The gun is an interesting development, nevertheless, and will appeal to some wildfowlers. For less money, however, one may buy a synthetic stocked 3" chambered Beretta Ulrika. That basic model is simply unbeatable in my opinion - a classic that in due course will be recognised as such.

My thanks to the Braintree Shooting Ground, GMK, and to Lyalvale (Express) who supplied the cartridges used in this test.

Special features of the Xtrema II:
* Stock, action and barrel are fully camo covered, except for rubber inserts on the forend and grip
* The gas operation system is self-contained with no loose inertia springs or o-rings to lose while field-stripping. ?
* Elastomer bolt damper to lessen the impact of the bolt and minimize the recoil signature.
* Optima-Bore overbored barrel to minimize recoil and optimize pattern efficiency. ?
* Spring/mass recoil reducer ?
* Gel-Tek recoil pad  ?
* Optional ‘Kick-Off’ Recoil Reduction System that utilizes the proven automotive technology of hydraulic dampening