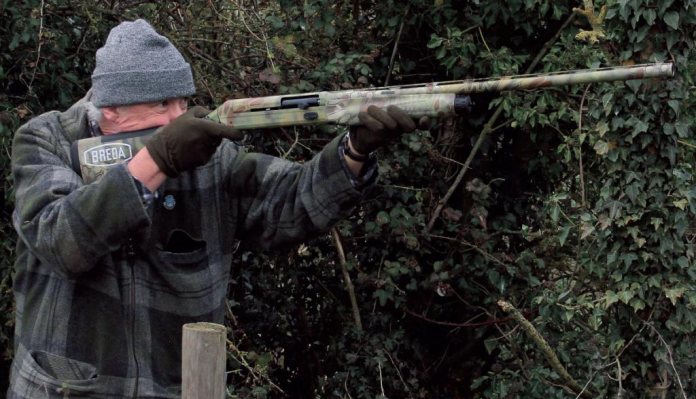 I really had a good time testing the last Breda model, the 930i competition gun so was expecting good things from this long-standing Italian semi-automatic shotgun maker. I was not disappointed.

This model, the Kryptek Mandrake is aimed squarely at the wildfowling community and is a tough, uniquely camo clad super magnum semi-automatic shotgun capable of shooting 3.5-inch super magnum shells. It’s a light weight really at 7.1lbs weight but is really nice to handle for a semi-automatic and also possessing a purposeful look is built as an inertia system so fewer moving parts which means it is reliable to boot. Just because it’s a 3.5-inch magnum it does not mean it has to be used as such and indeed a non camo black version is just as good for rough or pigeon shooting with the correct ammunition.

Retailing at £1425 from Viking Arms, the Mandrake is built to work and work properly without all the frills of some semis.

Tri-polymer recoil reducing stock is what the sales blurb states – all I can say is that the stock has a very good feel to it. It’s not plasticky like some synthetic stocks, it’s not hollow sounding either. The Kryptek stock has a `natural feel` to it as it just seems to effortlessly shoulder and get your eye looking down the rib. There are stock adjustment shims to alter the length, cast etc. but to me it was just fine.

The stock is light but the whole gun does not feel barrelheavy and the quite up-right pistol grip keeps the barrels more level when I held it. The length of pull is 14.25-inches, typical semi-automatic length, and the recoil pad is a soft black rubber with chevron imprinted to it that act as additional grip.

There is moulded-in checkering to both the forend and pistol grip, which is okay, but the forend’s profiled form gives a better hold as does that upright pistol grip as mentioned earlier.

The overall finish is quite smooth, it has to be said, but not slippery and I liked it as with the addition of the soft-touch cheekpiece insert. No doubt this was added to soften the blow of the heavy 3.5-inch magnum loads, but the combination of that tri polymer absorbing stock, soft recoil pad, rubber cheekpiece and being a semi-automatic, recoil is quite manageable.

Overall finish on this model wears a striking Mandrake camouflage scheme, which I really like. It’s a bit like a cross between a leopards spots and digital and conventional camo patterns, with the overall snakeskin-type look and it really works well. It covers all the stock and barrel and action too for a complete protective and concealment covering.

The inertia or recoil type action is a simple system offering easy maintenance and reliability. You do have to shoulder the gun correctly i.e. have it tucked into the shoulder so the reciprocating inertia action or bolt has a force to act against, shooting off the shoulder can cause non cycling with all inertia systems. Like its 930i brother, the Breda Kryptek uses a split profiled action where the bolt housing or top of the receiver, 8-inches long, is actually all one part of the barrel, so is lifted off the bottom half of the action as all in one when the barrel is removed. I am beginning to really like this system, as it allows easy access to the trigger unit and magazine follower for very easy cleaning from gum and unburnt powder. Also, if you fit a scope for slugs or red dot sight then twin dovetail action top is always in alignment with the barrel’s bores. It also houses the sprung inserted ejector spur that can be replaced by sliding out its spring steel wedge. On test all was positively ejected.

The ejection port is a good size too, at 3.25-inches, no doubt to facilitate the larger 3.5-inch shells, and the bolt has the two-piece split construction with a separate two lug rotating head to it for a positive lock up. This bolt head is chromed for longevity.

The lower action chassis houses all the trigger, recoil system and magazine follower, which is a highly polished steel. The extended bolt handle is longer than normal at an inch with scalloped profile for a good grip, as too is the bolt release mechanism on the right-hand side of the receiver that is highly serrated and elongated again to allow a fast operation. A small drop lever in front of the trigger guard when pushed up pops a round directly onto the mag follower.

The trigger is quite thin and smooth and had a pull weight of 3.55lbs, very good for a semi, whilst the safety is the classic cross bolt safety behind the trigger blade and stops its movement when set. Simple but effective.

There are quite a lot of options for barrel lengths with this model, not all legal in Britain on section two certificate, so the 26-, 28- or 30-inch lengths are the more common ones. Interestingly I had the 28- inch model, but it definitely measured 27-inches, muzzle to chamber end. You have five flush fit chokes of 2.75- inch length, supplied as standard, thus spanning all the chokes you could need, nicely made and finished too.

This being a 3.5-inch magnum gun it is unsurprisingly magnum proofed for steel shot but will shoot any conventional 12-gauge ammunition with a decent shot weight. The bores are very well made and have a chromed lined interior for longevity and ease of cleaning.

The rib is 7mm width along its length with a serrated top and eight large vents beneath it and a single red dayglo bead at the muzzle.

You know when a gun is right when you don`t notice it, if that makes sense. All the controls, handling and operations are natural, like riding a bike, so don`t worry about it, just get on and shoot the thing. I unsurprisingly did not have many 3.5-inch shells (I use a 10-gauge for geese) but I did want to see how low a shot weight charge this Breda would reliably work at. We had 3.5- inch Remington Turkey loads – no problems! 3-inch steel loads and 3-inch magnums from 36 -42-grams shot weight – no problems and actually very easy on the shoulder.

With the common 28 - 32- gram 12g loads with Special Pigeon, Black Gold, Clear Pigeon, Steel Game Extra, velocity, Pigeon Select and Solway steel all functioned and cycled without a flaw. Only when the lighter 24- or 21-gram loads did I have issues with reliable cycling; it’s a 3.5-inch magnum, so what do you expect.

I also tried some Eley Alphamax loads with BB shot, which are handy for foxes on a drive, and with the ½ choke fitted we had a very even spread and good density of shot against the fox target.

What`s not to like in my view? Breda are right up-todate with their shotguns, the 930i was sublime to shoot and this Kryptek Mandrake is a very capable field gun. It’s rugged, reliable, capable of pigeon to goose shooting, has a really interesting and effective camouflage pattern, and is also good value for money at £1425.