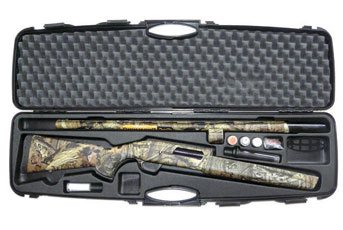 It just had to happen, as the various shades and patterns of camouflage become even more purpose specific, so it would seem are the shotguns that are covered in them. Called the Camo Infinity, the Browning Maxus seen here has been clad in a cloak of green and brown hues intended for the sole objective of woodland hunting. So with this theory in mind, Browning also produce the Camo Duck Blind for those intent on wildfowling. Will this result in hunters buying multiples of the same 12 bore in different camo patterns?...  Quite possibly!

Humour aside, the Maxus Camo Infinity and its close cousin the Duck Blind offer the shooter all the technological Maxus benefits wrapped up in a gas-powered semi-auto but this time, unlike the more conventional models, comes with a longer 3½” chamber.

Presented complete with a black plastic case, a full set of flush-fit Invector chokes plus an extended ½ that adds an extra 2” to the barrel, the gun also arrives with a set of stock adjuster shims, an additional stock spacer, sling swivels and a trigger-guard lock. In other words everything you might need and some items you might never need – but nice to have anyway.

As might be expected with any semi-auto that comes with synthetic furniture, the sporter stock is slightly smaller than its wooden counterpart. That said it’s not a bad shape, the soft rubber Inflex recoil pad taking the sting out of the most severe loads whilst the textured almost pebbledash texturing on the grip and squared off forend offer plenty of hold with gloved or wet hands. If I had to comment it’s that the open radius of the grip could well force those with smaller hands to have to hold the gun with a slightly cocked hand. Not a major physicality but one you might want to look out for.

If there’s one aspect of the Maxus that didn’t escape Browning’s marketing department it’s the overwhelming use of the terms ‘speed’ and ‘power’. Assembling in the usual fashion of inserting the barrel extension into the receiver until it’s fully seated and sliding the fore-end down over the mag tube and ‘Power Drive’ combined gas valve and guide, its the ‘Speed Lock’ latch that holds the forend in position. More akin to that usually found on an over-under shotgun in so much as the profile is more angular, the familiar mag cap has been replaced with a lever operated locking mechanism.

By pushing the unit firmly into place, the metal lever situated at the end of the forend is then pushed down into place, locking the barrel to the rest of the gun. To reverse the process, by depress the square button in front of the latch the lever will then lift and allow the forend to detach, the whole design of the assembly a far neater and tidier system than the conventional screw cap method.

Externally, the dovetailed alloy receiver is covered in the same Break-Up Infinity camo as the rest of the gun which means apart from the words Browning and Maxus that are picked out in black, there’s theoretically no decoration. Moving to the inside the now time proven two-piece, single claw bolt takes care of the detonation process, the operation of which can be carried out in the usual fashion by introducing the first round via the ejection port and depressing the bolt release located just below the opening or by using the ‘Speed Load’ system. By pushing the first round into the magazine, the mechanism automatically chambers the first round whilst cartridges two and three then enter the magazine tube in the usual fashion.

On the left side of the action there’s also a magazine cut-off lever, flicking it rearwards allows the shooter to discharge the round chambered or remove it by operating the bolt by hand, the next round remaining firmly in the magazine tube. And should you need to unload, by turning the Maxus upside down and pushing down on the shell lifter with the left thumb, a gentle push on the cartridge head of the shells still in the magazine tube allows rounds two and three to feed smoothly back into the shooter’s other hand.

The only other control is the safety, the usual cross-bolt style situated to the rear of the enlarged trigger guard, just behind the non-adjustable trigger, the gold and black of the assembly the only break in the gun’s camo exterior.

Moving forward and with the forend removed the ‘Power-Drive’ gas system is unusual in that the new larger gas valve is integral with the action slide which in turn increases the cyclic travel by 20%. Whilst smoothing out the overall feel of the Maxus when the system is in motion, it cuts down on residue build up; even after two hundred rounds the mechanism remained remarkably clean.

Lastly the 28” Vector-Pro forcing coned, back-bored, chrome lined, steel proofed barrel that in Camo form uses a 3½” chamber. Basically a term for over bored more space in the internal bore meaning less shot deformation and a reduction in recoil. Covered like the rest of the gun in Break-Up Infinity camo, tube is topped off with a 7mm vented rib that culminates in an oft criticised triangular HiViz bead. One of the seemingly most controversial beads ever to be fitted to a shotgun, for those who don’t like the extended bright green or orange inserts, round ones are provided as are plain white ones.

As to why the moaning I’ve never known but it would all seem to emanate from one negative comment… Personally, I rather like the green triangle, the colour and shape extremely effective when shooting in low light, roosting time conditions.

Now I’ll grant you that all the advancements actually do work irrespective of the somewhat irritating names they’ve all been given. But whilst they all make for marvellous annual catalogue reading, it’s what the gun is like to shoot that counts. It was whilst evaluating the Maxus with the Arrow Laser Shot that the first physical aspect of the gun was highlighted. Apart from the fact the Maxus for me is flat shooting for a semi-auto, that weight 7lbs 4oz with an overall length of 48¾” make it feels a far larger gun. Whether this is the optical effect of the Break-Up Infinity camo I couldn’t really say, but for a semi-auto that bodily is no larger than similar shotguns, the size does at times seem noticeable.

Drops at comb are 1¾” and 1 7/8” combined with a 14 1/8” length of pull and an average trigger break of 6lbs 4oz. One point of note is that whilst the guard is oversized, a distinct advantage for a shotgun designed for use in more inhospitable locations, a slightly larger blade would be appreciated as would some form of adjustment, the unit set more or less as far back in the guard as it’s possible to get. On the plus side the positioning means that even a thick, winter gloved finger will always find the blade some extra length would for me be much appreciated.

One point of note before we go any farther and it’s the running in period. All Browning and Winchester semi-automatics need around forty or so heavy loads running through them to bed in the cyclic system, if not you’ll encounter the occasional stove-pipe, the empty shell and the next round colliding in the ejection port and whilst it isn’t dangerous it can be annoying when showing off your latest acquisition. My and Browning’s advice therefore is to get a couple of boxes of cheap 50g shells, lubricate the gun and pump the rounds through three at a time. It might seem a tad harsh for a new shotgun but take it from me it’ll pay dividends in the long term.

As always during the summer months it was fifty of Bond & Bywater’s sporting clays that beckoned, a blue skied evening, a hundred or so rounds of 28g Eley VIP fibrewad and ¼ choke all that was required. Balancing directly beneath the mouth of the chamber, the Maxus Camo is more or less neutral in attitude meaning it rotates easily around its central axis. Apart from the fact that for me it’s slightly light in the stock, a little extra weight at the shoulder more to my liking as per the walnut stocked versions.

That aside the Maxus Camo performed exactly as expected, it moves easily, mounts quickly, patterns well whilst the cyclic system is smooth and efficient, the speed of operation meaning the next round is ready to go well before you are. And yes, the large triangular HiViz bead adds to the gun’s pointability, allowing the shooter’s peripheral vision to keep a constant measure of exactly where the muzzle is situated in relation to the target and make any minor adjustments.

But whilst breaking clays is all well and good and inkeeping with the Maxus Camo’s all-round abilities, this won’t be the purpose for which it will be purchased. Keeping with the ¼ choke mainly because the effect of switching to non-toxic tightens the restriction up to ½, whilst changing over to 3” Winchester Blind Side ammo might seem like overkill for taking down crows, these cubed shot cartridges will more than highlight any defects in a shotgun’s ability to dial out recoil.

Appropriately decked out in Browning’s latest ‘Dirty Bird’ camouflage suit and with Huntroyde Estate’s crows coming into roost, with the Maxus fully loaded with three rounds, the gun’s dimensions, angles and the Inflex recoil pad all combined to ensure that these 13/8 oz loads of American built 3’s felt little different to the 28g competition loads used the day before. Designed for duck shooting, the Blind Side’s effect on crows, a couple of magpies and a jay were - in combination with the Maxus - devastating. Similarly, as the light faded the HiViz bead once again came into its own, the light gathering effect ensuring the shooter knows exactly where they’ve placed their muzzle.

The Camo Infinity was and is an easy 12-bore to shoot irrespective of the target. It handles and swings with ease, the gas system stays remarkably clean whilst the gun’s resilience to its surroundings means no matter what you or the elements can throw at it, the gun will probably look better than you do after a couple of hours secreted away in a damp woodland!

As regards an all-rounder that encapsulates all the latest semi-auto enhancements the Maxus Camo Infinity will more than satisfy any shooter’s needs. At £1,185 it’s considerably cheaper than many other makers’ equivalents to a degree, for those looking for this type of 12 bore it’s an absolute bargain, the switch to a European based manufacturing site allowing Browning to keep their retail prices down to a sensible, affordable level.

The Maxus looks good with a camo finish and the covering increases the gun’s durability and resilience to mud, grime and the general elements. Throw into the mix the fact that it shoots well and there’s little if any reason to go elsewhere. Browning always make a decent shotgun that as the saying goes, ‘does what it says on the tin’. So providing you’re pointing the muzzles in the correct direction, the Maxus Camo Infinity will do the rest. GM