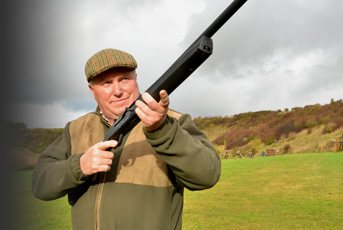 Go into any gunshop and the chances are that there will be a pile of semi-auto shotguns on the rack. 30-year old Remington 1100’s sit alongside Hatsan Escorts, Beretta’s old and new sandwich the new (ish) kid on the block, Benelli, and others from the likes of Fabarm, Guerini and Franchi add yet more choice into the mix.

For many years one semi-auto was viewed very much as another regardless of manufacturer. Most people that bought one used it for pigeons and/or wildfowling; consequently looks were not that much of an issue which considering how some older guns look might not be a bad thing.

Handling was also not always at the top of the agenda, if you wanted a really sweet shooting gun you bought an over and under or a side by side. Plus the fact that an auto didn’t handle so well was compensated for by that extra shot, or in the days prior to Hungerford the extra three.

However we do - as they say - live in more enlightened times, and the big manufacturers have realised that churning out the same old thing just isn’t cutting the mustard in the sales figures. With new entrants such as Hatsan producing cheap workaday guns that do the job well, albeit without any particular degree of finesse, the majors have had to bring their offerings up to the cutting edge of design and performance! Consequently in the last few years we have seen the launch of the Winchester SX3, Beretta A400 Xplor, the Benelli Vinci and our test gun the Browning Maxus.

All of the aforementioned guns are technological marvels. Benelli’s new incarnation of their inertia system is genius even though the aesthetics of the gun itself might not be to everyone’s taste, but what then does the Maxus bring to the party?

Browning has preferred to concentrate on honing the traditional gas-operated system rather than go down the inertia route favoured by the likes of Benelli and has built what it calls the Power Drive Gas System.

This features larger ports to allow the excess gases produced by the really high performance loads to be vented away quickly, thus making the whole cycling process much smoother. It manages to do this without coating the internals with muck and dirt thanks to the Browning engineers having paid attention to getting the seals to do their job properly. Take a look at the spring on an old style semi-auto after just a handful of shots and chances are it will be covered in powder residue and other detritus but not so with the Maxus. There is no mainspring in the conventional sense, or connecting rods either, instead a free floating tube/tappet comes back when fired striking the bolt carrier backwards and so cycling the action.

The Maxus also sports the Lightning Trigger which Browning claims gives a lock time of just .0052 of a second, though in all honesty if you can tell the difference between that .0052 and say .0070 you are a better man than I.

Trigger pulls from the removable trigger group were very good on the whole by semi-auto standards, being crisp, consistent and breaking around the 4 ½ lb mark. The safety is of the usual cross- bolt format though this control is quite chunky and, as with others that tested it, I found that it can be a little confusing if you are more used to a flush-fit design when in the fire position. On more than one occasion I had to double check that it was indeed off, though owners would soon become used to it no doubt.

The Maxus barrel on the test gun was 28” which equates to a 30” over and under when looking at total overall length. It is fitted with an attractive vented rib that offers a good sighting plane, at the end of which is a replaceable high visibility bead (spares are included). The tube follows Browning’s long established practice of back boring combined with 2 ½” long forcing cones. Something they were reluctant initially to adopt though the results are now plain to see. These two features working in harmony to reduce recoil and minimize pellet deformation meaning better patterns from the business end. The choke side of things is handled by their Invector-Plus system, three tubes being included as standard. The Maxus is also steel shot proofed as a matter of course.

A quick look at the Maxus and you would be forgiven for thinking something is missing, until that is you take a look at the forend release catch. Unlike the round magazine end caps of every other auto on the market this operates via a pull down lock up lever much like that on the bottom of an over and under forend. It makes for a much smoother looking design and although it feels fiddly and a little strange the first time you do it, after a couple of times it becomes second nature.  Browning calls it a Speed Lock and it’s easy to see why; it takes just a couple of seconds to remove it compared with trying to spin off the end cap which invariably ends up on the floor in the mud.

The Maxus also has a speed loading function, resurrected from the original, 1900 Auto 5 Browning. Simply push a cartridge into the magazine and let it go and the gun does the rest for you, loading and chambering the round. Similarly unloading it is trouble free, just press the latch inside the receiver and the shells come out one by one. Magazine cut off switches are another feature that identify the later generation semi-auto’s and this is no exception, flip the easy-to-use switch located on the left side of the action and you can quickly chamber a different round without having to unload the lot.

The test gun is the composite model (black synthetic) following the current vogue for semi-auto’s and it certainly felt comfortable enough between the hands. The close radius grip means the trigger is comfortably within reach and the moulded grips feel positive. Though the test was done in dry weather I could not imagine it proving difficult to keep hold of the Maxus in even the wettest of conditions. The composite material had a quality feel about it with none of the cheap hollow sounding characteristics of some other plastic stocks. Dimensions are pretty standard with a length of pull of 14 ¼” and a drop at comb of 1 ¾” and at heel of 2”. Shims and spacers are included with the gun so it should be easily adjusted to suit just about anyone. Call me a traditionalist but I personally prefer the wood stocked versions, however the fit and finish on this composite are as good as any I have seen.

Shooting impressions of the Maxus were very good, starting with a round of skeet on Wylye Valley Shooting Ground’s newly installed range. Being light (at a shade under 7lbs) the gun moves well and doubles from the centre peg 4 posed no problem, the gun being able to change direction quickly without becoming unduly unstable. Similarly the super fast birds from station 8 were easily dealt with though experience in the past has found that guns which perform well here sometimes struggle when dealing with long crossing targets out over 45 yards or more.

However trying some of the more challenging Sporting targets showed that the gun performs well here too. As with all auto’s you do need to drive the gun a little more as it doesn’t have the front end weight of an over and under to keep the swing going and keep it stable but on the whole the experience was very pleasant and I would have total confidence in it as a clay buster. Patterns seemed to hold up well, half choke and Gamebore Black Gold 8’s being plenty enough to dispatch anything Wylye had to offer.

Recoil was acceptable thanks to the back boring and to the Inflex recoil pad which is designed to divert the punch away from the shooter through a clever directional design of the baffles. Cartridge choice is something that Maxus users won’t have to fret over either, operation proving consistent whether fed a diet of 20-gram light loads or 42-gram heavy hitters.

Verdict:  A super-efficient interpretation of the gas driven semi auto, it manages to combine clever design features along with robust engineering principles. Whether its clays, pigeons or tackling wildfowl on the foreshore it is unlikely that you will find the sweet handling Maxus wanting.

We Reckon!
• A versatile gun that may be the last semi auto you ever need to buy
• Fast handling but steady when it needs to be
• High tech design without being overly radical