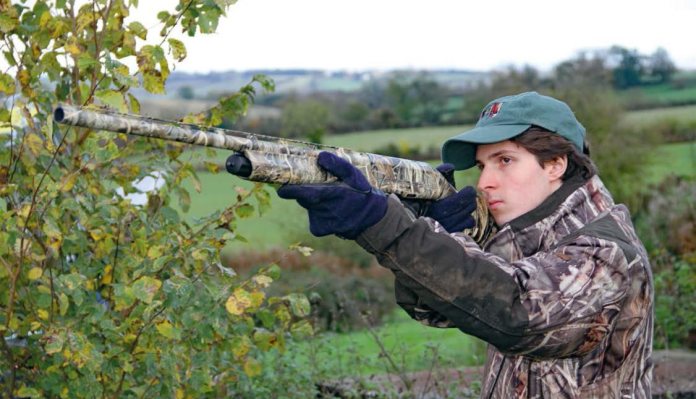 I tested the new Franchi Affinity about three years ago now and I remember then what a nice handling, Italian, semi-automatic shotgun it was for the money. This version features the MAX-5 camo pattern, is 3” chambered in 12-gauge only and includes a 28” barrel with a multi choke system. It’s a rugged little semi-auto, ideally suited for rough shoots, gamekeepers and wildfowlers alike, who need a good working gun.

The stock is where a good, useable shotgun wins or loses as handling is everything. It needs to fit perfectly to align the eye to the rib and thus sighting of game forward of the muzzle. Franchi uses a typical wedge system of plastic inserts between the stock and action to manipulate the cast, comb and drop of the stock to your preference. The length of pull is 14.25”, so not too short like some semis can be. This model sat firmly and accurately in the shoulder for us.

The actual stock is a tough, Techno Polymer. It has a hard outer shell that is quite thick. This is moulded in two halves and glued together, then filled with dense packing material, so it does not resonate on firing or when knocked. In other words, it feels very solid and non-flexible.

As the name suggests, this model wears the Realtree Max 5 camouflage pattern. It’s my favourite as it blends to almost any background, with its large life-like reeds and grass patterns, with plenty of open areas of the pattern to give a good, concealing 3D effect. There is a moulded in sling swivel attachment in the buttstock and a large inset black recoil pad, which is Franchi’s twin, 22mm, shock-absorbing system. When using some tough 3” loads, it certainly helped my cheekbones.

Up front, the same wrap-around Max 5 camo is applied to the forend, which measures 12.45” long and 1.75” wide. You have the usual, full-length upper finger groove for the supporting hands fingers to grip and further grip is added in the form of two moulded in, near full length, chequered panels (actually raised small squares) located on the underside of the forend.

A second sling stud is fitted to the larger locking nut that keeps the forend on, and facilitates break down of the gun with its removal.

Now the metalwork. I like the simplicity of the Franchi action, with its aluminium machined form and twin dovetail grooves cut into the top of the action for red dot or scope use. It has a simple, black anodised, push-button bolt release and loading gate just under the bolt. There’s no unnecessary magazine cut off system. There is a cocking indicator located just forward of the trigger. It drops down and shows a red dot to indicate the Affinity 3 is cocked, hammer back and ready to fire.

The bolt itself shows a smooth, matte black, blued steel finish and there’s a large, slim, cotton reel type cocking handle that’s just the right size to operate reliably but not to snag on clothing. The front section of the bolt is a separate rotating type, with a polished head and two large elliptical locking lugs that lock directly into the barrel’s chamber. There is a single, large, hardened extractor claw that worked well during testing, and an inset ejector rod is fitted into the left inside wall of the action.

A slim and smooth finished trigger links to the cross-bolt safety, which all sits within a black polymer trigger guard. This is a good way of preventing rust when you invariably rest the gun in a hide or on an estuary bank.

Loading is simple and intuitive, with no mag blockers. There’s just that release button on the action, which releases the loading gate so rounds can be slid into the magazine effortlessly.

With the forend removed, there is no gas system, just twin action bars that connect to the bolt carrier and direct the bolt rearward, without twisting. The large recoil spring then ensures the bolt returns to battery after firing. The magazine housings exterior surface has a gold anodised finish, which is very smooth and allows free operation of the bolt/operating carriage, and without a gas system remains free from powder residue in operation.

The only available barrel length is 28”, which is perfect for this type of gun and keeps the overall length to a sensible 49.25”. This Affinity is proofed for high-performance steel shot and includes a flush-fitting multi choke system. Three chokes are supplied (¼, ½ and full) and the bore is very well appointed, plus chrome-lined for ease of cleaning too. It shows an 18.3 to 18.5mm bore diameter and relatively short forcing cone, allowing the reliable use of fibre or plastic wadded ammunition.

I like the 8mm rib, particularly as it is slightly raised. With the stock configuration, it really does lead your eye straight down the rib onto the single red dayglo element and not on top of it. The rib is raised on eight vents to aid in heat dispersal and they gradually reduce in size towards the muzzle.

I have always liked inertia operated shotgun mechanisms, but they always perform best when firmly shouldered, so the recoil system has something to push against. If you are in a hide and take a shot at an odd angle, with the gun half shouldered, sometimes you may get a partial reload, which is common to all inertia systems. This Affinity 3 seemed almost devoid of this, with a cycling system that was very willing to operate.

I have used 24-gram loads before that worked, but this brandnew gun did have a few hiccups. Like any semi-auto, it needs a little bit of use to bed in the action fully. 28-gram pigeon loads and game loads up to 32-grams all functioned flawlessly. In use, I liked the way this Franchi effortlessly spat out spent cases and the overall recoil was noticeably reduced. I also shot some larger shot sized, 3” magnum steel loads through the Franchi and an overand- under 12-gauge I was testing at the same time. The recoil was easy on the Affinity but harsh on the O/U. That’s why I like a semiauto, as there is always that good second shot possibility, as you can still maintain a good sight picture of what you are aiming at!

A decent pigeon load was the fibre wadded Pigeon Extreme, with its 70mm case size and load of 34-grams of #5 shot at over 1400 FPS. We had 56 pellets in the 15” inner sectors that were quite nicely distributed, and 141 pellets striking the outer 30”, for a total of 197 pellet strikes. A good, dense, even pattern for pigeons and they make an identical plastic wadded load too.

Finally, some steel loadings for game and wildfowlers - Winchesters Blind Side and Gamebores SilverSteel. The former are unusual as they use Hexagonal shaped steel shot that are designed to pack into the cartridge more densely and cause more trauma on impact. The 3” magnum, 39-gram, #3 load moved at 1400 FPS and recoil was still fine in the Franchi. With the 1/2 choke fitted, it shot slightly left and was a bit blown in places. I had a total of 132 pellets hitting the board and there were 29 inner hits and 103 outer hits. A bit sparse, despite the mighty payload.

By comparison, the lighter SilverSteel loads (3”, 32-gram #4s) shot very smoothly and cleanly too. We had a total of 201 pellets on the board at 30 yards, which was excellent. The pattern was really dense with a slight upward left bias. The inner sectors all had 18, 18, 18 and then 39 pellets in them, with the remaining 108 spread around the circumference. This non-lead offering would make an excellent all-round game or duck load.

It’s nice to test a non-Turkish gun these days, and the Franchi represents very good value for money considering that it is made in Italy. That said, it’s a semi-auto designed to be a reliable companion out in the field, help with concealment and to be used, and used hard.