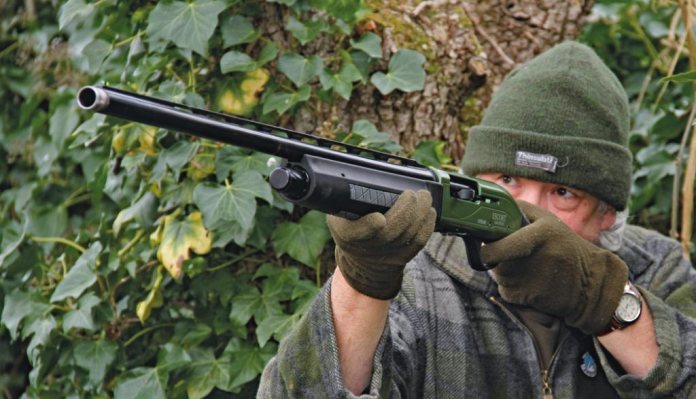 The Hatsan Escort range offers a plentiful supply of various semi-automatic 12 or 20-gauge shotguns at very competitive prices. As the name suggests, the Escort is meant to be a reliable and practical companion and is designed as a hunting tool but can also double as a clay gun if required.

The model on test is the Xtreme Magnum, which is a gas-operated semi-auto shotgun chambered for 3”/76mm cartridges. The Smart Valve Piston System installed means that the gun can cycle a wide range of cartridges, ranging from 24-grams up to the big 57-gram magnum loads. There is a choice of barrel lengths from 26 to 30” and the tester came with a 28” tube, which I like. The gun comes with a set of five chokes with extended length and a black synthetic stock. However, there are camouflage clad options available for wildfowlers or pigeon shooters. Hatsan also offers the gun in right or lefthanded configuration and for some reason, I got sent one in the latter! However, it did come with a new green anodised finish to the action, which is quite striking!

I wouldn’t call the Escort a lightweight semi but it has enough heft to allow a good blend of balance and sturdiness to the main load-bearing parts i.e. the action and barrels.

The action is made from aircraft-grade aluminium, which is quite substantial in places. It has a nice overall shape and a swept-back rear section to lead the eye down the rib. If you intend to use slugs, then Hatsan has included some 11mm dovetails on top of the receiver so that you can fit a red dot sight or scope. Make sure you fit the correct choke thought!

There are sculptural lines pressed into the action sides for decoration but it’s the overall finish that really catches the eye. Usually, an Escort comes with a chemically black anodised finish with the option for an Advantage Max4 HD camouflage wrap. In the case of the gun on test, it came with a very nice ‘Gas Monkey’green anodised finish to it. I like it as it contrasts well with the black stock and barrel, plus it certainly looks different. However, I’m not sure if it offers any sporting advantages.

Operating the Escort is straightforward. The bolt is of a one-piece design and features a tough black/blued finish and a single extractor claw. Ejection is performed by a steel pin that protrudes from the action wall, and as the bolt moves rearward it catches the rim of the spent cases. The bolt handle is not serrated but is reasonably long and curved which helps makes bolt manipulation easy.

If the bolt is pulled to the rear while the magazine is empty, it then locks into position, allowing you to pop the first cartridge into the chamber. Then, simply push the polished bolt release paddle, set into the magazine lifter ramp, and the bolt shuts. You can then load two additional rounds down into the magazine. (FAC versions are available for a higher mag capacity.)

To the right of the action and clearly labelled, is the magazine cut-off lever. When depressed, it locks back the bolt so a cartridge can be removed, while simultaneously blocking another case from the magazine entering the carrier.

Finally, the trigger guard gives easy access to the blade, which is blued, semi-striated and thin. Behind this is the typical cross-bolt safety system, which when pushed to the left puts the gun on SAFE and when pushed to the right shows the colour red denoting FIRE.

I like the stock both in the way it handles and feels. The soft-touch, semi-matte black finish is very good and does indeed lend an extra layer of grip to the polymer-based, synthetic sporter-type stock. The length of pull (LOP) is set at 14.35” from the factory and can be altered by using the three supplied spacers. There are also four shims that can be used to adjust the stocks drop and cast by inserting them between the stock and rear of the action. For me, as with other Escorts, I found the fit spot on and the comb and cast instantly have your eye looking right down the rib. In regards to the construction, the polymer base is quite sturdy and dense, even though the rear stock is moulded in two halves and is hollow. It feels rigid and is certainly weatherproof.

The forend is 11.5” long and features a dished upper profile for the fingers to rest/ grip. At the front, there are four vents on the underside and two on the side, designed to allow the exhaust gases from firing to vent out. To boost the grip further, the forend and pistol grip both include panels of tactile rubber inserts. Being slightly raised in profile, they grip the naked hand as well as a gloved one.

The recoil pad is grippy too, despite its shallow dimpled finish, so it mounts well without snagging on clothing. There are still no swivel studs for a sling fitment though, which I would like as I often sling my shotgun if walking about carrying kit.

Hatsan takes pride in their barrels, and on inspection, the one fitted was well finished off. They are made from nickel chrome-molybdenum steel and the internal surfaces show a good chromed finish, which makes them easier to clean and less likely to rust.

This magnum Escort can shoot the shorter 2 ¾” shells as well as the larger 3” (76mm) magnum cases, plus it has been proof tested for steel and magnum loads. The five semi-extended chokes that came with the gun were, full, improved modified, modified, improved cylinder and cylinder. Each one measures 2.75” long and once fitted, 0.75” sits proud of the muzzle. There is no choke key but the protruding portion is wellgrooved for grip, making them easy to replace in the field with no tools.

The 7mm chequered rib is ventilated, with eight diminishing sized vents towards the muzzle. Here, we find a green Hi-Viz front sight, which is highly visible and helps speed up aiming.

Beneath the barrel is Hatsan’s Smart Valve Piston System, which regulates the gas energy generated by different cartridges, ensuring that the gun cycles correctly.

Reliability is always the key with semi-auto’s and I have to say I did try to stop the Hatsan working, but it was hard work! Some of the 24-gram cartridges were 50/50 on ejection and the 21-gram loads fired but did not eject. Plastic wad loads were better when compared to fibre wads and all loads above 24-grams were fine, although some of the magnum loads did kick a bit. The Escort handled very well as the balance is literally halfway down the gun, making it feel lighter than it really is. Being a semi-auto, recoil was relatively light on the shoulder.

For testing, we fitted the ½ choke and rounds like the Gamebore Extreme Pigeon shot very well, both in terms of reliable function and on the pattern boards. With a payload of 34-grams of #5 shot and a fibre wad, we counted 187 pellet strikes. There were 67 hits to the 15” inner section and 120 pellets were spread around the outer sectors. The 24- gram Blue Diamonds struggled a little but the Hull Pro Fibre were much better. At the end of the day, if you stick to 28-gram loads then you will have no problems.

If wildfowling is your thing, then Hull’s Steel Game Extra performed well, with 71 pellets in the inner sector and 81 within the outer 30”.

The Hatsan Escort Xtreme is a semi-auto gun for all seasons or game. The synthetic stock is rugged and weatherproof, plus the green anodised finish gives a touch of uniqueness. If fed the right ammunition, it was reliable in testing and the combination of the barrel and semi extended chokes meant it shot some nice even patterns. At a street price of £400ish, it’s hard to knock this rugged multi-purpose semi.