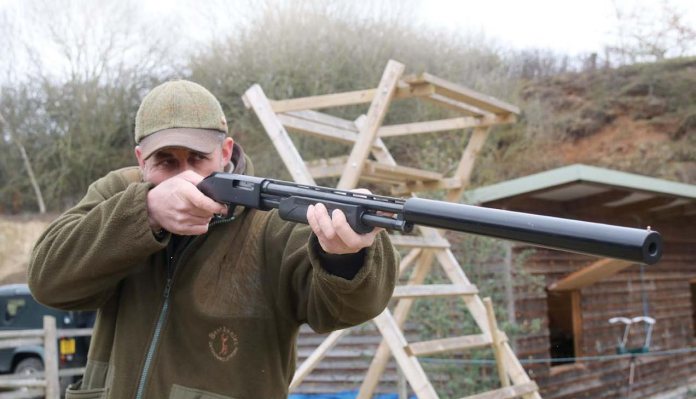 11-years ago, I looked at the Mossberg pump action 410 with a sound moderator fitted from Saddlery & Gunroom, I got on so well with it that I ended up buying one! This was the start of my journey, as when used from a quad bike, it was the best rabbit control tool ever! Finally, after years of faithful service and 20,000 cartridges later, my poor old rabbit basher has, understandably, started to become a little long in the tooth and unreliable.

Although in my part of East Anglia we do not have rabbits in the numbers that they once were, the loss of such an invaluable tool was not one I was prepared to risk! So, I have recently purchased the replacement, but as my previous review was so long ago and things change over time, I thought this would be a good opportunity to share any changes and my experiences with you.

Mossberg is a well-known manufacturer of pump-action shotguns and has been producing them for many years with great success. The gun in question is from their 500 range and in .410 calibre. The butt and forend (pump slide) are a black synthetic material, although wood is also an option. There is chequering on both the slide and grip, which provides a secure surface, even when fingers and hands are wet and cold. The barrel is 24-inches long and available in either full choke or open for slug.

The fully moderated (Hushpower) model offers a full choke as standard. Length of pull (LOP) measures at 14-inches but is also available at 13-inches in the youth stock. Overall length, without the moderator, is 43-inches and 51-inches with the suppressed barrel. My advice is if you think you may want to use it as a standard shotgun too, then get two barrels, as I have done; switching them takes seconds. Also, firing a .410 with a ported barrel (without the moddy) is no fun, not to mention the muck that flies out of the holes too.

The safety is tang-mounted and easy and instinctive to use with little disturbance to the firing grip. Although this control is plastic, as it was on my original gun, it is firm and certainly the old one has never caused me any problems. There is a bead half way along the rib, as well as the one at the muzzle, the moderator also has one attached, which should line up with the one, half way along the rib when the can is fitted.

Trigger pull is positive with no creep, and breaks consistently. There is some play in the slide giving it a rattle, which does not seem to have any detrimental effect on functionality. The same was true of my original and the only time I ever had any problems loading the next cartridge were when either one of the ejector claws/springs or slides in the carrier had broken. The 500 is available as a 2+1 (Section 2) shotgun or 4+1 (Section 1) firearm for those who want a bit more payload and firepower. Having used a 2+1 for several years and now having a 4+1, the larger capacity certainly helps in some situations when there are several rabbits in a small area and maximum impact must be made on their numbers during a visit!

Saddlery & Gunroom drill ports in the barrel and then attaches what is essentially a large, in-line nut about one third of the way down it, to which their Hushpower moderator is screwed onto. This tube partially sleeves the barrel and is light weight enough, especially taking the Mossberg’s overall length into consideration, to not adversely affect handling.

There is no doubt that using a moderated shotgun, especially a .410, can make a tremendous reduction in noise, even with normal cartridges! But with subsonic loads, like my preferred Express, Magsonic #5 shot the results are startling. For me to shoot I have a length of pull of 15½-inches and certainly when the stock is at the correct length these guns do point very naturally at where one wants to shoot, despite their appearance indicating otherwise.

The use of fibre wads is recommended, and indeed all the sub-sonics I have seen so far are fibre, I would also recommend taking the can off after each time it is used, or even part way through an outing if things seem to be getting noisier, as there will be a build-up of crud in the baffles. It is often quite surprising how much muck will fall out when it’s shaken! Also, even if you do put the moderator back on when in storage, don’t tighten it fully, as it can take some considerable force to remove, even after being soaked in a bucket of solvent. Which, may even require a trip to a gunsmith to be removed, I speak from bitter experience!

All-in-all, there’s nothing not to like about Saddlery and Gunroom’s .410, Mossberg 500 Hushpower. It’s without doubt the most efficient and cost-effective, rabbit control tool I have ever owned and one that will not break the bank. To illustrate, a piece of land that I am responsible for, the rabbit control used to take at least a week of ferreting and a further two of cage trapping in the winter to get them down to a manageable level. So, three weeks to take 250-300 rabbits, however with the Mossberg I can achieve that in nine or 10 hours’ worth of night work!