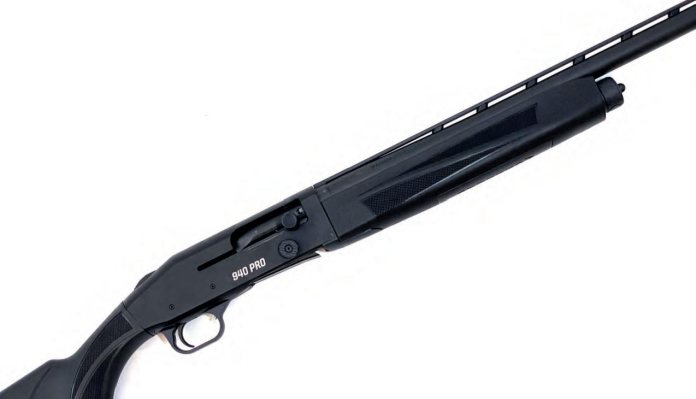 I am no stranger to Mossberg, as I have owned a 590 ‘Persuader’ pumpaction and currently own an MVP Varmint in .223. Both guns come with a certain ‘off the line’ feel, presenting themselves more like a tool than a piece of craftsmanship. However, the performance is there and my MVP rifle still manages 0.25-0.5” groups with 69-grain TMKs, plus I have even won my club’s annual competition with it! So, when I heard about the Mossberg 940 Pro Field semi-auto shotgun, I was keen to have a go.

The story starts with the 930 JM PRO, which was a project between Mossberg and the legend, Jerry Miculek (JM). The plan was to create a practical shotgun that was ready for 3-gun competition use, straight from the box. Features included a beefy gas system, enlarged controls, a bevelled loading gate for faster reloads and a 9-shot capacity. More recently, Mossberg released the 940 JM PRO, which shows several significant updates. Not wanting to miss out on all these improvements, sporting shooters demanded a version for clays and game, so the 940 Pro Field was born.

Lessons learnt from the 930 JM PRO have meant the gas system on the 940 has been improved. Being primarily aimed at the practical shooting discipline, the system is designed to take serious, prolonged punishment. Mossberg has not messed around, creating a system that will run up to 1500 rounds between cleans. It will also function reliably with a wide range of quality ammo from 2.75 to 3”.

The gas system consists of a large barrel-mounted gas cylinder, a piston assembly, a hard-anodized aluminium gold tube, the pusher assembly (identified by twin probes) and a large return spring. The piston and the magazine tube are even nickel boron-coated for reduced friction and smooth operation.

There is a large spring within the gas cylinder that helps to regulate any excess gas pressure from the larger 3” cartridges, thus reducing felt recoil. Once assembled, the range of motion for the entire system is very limited, so the piston never leaves the gas cylinder.

Also, instead of being attached directly to the bolt, the pusher assembly simply strikes it, sending the bolt backwards after the shot. These characteristics suggest that the reloading cycle should be quick, and it was!

Importantly, the manual provides detailed information on disassembly, servicing and cleaning etc, making it easy for the user to keep the gun running properly.

The receiver shows a matte finish and up top, it’s drilled and tapped for a Picatinny rail, so you can fit a red dot. Inside is the 940 Pro’s bolt assembly and it rides on top of a robust slide assembly. There is a ‘tail’ at the rear of this that is pushed through the back of the receiver into the stock, which contains a sprung cylinder that absorbs the recoil and returns the bolt forwards, picking up the next cartridge on the way.

To promote rapid operation, the bolt can be manipulated via the enlarged bolt handle, which protrudes 1” and shows a 14mm diameter. The bolt release button is also bigger, protruding 10mm and measuring 17mm in diameter. In use, these controls certainly aid function but by their very nature, they may also be more susceptible to catching on things out in the field.

There are two removable pins on the side of the receiver, and by using a punch these can be pushed out from either side to remove the trigger group for maintenance. A closer look at the trigger sees a plain blade housed in a guard that is large enough for a gloved finger. To the front, there is a silver cocked action indicator that protrudes when the gun is loaded. To the rear of the guard is a grub screw that is designed to offer the shooter the ability to reduce/remove any trigger overtravel. This means the trigger can be reset and used again faster, thus increasing the rate of fire of the shotgun. This is primarily aimed at the competition version, but a feature worth mentioning nonetheless! Another update sees that the internal hammer sear is also nickel boron-coated.

One of my favourite features is the tang safety catch. Its position makes it easy to operate and ambidextrous. It shows ridges for grip and simply moves forward for FIRE and rear for SAFE.

It doesn’t take long to empty a semiauto shotgun but it can take a while to reload it! So, it makes sense to make reloading as efficient as possible and this has been done in several ways. Look closely and the loading bay has been bevelled for easier access and the redesigned shell lifter is solid, showing a channel to direct the cartridge towards a bright orange anodized, coned-shaped magazine follower. The long length of the lifter, combined with the shape of the follower, means pinch-free loading as your thumb does not have to be inserted as far to secure the cartridge in the magazine.

The 940 Pro Field comes in 12-gauge only (3” chamber) with a 28” barrel and bears the fleur de lys proof mark, thus demonstrating that it can be used with steel shot. Externally, the barrel shows a matte finish and internally, it is chrome lined, along with the chamber and barrel extension, making it durable and corrosion-resistant. The muzzle shows Mossberg’s AccuChoke system and the gun comes with Improved Cylinder (IC), Modified (M) and Full (F). The chokes are quite short and can be fitted/ removed using the choke key provided.

Up top, the barrel shows a 10mm wide, ventilated rib with a red day-glow element at the muzzle for easy target acquisition. The rib and the supports are pretty thick-set and I feel that Mossberg could have shaved a bit of weight off here, as the large gas cylinder definitely puts a handful of weight in the palm of the support hand. Physics dictates that weight absorbs recoil but given the semi-auto action, I would have liked a bit less weight up front.

Something to hold on to

The shotgun comes with robust synthetic furniture that is in keeping with the rest of the gun. Up front, the 11” forend is supported at the receiver by a retainer and sits flush, allowing the loading hand to flow past the bevelled port during reloads. There are chequering panels on the sides and they are aggressive, meaning that after prolonged shooting you begin to notice them. Better than too little grip!

Significant improvements have been made to the butt stock, as the user can now add spacers to increase the length of pull (LOP) in 1/4” increments from 13” to 14 1/4”. Also, the shotgun comes with a comprehensive selection of plates that can be used to alter the rise or drop at heel from a .375” rise to a .250” drop. The shotgun comes set from the factory with no cast but the kit comes with the necessary components to add left or right cast – excellent! The instructions are detailed and easy to follow.

Finally, the grip is quite slim and sports the same chequering as the forend, making it very manageable for a wide range of people. The butt shows a sling stud that can be used in conjunction with the one located in the forend retention nut.

Overall, a great step forward by Mossberg, however, we tall people could do with more LOP spacers!

For the test, I fitted the modified choke, maxed out the LOP and left the gun with no cast on, simply because it came up to the eye perfectly, which is always nice! I headed to the clay ground and ran the gun hard with little or no rest between stands. I used some Gamebore Velocity+ (28-gram / No.8 / Fibre) as well as some lighter, Eley select 24- gram 7.5s, just to see how they cycled.

Function wise, everything worked as expected. The gun was quick and easy to load, the lighter Eley cartridges cycled flawlessly, along with the Gamebore, and the recoil impulse was very fast and deliberate, without being too aggressive. Ejection was enthusiastic, as expected, and the trigger was well weighted, as was the bolt release. All in all, no issues.

In use, I found fit was spot on and that the gun handled very well, even with that bit of extra weight mentioned earlier. However, the real surprise, and a hallmark of the Mossberg brand, was the excellent down range performance of the gun. It left me a little gobsmacked, to be honest! High birds, rabbits, L-R crossers, incomers etc. were all dealt with in good fashion. I even managed to consistently hit some targets I struggle to smoke with my own shotgun!

My only qualm was that I had to wear a glove on the support hand to stop the aggressive chequering from rubbing skin off and also because of the sheer amount of heat generated by the gas system – it got seriously warm! Not the end of the world, but worth making you aware of.

The 940 Pro Field is the surprise of the year for me. Although it looks pretty simple on the outside, Mossberg’s hard work inside means that this is one of those guns that proves you do not need to spend a lot to get great performance. It costs around £1000, you can adjust it to fit you and it delivers the goods down range with ruthless efficiency. Well done Mossberg!