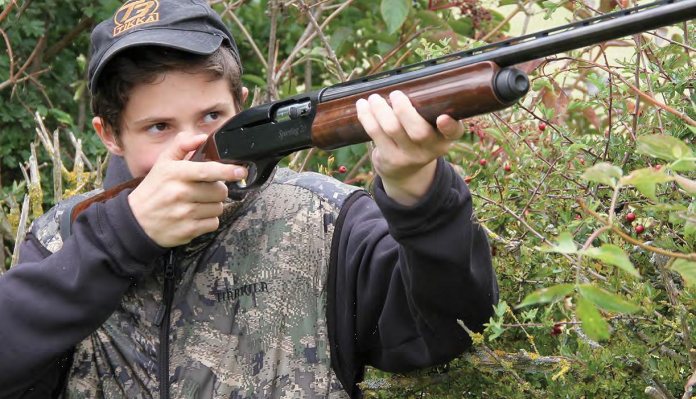 Having tested and bought a Remmy 1100 Sporting in .410, I was really looking forward to testing the bigger 20-gauge version. Sure, the design is unchanged for decades in real terms but that’s the appeal, a living classic that is still relevant today and shoots just as well.

There are plenty of camo clad synthetic semis and pumps on the market, which is great but some shooters like the old-world steel and walnut approach and this 20-gauge Sporting has both. Available in four calibres, 12g, 20g, 28g and .410, you have a semi-auto shotgun for any eventuality and the 20-gauge has to be probably the best all-rounder calibre. Suitable for youngsters, slighter framed shooters and those just wanting a lighter gun or connoisseur for that matter.

Classic sporting with a lower comb and slight cast it is both slim in profile yet still providing enough grip in all stances. The recoil pad is the wellrespected Decelerator make that has the plastic top to allow quick shouldering then soft rubber to grip here after. The length of pull is a little short at 14-inches, but fine and the drop at the comb is 1.5-inches.

The forend has a good length (as most semis) to hide the gas operating system beneath and this means a better overall hold too. In fact, long at 11.75-inches with a full-length finger groove/ rest for good balance from a seated or standing position. The chequering is machine cut with small diamond forms that covers the forend, underneath, side as well as the pistol grip area. You need it, as the stock, as most of these Remingtons, has that thick lacquer finish. I certainly prefer an oiled finish but having shot the smaller sibling 410 for a year, I have grown to like its weather resisting surface – just! It still hides the really good grade of wood under its synthetic embrace, and on all Sporting model 1100s, the walnut grade is higher. You have some really good figuring and colour with fancy grain patterning that really goes well with the blued steel surfaces.

The 28-inch barrel is the only option but well suited to the long, lean build of this semi and nicely proportioned to the calibre. There is the usual vented top rib of 7mm width but it’s light contoured and has 12 vents and twin beads; a silver one at 13-inches and a white bead at the muzzle for correct eye alignment.

These steel barrels are chambered for 3-inch shells and have a really good deep rich bluing that has a well polished finish. It looks very classy next to the walnut stock.
This barrel comes off when the forend knurled retaining nut is removed and the attached barrel ring is loosened from its piston hosing with a short tug.

The Rem Choke system on this 20-gauge extends past the barrel’s muzzle, like the .410 model; not my favourite look but it means that they are easily changed.
The complete complement of four chokes are included, Skeet, Improved Cylinder, light modified and modified, which are all quite open. These Rem Chokes are 2-inches long and with their lighter choking do not crowd the shot column and so produce very good and actually quite tight patterns, see field test.

Remington’s action design is timeless, made from a forged piece of steel billet and uses a gas operated system instead of inertia. The gases from the fired case are syphoned off from the barrel via a single hole drilled into the barrel at the base half way along. This is fed into the gas piston’s system, which consists of three parts, seal, piston, piston seal and O-ring that then push the twin operating bars attached to the bolt. The bolt itself bears bright polished surfaces and has a small knurled, slightly curved cocking handle that can be exchanged for aftermarket extended versions if one wishes. There is a small extractor claw and ejector spur cited in the left side of the action wall to fling the spent case clear, which it does with gusto.

Fir the last round and the bolt is held open and is then shut by depressing the small inner chromed button in the action cartridge lifter, simple and uncomplicated and reliable feeding.

I fed the 20-gauge loads down to 24-grams with no problems, except one make did not eject correctly due to slim rims to the cases. I like the look of these older styled Remingtons, as that long sloping action and slimline profile is nicely blued and enhanced by ‘Remington 1100’e engraved to the left side and ‘Sporting 20’ to the right. The trigger and safety are housed in the Remington one-piece cage that is attached to the action via two cross pins that are easily driven out with a punch to clean the un-burnt powder or debris from the trigger mechanism or action. The safety is a cross bolt design and works fine.

Sweet as a nut, as they say! I love these little semis; Remington have a knack for creating great handling and efficient autos, they should do, they have done it long enough. Its nice to test a semi that is not camo clad, I know reflections will worry some, not me, I even like the heavy lacquer, sort of! 1100s always handle well and this trim little 20-gauge is a honey. That slopping rear action leads the eye straight down the rib and you can effortlessly keep a swing going in front of your quarry. My son loves his 1100 410-gauge and also loved testing this model.

I fitted a ½ choke and this one seemed very tight and in fact the array of chokes provided start from skeet up to modified only, as many use the 20g for a light recoiling Skeet gun. First up, were the Eley Zenith shells, these are fibre wadded No. 6 shot of 28-gram weight.

They have always given a good, even spread in other 20-gauges and I was not disappointed, as here I had a total of 228 pellet strikes at 30-yards. A superbly dense inner 15-inch strike of 143 pellets with 85 around the circumference; so, at 45 yards, you would still have an effective pattern, nice. Next up were my son’s favourite in his 20-gauge, Hull Pro Twenty. These were the No. 7.5 shot size and a 24- gram loading. Again, a great pattern from the 1100 with a total of 303 pellet strikes distributed quite evenly with 139 outer and 164 inner hits; no clay or pigeon within normal ranges would be safe.

Game Bore Traditional Game load was again singing on song with its 28-gram load of No. 6 shot from its 65mm case. No loading problems at all and really good patterns too. I had 130 outer hits and 121 inner hits at 30-yards for a total of 251 strikes. A really good pigeon or pheasant load for that matter. Probably the best tested here. Finally, Hull Driven Grouse with its copper-plated shot and here tested in 25-gram No. 6 CU shot. This funnily had a few hang ups. which were a result of a shallow rim on some of the cases, so worth noting, not the Remy’s fault. With its larger No. 6 shot size, I had 178 total pellet strikes with 85 outer strikes in 30-inches and 93 inner 15-inch hits. Nice hard strikes but a bit hit and miss with regard reliable feeding.

I am biased, as I like and own 1100s and I may even grow to like that high gloss American lacquer finish to the stock. This Sporting 20-gauge version of the fabled 1100 semi-automatic series is a really nice handling gun.It also patterns so well too, putting many a shotgun four times its price to shame! It functioned flawlessly, except some dodgy shallow rimmed cases, and although I am not a fan of the extended chokes, they are very easy to change and throw superb patterns, so who am I to comment. A very good, very well finished shotgun and some lovely walnut too, to admire when waiting for those flighting ducks or pigeons.