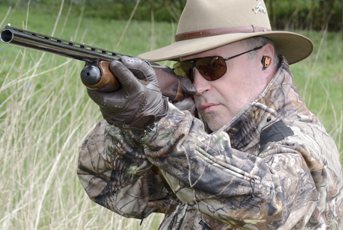 It’s probably safe to say that when Remington, America’s oldest gunmaker, launched their 870 pump-action way back in 1951 as the replacement for their reliable but rather outdated Model 31, little did they think their all American single barrel smoothbore would become the world’s best seller, a total of ten million having found owners by the end of 2009. Designed by four engineers namely, L. Ray Crittendon, Phillip Haskell, Ellis Hailston and G.E. Pinckney who started work on the design in early 1947 and utilising parts from Remington’s then new 11-48 semi-auto, the idea was to give the all-round American shotgunner an ultra-reliable, unfailing single barrel repeater that would last for years on end.

With sales still showing no signs of diminishing, who knows what the final total will eventually be, that’s if Remington ever actually stop manufacturing them. And apart from the 870’s continuing enduring appeal the other reason this pumper continues to find favour is that there isn’t a shotgunning task it hasn’t been able to conquer; the game, skeet, sporting and trap variations having over the years awarded their owners with the world’s highest shooting accolades. And yes, before you ask, I own a basic 870 Express Magnum and have done for years; it’s one of the best pigeon and allround shotguns I’ve ever owned.

Homage
Add into the mix the fact that the 870 has undergone more shotgun reviews, been lauded and described by more shooting pundits, and featured in more shooting stories than any other shotgun and it makes this review more a biography than anything else, a verbal homage to one of the grand old men of shooting that demands deference and respect. And if you think that the 870 is nothing more than a pumper with two or three variations, think again.

The 870 is available in every gauge from 12 bore down to .410, the 12 bore alone available in eighty-one grades, styles, configurations and purpose specific models including military, game and competition, including a stunning trap variation, Bicentennial Commemorative, ‘Ducks Unlimited’, Premier, Tournament, riot, rifled slug, various matched pairs and left-handed versions along with various options to upgrade. There were even fifteen variants at its original launch, a listing no other manufacturer has ever come close to equalling.

There’s even the Home Defence model, a short barrelled 870 that’s primarily designed to hold and fire alternate rounds of ‘OO’ Buckshot and slug. The sound of the forend slide chambering its first round is, according to American sources, one of the most recognisable sounds there is and guaranteed to strike fear into the heart of what are euphemistically referred to as ‘perpetrators’. So basically there isn’t a single purpose or target a Remington 870 can’t turn its muzzle towards. One point though, whilst the Americans can own any of the 870 models and types, us Brits can only dream about ownership since most shooters over here wouldn’t be allowed to own the majority of them.

Glossy Cover
The 870 comes with a set of three flush fit Rem-Chokes, choke key, trigger lock and a sachet of Rem Oil. In this test we have a 28” Field grade model although if you prefer a different barrel length, you can fit all the alternative lengths without any modifications, the 870 being one of the first of its type to be conceived and built as a switchbarrel shotgun. The current price of an extra barrel is around £250.

The first thing that hits you is the heavily glossed American walnut stock and forend complete with fine cut panels of chequering that flare out into diamonds around the grip and stock head, the heel of the grip finished off with a cap depicting the company’s original Remington Arms shield and logo. The stock is complimented by a modern, deep and extremely soft Supercell recoil pad whilst the stock head’s fit against the steel billet receiver is proof that these guns are still made with care and attention. The forend slide is fat and well rounded with deep finger grooves along either side, the wraparound panel of chequering ensuring the shooter has the exact levels of grasp and control when holding and cycling the Wingmaster.

Black Beauty
The 3” chambered barrel has a lustrous gloss black finish and features a 7mm vented cross-cut rib, a prominent white bead at the muzzle and smaller chromed mid-rib bead. The magazine tube locates via a large barrel ring and knurled mag cap, the rest of the barrel sitting between the twin action slides that once run in are slick and efficient and the envy of other pump-action manufacturers.

It’s the short magazine extension that’s always been the heart of the 870. A deep notch cut into the top of the extension allows a locking block that sits on the top of the chromed, single extraction claw bolt to engage and so hold the bolt, receiver and barrel together as one secure unit until the chambered round has been discharged, the firing of which then allowing the block to disengage and the forend slide to travel rearwards so ejecting the spent shell case and chambering the next live round.

Turn the 870 upside down and another of the 870’s features comes into view. The full width shell-lifter has what’s referred to as a ‘U’ cut into it. Outwardly this cut out has little if any purposes until you dig a little deeper. Originally the shell-lifter was solid which occasionally caused the system to bind. Remington’s engineers discovered that cutting a ‘U’ into the lifter allowed it to flex and so the problem was solved and that’s why this seemingly meaningless, often overlooked feature is there.

To the rear of the lifter an alloy trigger-guard houses the gold-plated, none adjustable trigger with the cross-bolt safety to the rear and the bolt release at the front on the left -hand side. Just above the guard, flush with the receiver, are two split pins that once gently removed allow the entire trigger mechanism to be detached and cleaned, all the owner requires is a small drift and a light hammer to float the pins out sideways. And there you have it, a comprehensive description of an 870 Wingmaster. But looks and descriptions aren’t what Remington’s 870 Wingmaster is about, instead it’s a shotgun that was and is designed to deliver the goods irrespective of when, what and where.

As Described
Heading to Bond & Bywater’s shooting ground with ¼ choke fitted, a minute or two with the Arrow Laser Shot confirmed the 870 shot fl at and looked exactly where I did. The Wingmaster doesn’t suffer from short dimensions, every measurement a good full size. The overall length is 48” whilst the gun tips the scales at 7lbs 4oz that centres directly below the union of the chamber and bolt giving the Wingmaster almost neutral handling traits, the feel and handling exactly as Remington describe.

Drops at comb and heel are 17/16” and 25/16” with a length of pull at 14 1/8” and weight of pull being 6lbs average, all of which mean that for the average adult, the 870 Wingmaster is an almost perfect fit, just as the gun was originally intended. So loading up with 28g Express World Cups and Supreme Competition along with 36g Supreme Game, it was up to the Wingmaster to prove its worth. And prove it, it did.

The 870 was breaking clays from the first shot fired whilst the gun’s reputation as possessing the most refined pump-action ever devised was more than confirmed whilst the famous 870 trick with the forend slide was quickly mastered. The downside to any pump-action is that between shots the shooter has to almost dismount the gun or lose line of sight on the next target whilst carrying out the cyclic process. And to a degree, yes you do, although you’ll quickly find you can pump with the 870 still mounted. Although the days of ‘fire on the slam’ have long gone, you can still get yourself to a position where you’re almost as fast as the chap with the semi – auto.

By applying just a small amount of gentle rearward pressure on the forend as soon as the first shot is fired the forend will quickly travel the required 4” backwards before you slam it forwards over the same short distance, the next round chambered and the bolt locked into position. As regards the exact amount of pressure, it’s a matter of feel, to much or too little and it won’t work. However, get it right and you’ll be surprised how quickly you become an accomplished 870 shooter.

At just over 7lbs the Wingmaster isn’t a lightweight shotgun, the steel receiver making its presence felt. And yes, initially you have to drive it along to get the swing started but once under power off it goes to a degree you quickly discover how manoeuvrable and refined of balance the 870 actually is. Recoil even with larger loads is more than manageable, the soft recoil pad removing the sting from even the most aggressive loads, a full evening on crows and squirrels confirmed that it’s a pleasurable gun to shoot over extended periods.

Whilst the Wingmaster is at heart now an old fashioned shotgun and doesn’t feature all the latest technology that many manufacturers including Remington make great of, the 870 is still a remarkable shotgun to shoot. Yes the design has in theory been surpassed but it’s never actually been bettered to a degree that Remington’s own futuristic looking, rubber armoured 887 Nitromag is to all intents and purposes an 870, proof positive that when Remington want a new pump-action shotgun, its still the 870 they turn to.

Less Than Suggested
Given my suggestions that those seeking a sensible singlebarrelled shotgun head for your dealer’s Turkish department due to the now excellent quality and more importantly the price, what on earth am I doing waxing lyrical about an aged American pump, especially one that has a suggested retail price of £1,250. Listen up, not only is Remington’s 870 one of, if not the most reliable shotgun you’ll ever own, most dealers will be more than able to offer a seriously substantial discount on the price, making the Wingmaster a seriously tempting proposition. And if your dealer won’t talk sense, go to another one.

Likewise, whilst it’ll never have the kudos or anything like the looks of the Wingmaster, the entry level Express versions, even before you’ve negotiated a more advantageous price, have a full retail of £670 but once again expect to pay less. The woodwork isn’t as nice whilst the receiver and barrel have an anodised finish emphasising the Express’ workaday, practical design. However, it’s still a Remington 870 with all the heritage of its more illustrious and glamorous famous brethren.

The Wingmaster though is still the 870 to go for, the name, looks, feel, handling and reputation meaning there’s just something almost mythical about this model of Remington. Possessing that unique something, this and all Wingmasters are shotguns you want to pick up and use, a genuine American icon and a piece of shooting history.

It’s still a tremendous gun to shoot and is guaranteed to bring a smile to your face as it proves yet again that this Remington still works as well as it ever did and kills its targets as fast, cleanly and efficiently as even the most modern 12 bore. Owning a classic of any type usually costs serious money and tends to be used sparingly; a Wingmaster on the other hand isn’t that badly priced and almost demands to be used on a daily basis,since unless you elect to seek out an early model, the gun is still brand new. Not many sixty year olds can lay claim to that, can they? GM