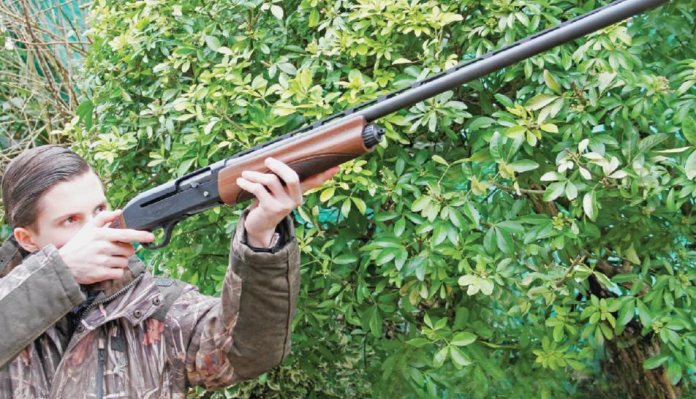 With Remington and semiautomatic shotguns, one’s mind instantly turns to the iconic 1100 series. I have owned a few of these and their timeless classic looks and true grit still hold their appeal today. But, as with most things, companies need to evolve and design new products and flow with the times, and the V3 series of shotguns is Remington`s value semi-auto. There is a new operating gas system, namely the Versa Port which allows use of 2¾- to 3-inch cartridges to function. It also is reliable and attributes towards low felt recoil.

I have tested the Wildfowl version but this time the walnut is up for testing, as many people still like the traditional look and feel of walnut, even if it is on a semi-automatic. All chambered for 3-inch shells, steel proofed and 28-inch length barrels with some models available in 26-inch lengths to, the V3 is great value semi.

This 28-inch barrel is ideal for most shooting scenarios, although a shorter 26-incher with a sound moderator fitted has a real appeal I must admit.

You are supplied with a full complement of chokes to suit your choice of ammunition and game preference. The Rem choke system has five chokes supplied from cylinder to full choke and steel proofed up to ½ choke as usual. The flush fit to the barrel muzzle looks clean but, as I have mentioned before, the choke designation is printed on the side of the choke body, so not having the usual notches for choke size visible may be an issue to some?

The barrel is a slender contoured model which I like as it helps reduce weight, and is finished in a matt blued which does work well with the matt lacquer walnut stock, both practical and aesthetically pleasing. There is a ventilated rib of 7mm width and steel bead halfway down and a white bead up at the muzzle. This is a good arrangement for high visibility with the slim rib to see the game around the barrel area and the twin sights align and pick up game easily.

The chambering is for 3-inch shells, so any 2¾- to 3-inch shells can be shot, and that includes steel shot. Remington state loads from 1oz to magnum loads, no problems let`s see later in the ammo test.

The Versa Port system uses a series of ports drilled directly through the barrel just in front of the forcing cone area, eight ports in total that direct the gases to the twin pistons on firing. You have a single unit or cradle two-inches from the chamber end that houses twin gas push rods that in turn engage with the base of the bolt when the barrel is fitted.

This is a slick and smooth operating system that does have a good reputation for actually being good at selfcleaning and thus reliable, even after neglect from its owner or excessive use.

The Versa Port system is actually a clever design and it works like this: when a magnum 3-inch load is chambered half the ports from the barrel are thus covered, so just the right amount of gas is diverted to operate the action.

Conversely with a shorter 2¾-inch shell you then have all eight gas ports open and this directs all the gases to the bolt for a reliable function.

This equates to a reliable and simple gas operating system that needs little maintenance and can digest all many of cartridge sizes and loads.

The action is aluminium and matt black anodised for nonreflective properties and has a top drilled and tapped for a scope mount base, if desired. The bolt handle is quite large and serrated enough so a good hold is manageable with the bolt holding open after the last shot.

There is a magazine cut off just behind the magazine lifter that when pushed allows the follower, and slide the mag cut off latch forward to keep the follower in the up position, so a round can be extracted from the chamber without another being fed into the chamber.

Nice for a quick-change cartridge situation if you need too or for a quick un-load without emptying a mag.

The action works very smoothly, as this system does not use the long operating springs inside the stock to reciprocate the bolt mechanism. The use of internal action springs, coiled to locate to a substructure that attaches to the barrels and not the forend, shortens the process. This means all the gas operation system is closer to the action itself and not further up the barrel. This certainly aids in speed and benefits of balance.

You therefore have a shorter action overall at 8.65-inches long and the bolt itself locks into the back of the barrel. The rotating head, which is separate to the bolt body, is used to lock its four locking lugs into small abutments in the chamber end. There is a large single extractor claw and an ejector rod sited in the left inner action wall. You therefore have a strong and safe lock up and positive ejection, just what you need on a semi 12g.

Trigger-wise, nice and simple with a single drop out unit like the other Remington shotguns, but the V3 has a wider trigger guard and a smooth wide trigger blade.

The safety is the usual cross bolt button sited in the trigger guard behind the trigger itself and just blocks the movement of the trigger.

Most semis these days come with synthetic stocks, which I do prefer, but walnut still has its followers and does look nice on this compact Remington semi-automatic. It’s a typical sporter profile, quite light but with good adjustment at the action attachment area with shims to correct cast, etc. as you like. Walnut grade is standard but is typically dark red American stained and has a matt lacquer, which does work well. There is a super large and soft Supercell recoil pad that is brilliant at dampening any recoil left form the Versa Port system.

Length of pull is short, as with all semis, at 13.75-inches, although the forend is also short due to the porting gas arrangement. The forend, at 10-inches long, has a good full profile for grip, with longer finger groove for extra grip. The underside is stippled and there are three vents each side at the top rear of the forend to allow gases to escape on firing, being vented from the twin gas pistons.

What is not really apparent until you pick up the V3 is how well it handles as it feels light, points naturally and swings very fast and excellent overall balance.

I fitted the ½ choke and shot four differing brands at the pattern boards at 30-yards.

This steel 32-gram loading of FE4 shot is a really good steel loading and if you fancy shooting a few ducks with the V3 then this is the load. We had a total of 139 pellet strikes distributed with 42 inner hits and the remaining 97 within the 30-inch circle. Nicely distributed, a few gaps but for a 32-gram load nice on the shoulder too.

Another good all-rounder for pigeon as well as its intended name, game, this 28-gram loading is on the 1oz minimum limit for function in the V3 and they all cycled perfectly. The payload of No6 lead shot gave a good even pattern from the ½ choke with 220 overall hits and 77 inner strikes within 15-inches and 143 around the periphery. The V3 shot this very well with very little felt recoil too.

This 32-gram No 6 shot load with its fibre wad also plastic wadded if you like shot a total 268 No 6 pellets on the board with 87 hits in the inner 15-inches and the remaining 181 pellets to the outer sectors. Nice even and dense patterns form the V3 barrel.

Another performance loading with 32-grams of No 5 shot this time achieved a dense pattern with 181 total hits with 66 inner and 116 outer hits. Hard hitting down range and not on the shoulder.

The heart of the V3 is actually a bit of high-tech that is not just for show and gives the Remington great handling and reliability. You need to handle and ideally fire a V3 to get the true worth of this Versa Port system, and then you will see now effective and good this V3 is at consuming many cartridge sizes and weights as well as throwing some impressive patterns down range.