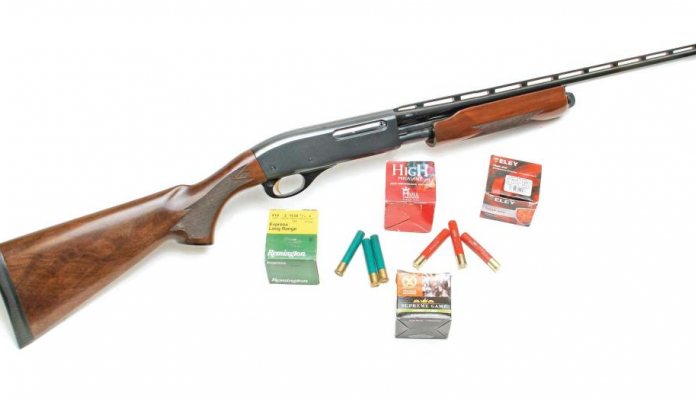 This classic has a lot going for it and appeals to generations of shotgunners of all ages and stature. Firstly, being a .410 gauge, it is both at home in the hands of beginners and experienced shots who enjoy the challenge of using one. When fitted with a suitable choke and fed the correct diet of cartridges, it has the great ability to tackle vermin, both fur and feather with ease. Lastly, it has that timeless charm of a pump-action that only the Americans seem to capture so well.

The Remington Wingmaster 870’s design has barely changed since its conception back in the early 50’s because they got it right the first time. There have been tweaks to materials, grades of wood and the addition of different ribs but these are really the only differences from the originals. Best of all, these older Remmy 870’s were all-steel, with nice blueing and of course a walnut stock with the only finish the Americans wanted, thick gloss lacquer!

Here we have a lovely example that retains all the excellent wood that seems to adorn these older models. I picked this one up from Francis Lovell Guns in Witney for my son Jake, but soon decided sod that, I’m keeping it! The gun came with a blued steel barrel as well as a spare one with a more recent matt blue finish, which is practical but takes away some of the older classic charm. These shotguns command good money, well the smaller calibres do, like this .410 and the 28-bore models. Including the additional tube it cost me £675, and in my opinion is worth every penny, as I always end up smiling when using it.

The design of the furniture is basic but functional and the walnut used is often of a good standard. The forend, which is used as the ‘pumping’ handle is generous and well-rounded. It comes with wrap-around checkering for extra grip and also includes finger grooves on both sides. I like the butt as there is little cast, so good for use in both shoulders, and it has a long rake too. The pistol grip is also quite slim but includes machine cut checkering. The wood has a nice rich colour to it and shows some good grain as well, but as always the older Remingtons have an ugly, thick lacquer coating. This is good for repelling water and dirt, but personally I would get rid of it and use oil which really enhances what is underneath.

The action has that classic Remington sloped rear section profile and is an all-steel construction. They use a solid block of it for maximum strength and reliability, that is carefully machined and polished on the outside. These actions are calibre sized so the .410 version is much smaller than its bigger 12-bore brother. As a result, they handle better and have a lovely trim streamline look. The bolt is a single machined steel-type with a polished finish, contrasting the blued steel action nicely. It has a quite large, single claw extractor that provides a good grip on the rim of the case. The cartridges are ejected via a protrusion at the rear of the barrel spur. With the bolt closed, a large lug locks into the recess, ensuring a positive lock-up. There is a small catch positioned to the left of the trigger guard which can be pushed to release it when required.

The design incorporates a slide bar on each side, connecting the forend to the action and preventing binding or twisting as you cycle/pump it. The cartridges are loaded via a large tongue-shaped lifter which is solid on older models like this, and ventilated on newer ones. The trigger is a nonadjustable, one-piece unit that is easily removed by drifting out the two pins that retain it. This particular gun has the enlarged alloy trigger guard which to my mind is not as nice as a steel one. The safety catch remains the same, just a push button cross-bolt that blocks the movement of the trigger blade.

The barrels are very nicely proportioned to the smaller size of the cartridge and they are only 25” long, which I like. The tube itself has a thin profile but thick side walls, so there is plenty of strength and wear built into it. They come with fixed chokes, one coming with modified (½) and the other full, which are both ideal for the calibre. The 3” chambering allows me to use all the various cartridge lengths and being a pumpaction it all feeds reliably. I also like the raised rib which looks like it is high, but this is just because the barrels are so small in comparison. It is heavily serrated to reduce glare and includes twin sighting beads. There is a steel one just over halfway along the barrel and a white one located at the muzzle.

Overall, I like this old gun a lot. It’s a bit basic like me and the rifle-like handling and profile suit my style of shotgun shooting to a tea. It’s not very long at 45.75” and weighs a modest 6.75lbs, so it just handles superbly and feels well built and sturdy. It is worth checking for wear marks on the magazine tube, as these would indicate a lot of use and thus closer scrutiny.