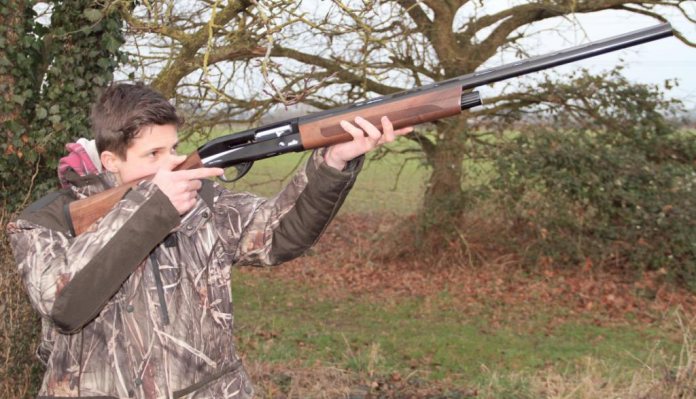 I tested a Revo 410 over and under recently and was impressed, not only at the price, but the good workmanship and patterns thrown. This time, it’s the turn of the bigger Revo semi-automatic 12-gauge that is equally well made and reasonably priced.

Another Turkish gun I hear you say? Yes, so what, they are good value and are great for beginners and seasoned shooters alike. This is made by Khan Arms and marked on the barrel Arthemis Silah San. For £466 you get a three multi choked barrel, walnut stocked semi automatic with fancy styled action that makes the perfect ‘do anything’ shotgun.

It’s a plain looking stock by Turkish standards, in that I mean simple lines and no fancy chequering scheme. In fact, the walnut has a nice lighter tone to it and has some good figuring through the butt stock area, befitting its deluxe status. The finish though is very dry and lacking that smooth oiled finished look and feel. This however can be corrected with some decent and diligent application of Trade Secrets’ oil finish and a bit of elbow grease. Also, as the tests progressed, the usual sweat and handling buffs up the walnut a treat. The pistol grip is quite full at the action end where it is normally slim and the chequering here starts off slim and widens at the end of the grip. This slim chequering, which is quite well cut, is also reflected in the long forend grip area. There is a black rubber recoil pad and the length of pull is a decent 14.5-inches and the forend is large, with the customary finger ledge running along the top edge on both sides.

Overall length and layout is pretty standard, with a 28-inch barrel multi choke system with a three-inch chamber. You have a good level of bluing to the surfaces and the Revo is supplied with a choke key and three chokes of full, half and quarter that are all flush fitting.

The barrel has a certificate of proof testing to 1320-bar, so good for high pressure rounds.

The rib is 8mm wide and sports a red Day-Glo foresight bead, with seven progressively smaller vents below the rib to form an air cooling and quite flat rib profile. The action, by contrast, is a bit more exotic in appearance. It has a slim, sweptback rear section, with rather large trigger guard. There is a black gloss anodised top section separated from the lower section by a recessed and silver chevron for a matt finish bottom section of ali. The top is dovetailed for five inches with 11mm rails, so is good for a spot of buck or slugging with red dot sights!

The bolt is well-made and has a bright finish with a prominent Revo Matrix logo imprinted on it and a nice long, grooved cocking handle that’s very easy to get a grip on. You also have a large separate rotating bolt head that has two large locking lugs with an elliptical profile that lock directly into the back of the barrel’s chamber for a strong union. There is also a single claw extractor to the righthand face of the bolt system and plunger type recessed ejector spur for a positive and reliable empty cartridge ejection. The bolt stays open on the last round and is released by a small chromed button on the lower right side of the action. It also allows the ventilated loading ramp to be raised. This is an inertia operated recoil system and not gas operated, so is reliable with all manner of cartridge types and payloads, except the very light weights of 21-grams.

The trigger, as stated earlier, is large. To me, it looks a bit odd and spoils the good lines of the Revo but I can see why. It adds interest to the styling and houses the cross-bolt safety button and also the addition of a small blued lever in front of it. This lever, when pressed upwards, keeps the bolt open when the chamber has around in it and thus allows safe extraction of the round when the trigger/action is cocked, a nice safety feature and speedy cartridge change facility.

Out in the field

This Revo has a good balance to it and instinctively comes to the shoulder well, despite the over-full pistol grip and nonplastic tipped rubber recoil pad that snagged a few times on the coat. The cycling was fast, with no hang ups and even the felt recoil was well-distributed and felt very comfortable to shoot, so good for prolonged pigeon decoying sessions.

Patterning wise, I was again amazed at how a budget gun (let’s be honest!) shot so well. I fitted a ¼ choke i.e. four slots to the outer edge to indicate this size. I had to do a double take, as it shot tight patterns for a ¼ or improved cylinder barrel but the overall patterns were amazing to be frank!

First up were the Eley Grand Prix loads, these utilise 32-grams of No. 6 shot with a fibre wad. I had, at 30-yards, a total of 247 pellets on target, with a dense 86 pellets within the inner 15-inch ring and 161 penetrating the outer circumference. Dense, even, great all round load in this Revo.

Next were the Game Bore Clear Pigeon. What a load! With 30-grams No. 6 shot in a 70mm case. These shot exceptionally consistent and even patterns, with a total of 252 pellets on the board, with an even spread between the inner and outer rings of 127 and 125 respectively. An amazing load that would make the perfect pigeon decoying load, as it was very light on the shoulder too.

Thirdly, the Lyalvale Supreme Game with a load of 30-grams of No. 5 shot from the 2½ inch case also gave a fine performance. These achieved 220 pellets in total striking the pattern board, with a good density of 95 pellets to the inner 15-inches and 125 pellets in the outer area. A little top heavy but still nice and even and very light recoil in the Revo.

Finally, the Game Bore Pure Gold, shooting 28-gram with No. 6 shot and fibre version. Exactly the same pellet strike as the Supreme Game, at 220 pellets total but more evenly spread, with 67 in the inner ring and 153 spread around the rest of the board. A more open and spread pattern, as you would expect, so nice for walked up partridge or woodcock or bolting rabbits.

Hard not to be impressed really, especially for a semi automatic and at a price of only £466 it out shot a lot of double shotguns I have tested costing four times as much, makes you think?

Good handling, reliable if a little unfinished on the stock coating and odd looking trigger guard but for those wanting a hard-working and obviously good patterning gun, if the pattern boards are anything to go by, would be pleased with this Revo Matrix semi.