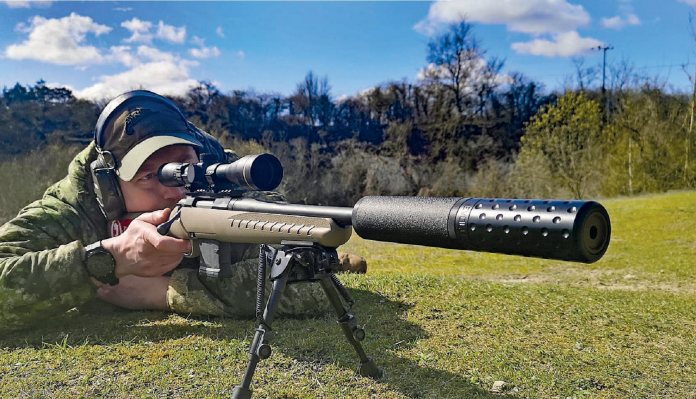 The Ruger American product range consists of a selection of affordable sporting rifles. In the USA, there is a choice of seven different versions, which are available in loads of calibres from .223 all the way up to .450 Bushmaster, with a choice of barrel lengths too.

Drawn to its compact dimensions and to a calibre I had not tried before, I opted to test a Ranch chambered in .300 BLK, keen to see what this little rifle from Ruger was capable of.

I like a short, manoeuvrable rifle and straight from the box, I was quite taken with the handling characteristics of the Ranch. It is fitted with a petite sporting, ambidextrous, lightweight synthetic stock that includes sling studs and follows a basic design familiar to us all. It sounds a bit ‘plasticky’ when tapped but feels pleasantly grippy and impressively strong.

The design shows a 1” thick rubber recoil pad, secured via two screws, giving the rifle a length of pull (LOP) of 13.75”. A little short for me but perfectly manageable on a sporting rifle such as this. Although comfortable, the comb is dead level so the natural head position is a bit low when using a scope. If it was my rifle, I would fit a rear stock bag/cheek rest to sort that.

The pistol grip is on the small side and is fairly narrow, however, it shows palm swells on both sides to help fill the firing hand as well as some raised grip serrations. The reach to the trigger was a little short for me but in no way uncomfortable. Up at the front, the forend extends forwards 9.5” from the action and shows a very comfortable, rounded underside and tip. Along its length, on the sides, it shows effective textured cut-outs/serrations for grip, with a nice finger/thumb groove incorporated into the design.

Instead of a traditional bottom metal, the trigger guard is part of the stock mould and the magazine well is a separate component. It appears friction fitted and is secured in position using the two action screws. These continue through two metal integral bedding blocks which make up Ruger’s patented Power Bedding System. This not only positively locates the receiver in the stock but allows the user to torque up the screws without crushing anything. Further investigation showed that the barrel was comfortably free-floated all the way back to the barrel nut, helping to prevent it from coming into contact with the forend during shooting. The inside of the forend includes a heavy lattice structure along its entire length, which provides extra strength.

The cold hammer-forged barrel is just 16.12” long, giving the rifle an overall length of just 36” unmoderated. It shows a medium-weight profile that tapers from a 29.5mm diameter at the barrel nut to 18.6mm at the muzzle, where it is threaded 5/8”-24. In Blackout, it comes with a 1:7” right-hand twist which is very common for the calibre.

The Ruger American action shares a quality matte black finish with the barrel and up top, it shows a factory fitted 6” Picatinny rail. The receiver shows a gas escape hole on each side, a 2.75” ejection port and a bolt release tab located rear/left.

The one-piece, chrome finished bolt shows three lugs giving it a nice 70° throw, so there is enough clearance between the scopes eyepiece and the bolt’s 2.25” handle with 18mm teardrop knob. The bolt face shows a single sprung ejector and an extractor.

The Ruger Marksman trigger is a nice single-stage unit that shows a blade-in-blade build similar to the Savage Accutrigger. With the barrelled action removed from the stock, the unit can be safely adjusted by the user from 3 to 5lbs, and out of the box, mine broke at a pleasant 3lbs 10oz.

Located at the rear of the plastic bolt shroud there is a cocked action indicator, which can be seen and felt. Behind this is a 2-position tang safety catch which is easy to see and operate, pushing Forward for FIRE and Rear for SAFE. It does not lock the bolt.

Even though the rifle is chambered in .300 BLK, feed is from a 5.56mm 10-round ARpattern Magpul P-Mag, which is a proven design. Good news as it means 20 or even 30-round versions will fit too! The 10-rounder slotted into the rifle easily and although there is some slack, feed proved 100% reliable. Once empty, the follower acts as a bolt hold-open catch, which can probably be viewed as an advantage or disadvantage depending on your preference. The mag catch is recessed to prevent accidental release and is located on the right-hand side, at the rear of the mag well. Once depressed, the magazine falls freely from the rifle. A nice touch.

For the test, Viking Arms provided a Leupold VX-Freedom 3-9x40 scope and some mounts. I would have preferred a bit more magnification but at the same time, the scope’s small dimensions seemed to match those of the rifle, making for a very nice package. I also spun on a Wildcat Evolution moderator and once fitted, the overall length of the rifle increased to just 41.5”, which is not too bad at all!

Some Remington UMC Ammunition was kindly provided by Raytrade UK and consisted of a supersonic load using a 120-grain bullet and a subsonic offering using a 220-grain projectile.

After bore sighting the rifle and a bit of dry firing I was soon comfortable. The trigger is a pleasure to use as the inner blade almost feels like the first stage of the 2-stage mechanism. There is a tiny bit of creep but it breaks predictably.

I was pleased to find that I could consistently print sub-MOA, 3-shot groups at 110 yards using the supersonic load, with typical groups measuring 0.7-0.8” and the best coming in at 0.692”. So good performance from a rifle at this price point and with more magnification, I am sure those groups could have been even smaller.

I was looking forward to trying out the subsonic ammo and although it was incredibly quiet, the Ranch did not like it at all and I really struggled to get anything resembling a group! Given that the rifle had already proved itself, I wasn’t worried and am confident a spot of reloading or the trialling of some different factory offerings would generate different results. It’s a shame that I couldn’t get hold of any suitable powders for reloading at the time of writing.

The test rifle was brand new and in use I found the bolt stuttered a bit during operation, however, I quickly adapted and operated the bolt with more deliberate movements, putting that trait to bed. Feed and function was 100% with strong ejection, which always generates confidence in the rifle.

I must admit that having researched Blackout, I struggled to identify its uses in the UK. If you plan on using supersonic loads for hunting/pest control, then .223/5.56 would be a better choice. If you are going to use subsonic ammo to keep the noise down, then there are some downsides. The low velocity means a loopy trajectory, poor expansion on target and a high ricochet risk.

However, after using the Ranch and the .300 BLK cartridge, I think it would be a great choice for someone looking for something new to use at their club. The cartridge doesn’t use much powder (making it cheap to reload), produces very little recoil and generates minimal heat. Combined with the potential to be very quiet, a Ranch in .300 BLK can be shot all day long and thoroughly enjoyed!

I have enjoyed my time with the Ruger American Ranch Rifle. It is accurate, making it fun to use on the range and its lightweight, compact form makes it easy to handle and very pointable out in the field. A .223/5.56 version would be my choice, unless I needed more punch, in which case I would look at a Predator. The construction of the stock is excellent and everything does exactly what it says on the tin. Ruger has made some good decisions when deciding to use a P-Mag, fit a Picatinny rail and include a user-adjustable trigger. Simple, affordable, reliable, capable and fun.