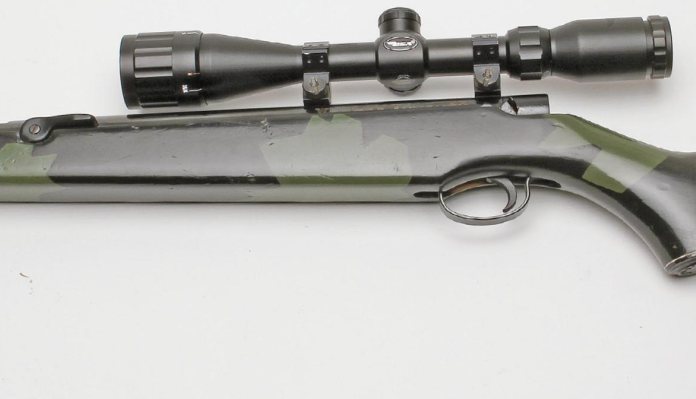 I admired the Webley Hawk MK 2 air rifles with their replacement .177 and .22 barrel system which I never owned but the elegant Osprey full sized side lever rifle was what I wanted. I never did afford one but that design spawned a Target version and several smaller types.

The Webley Tracker was an ultra short compact version of the Osprey in looks (launched alongside the full length Viscount in the early 1980`s), and was an instant hit with hunters. I always wanted the camo version, which was only ever available for 6 months, so now quite rare. Imagine my delight, when I managed to pick one up recently and despite a few knocks, it shoots really well.

Webley`s have that old world British quality and real steel parts if you know what I mean, and at 7.5 lbs weight and 37”, the Tracker makes for a fast handling rifle! Outwardly it looked like an Osprey the internal components were all new and came from the Vulcan breakbarrel model. This had a modified spring piston system with new PTFE washer for consistent power and a rubber damper for a smoother cycling on firing.

This meant the Tracker shot fairly smoothly compared to previous models, and right up to the 12 ft/lbs legal energy limit. Available in both .177 and .22 calibres, .22 is more common so .177s are worth more second hand. Mine’s a .177 luckily so I’m doubly pleased. The barrel is fixed to the action and loaded via a tap system, where I seem to remember there are no seals just good old engineering tolerances to keep it air tight. Bear that in mind this is an area to check for leaks on any second hand buy.

Cocking is achieved by the small side lever to the right of the action. Grip it, press the release catch and pull down; an anti-bear trap is fitted! It’s a little awkward but you get used to it. As mentioned, all the metalwork has the superb W&S pedigree, deep bluing and very well finished. The firing cycle is still harsh compared to some, and due to the short barrel; it’s loud, however, a good tune up would work wonders. Webley’s triggers were always their downfall, and this one releases at around 4lbs.

The stock, however, is pleasing. It may be only beech with a simple design but it is actually quite comfortable and matches the short stature of the Tracker. As for the camo, it’s a two-tone green and black pattern of large irregular leaf patterns, and I get the impression these varied depending on who sprayed it at the factory!

The older models came with a vented muzzle brake for looks only and held in place by two O-rings - a unique look for the Tracker. The standard rear sight fixture had a covering plate so people were expected to go scope only. One other point of interest concerns the Tracker’s popularity with enthusiasts who wanted to fit an after-market gas-ram, so keep an eye out to avoid that, if you want original spec! As for values, expect to pay £125-£150 for an example in reasonable condition.

In short, brilliant; re-live your youth with a real classic, ultra short, well built and compact little hunter, with all the power and accuracy you would expect from Webley. Yes, the side-lever operation is noisy, but with that super short barrel, and flashy camo pattern timber, this plucky little rifle has great character.