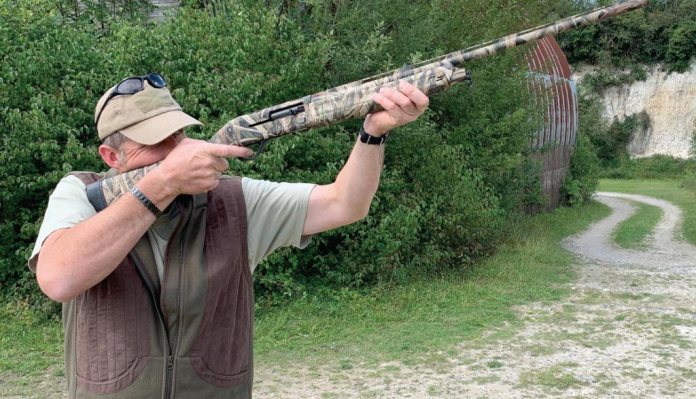 When Winchester launched their SX3 a few years ago, it was always inevitable that it would be improved upon and so the SX4 was born. Now this new model is available in 20 as well as 12 bore and so to the test gun, which is a 3-shot twenty in Mossy Oak Shadow Grass Blades camo. So, what does it offer? There are weight savings to be made and, for some shooters, these features combined with the feel of a smaller framed gun, could make their whole shooting experience much more pleasurable. The quality of shotgun cartridges continues to improve at a startling rate and the reality is for most shooting a 20 bore will perform every bit as well as a 12 will.

As with the SX3, the SX4 twenty uses their Active valve gas system. This automatically self-adjusts to allocate the correct gas pressure necessary to cycle the action and the excess gases are vented forward through the Quadra vent ports. In practice, this helps to reduce recoil, especially with heavy cartridges and consequently allows the shooter to re acquire the target if missed or move on to the next one more quickly. There is no doubt this is a clever system, and certainly the more powerful or heavy loads I put through the test gun produced very acceptable recoil characteristics.

However, I did find that all the 28-gram loads or lighter with fibre wads did not cycle the action fully and required the empty case to be cleared manually to allow the next one to chamber. This may not seem like a huge problem, but we have to accept that plastic wads are on the way out and within a few years there will probably not be any cartridges of this type available. This could of course just be this particular gun, as in the past I have found the occasional semi that is very cartridge particular. My Benelli M1 is a good example.

Back to the kick inside. Felt recoil is further reduced by the Inflex Technology recoil pad, which spreads the force over the total footprint of the pad in the shoulder evenly and also directs it down from the comb. The combination of these two elements definitely works, as even when firing 3”, 36-gram loads the gun was very manageable and not at all unpleasant.

This twenty bore weighed in at 7¼ lbs, has an overall length of 48¾” and a 14½” length of pull (LOP). The SX4 is supplied with two spacers that will give an additional ½” to the LOP and, as one would expect from a long-standing gun manufacturer such as Winchester, the two longer screws required to fit it are also supplied. The gun came with a 28”, multichoke, chrome-lined barrel, three Invector Plus chokes are supplied ¼, ½ and ¾, all the are rated for both standard and high-performance steel shot loads. Other chokes are available, but FULL is not rated for use with any steel shot.

As is commonly found, the barrel has a vented rib, which is finished off with a Truglo bead that certainly shows up well in low light. The chequering is not the typical diamond cut, but in the form of diagonal lines; I was a little disappointed by it, as the level of grip I favour was not provided and I feel that this would be further reduced when shooting with cold and wet hands.

The SX4 has been designed with greater ergonomics than its predecessor and does indeed fit in the hands and shoulder very well, from the word go! Equally, mounting the gun feels very natural, as does swinging when shooting. This is partly due to the re-shaping, but also with the balance point being moved slightly further forward than in the SX3. The cocking handle, bolt release and safety, located to the rear of the trigger guard, have all been made larger to allow for easier operation when wearing gloves.

The speed loader is a nice touch too; so, even when the bolt is to the rear and the action open, push a cartridge into the magazine and it’s picked up and chambered automatically. Unloading is achieved by working the bolt back and forth. One problem I had when loading was my thumb got partially stuck between the shell lifter plate and the end of the cartridge just pushed into the magazine tube. As the Editor constantly reminds me, I do have larger than average hands, which he finds very frustrating when trying to take pictures of guns and kit, as my big mitts are covering up too much of what he is trying to photograph. However, I cannot be the only one who will find this somewhat frustrating.

The whole gun wears a Shadow Grass Blades camo coating, which is flawless; this, combined with the 3” chamber, steel-proofed Invector plus chokes and larger sized operating handle and buttons all point to a gun with expected wildfowling application.

I find the SX4 20 bore leaves me in a slight quandary, it handles really well and just points so naturally, when shouldered, that it inspires complete confidence that you will hit what you are shooting at. With this particular gun, it cycles the cartridges it likes very quickly and with the increased ergonomics in the design and built in recoil management, is a joy to shoot giving unapparelled target re-acquisition or secondary target acquisition.

All of these, along with the other mentioned improvements made from the SX3 scream out at you to buy one, but then there are the niggles, which admittedly some may be down to me and some to this particular gun. I feel that although the SX4 has not exactly been rushed out on the back of the success that the SX3 enjoyed, perhaps not enough time was taken to produce an overall improved package with this 20 bore.

The price has also risen a not inconsiderable amount, which could be partly due to fluctuations on world currency markets and obviously the cammo job has to be born in mind. All in, I see a great deal of potential in the SX4 20 bore, if the niggles are overcome and the pricing is looked at to see if any reduction could be made.