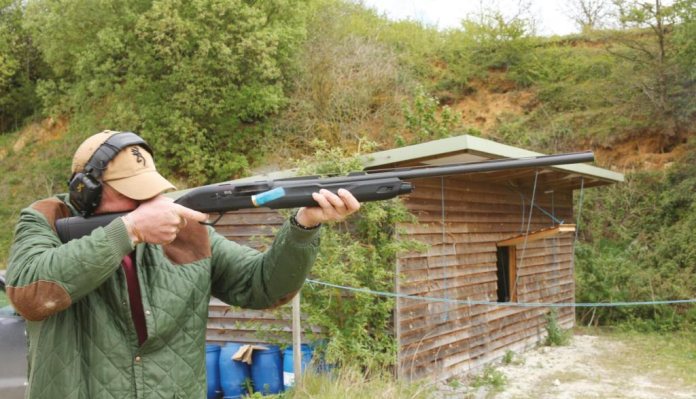 The flow of affordable semi-auto shotguns has, over recent years, seemed never ending and there can be no doubt that some of the older and well established names have lost a proportion of the market. With so many well priced and well made shotguns, especially from the gun makers of Turkey, there can be little wonder at this. Most of the old guard have been pushing back to regain some of this market slice, which Winchester did pretty well with their SX3, they have now upgraded this model, in the form of the SX4.

The model on test was the SX4 - Black Synthetic Stock, but also available are the camo/synthetic Waterfowl Hunter and in walnut the SX4 Field and Field Compact. This last is slightly re-dimensioned for shooters of smaller stature, with no loss of features. As soon as I had put the gun together it felt right in my hands, although with a length of pull at 14 ¼” rather short for me, it comes with a ¼” spacer to increase length, which even I fitted easily in about two minutes, once I had found where my children had hidden my screwdrivers!

With the spacer added, the SX4 came up well but I still had to add a slip-on sleeve to achieve the 15 ¼” I require. With this on, it really did feel like I ought not be able to miss, the comb height is good and several different friends have put the gun to their shoulder, all of whom have very different shaped faces and commentated how good the fit was. The rib is slightly raised with a red fibre bead. The butt and forend have been thoughtfully moulded to provide the shooter with a very comfortable gun fit. Typically, the gun comes with sling points; an integral loop under the butt and a QD swivel in the magazine end cap for Uncle Mike’s-type QD sling swivels.

The forend is also slightly longer than those often found, which only goes to make the SX4 even more usable to those with a wide range of arm lengths. Trigger pull was consistent if a little heavy, the safety is to the rear of the trigger guard and being a little larger than most, should ensure that cold and wet fingers won’t fumble it. The cocking handle on the bolt is also a little larger, I am sure that both these features will appeal to the wildfowling community they have been aimed at.

The mechanism is a gas/piston-type using an active gas valve, which adjusts itself to ensure that the correct pressure is achieved to cycle the action with a large array of cartridge types; and had no problems cycling loads from 24 through to 42 grams. The SX4 is chambered for 3 1/2” cartridges and comes supplied with three Invector chokes ¾, 1/2 and ¼, which are steel-proofed, both of these features will, I am sure, appeal to wild fowlers.

One of the biggest surprises I had was barrel length, it was only when standing it next to a 28” gun that I realised it had a 30” tube on it, certainly the extra weight and length is not at all detrimental to how it handles and shoots. The bore and chamber are chrome-lined and with the Teflon coating on the bolt, combined with synthetic camo furniture, 3 1/2” chamber, steel-proofed chokes and the enlarged safety and bolt handle, you would have to say perfect for wildfowling.

Not usually seen in the UK is the top of the aluminium alloy action is cut for scope mounts, I imagine this is aimed at the continental market for shooting wild boar with slug. Should this be the case, I am fairly confident the shooter would not be unhappy with the results!

Testing was a pleasure, firstly I used the SX4 on one of the drives on a simulated game day, over 100 cartridges in a little under 10 minutes and not a single problem, they were mostly 28 gram loads but some 24 and a couple of 21s were thrown in the mix, not that I could tell when shooting. I also used a mix of plastic and fibre wads, with no discernible difference in how the action functioned, there was a little bit of confetti floating about from the fibres but that is what safety glasses are for!

I have also had some mornings shooting rooks, crows and jackdaws with it, mostly using 32 gram loads and again no problems; I pointed the gun, it went bang and mostly my intended target fell to the ground. I used a few of the much heavier loads on these mornings and yes I could feel the difference in my shoulder but they were by no means unpleasant to fire. Even our esteemed editor shot the SX4 rather well when pigeon shooting with me, in fact he surprised us both with how much his shot to hit ratio improved, the only hard part was convincing him not to fire two or even three shots at everything shootable, especially when he had hit it with his first!

The only fault I could actually find was trying to get the sticker off the barrel, as it did start to smell a bit when clay shooting, as the adhesive seemed to weld it on EVEN harder! All in, this is a really great semi-auto of a quality somewhat beyond its price, with prices starting from a little under £700 and going up to around £750 no one could be disappointed. It’s fair to say that a comparable model from other well known manufacturers would no doubt set you back well over £1000 and in some cases would cost a great deal more.