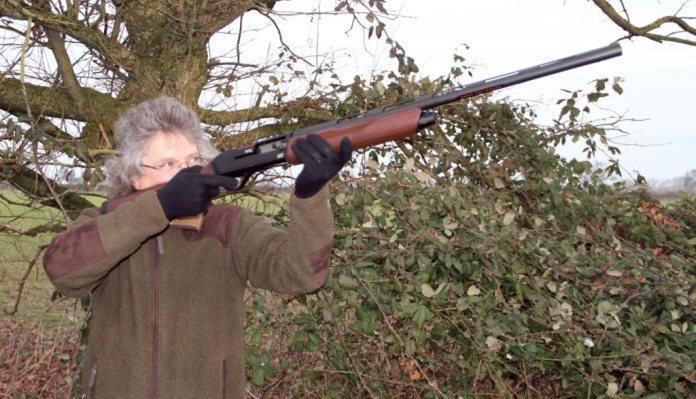 I have always rated the Winchester SX3 as a super-fast, hardwearing and reliable shotgun and was impressed with the patterns thrown when testing loads.

It was fine as it was but Winchester have seen fit to upgrade the SX3 to the new SX4 and it’s quite a performer too. Available in black synthetic or Camo models, I had the walnut stocked version that retails for £725.

It comes with an ultra-fast action design and uses a gas operated system and this is a competitively priced semi that is sure to appeal to a large majority of shooters, for clays and game and take on some of those Turkish imports.

This is certainly a well-designed stock for comfort and reduced recoil felt to the shooter and I had the walnut stocked version, or ‘Field’ model. Purely from a personal point of view, and I will get this out of the way first, to me the walnut was very plain and had a decidedly red tinge to it. Also, the thick satin oiled finish did little to enhance any figure that was there; purely visual I know. I would go for the black synthetic or Camo Mobuc finish instead.

However, with regards fit and function it was top notch. The forend has a good length for a hold at any position, which is handy for hide use, or odd angles off the back of a pick up if lamping!

You have a stepped top ridge half way down, with scalloped finger grooves, so cold or wet hands still have a firm grip. You have a further two panelled chequered area, which are actually ribbed to give a unique hold and look. The underside too is thus ribbed and all in all a comfortable, highly practical forend design. This is mimicked in the rear butt section, with a pistol grip having a near wrap around ribbed panel but no palm swell.

This is actually intentional, to accommodate both right and left-handed shooters. You do have a large black recoil pad that uses Inflex technology that utilises a honey comb central section to the pad that under recoil deflects the cheekpiece away from the cheek. The pad also has a broad foot print and so dissipates recoil more.

Fit around the receiver could be better but overall a very nicely designed stock that certainly aids in a natural pointability and tames recoil well. I think the low comb also helps here but inserting a few stock spacers will help the short length of pull.

These are made in Portugal by Browning Viana and are available in 26- or 28-inch lengths in this model, as here. They have a very nice deep black satin finish to match the receiver and have a 6.5mm slim rib system. This has five vents of equal length, with a slanted profile along the barrel length and with a single red Tru-Glo bead at the muzzle.

You have the really excellent Browning Back Bored technology, with chrome-lined chambers and bore for maximum protection and performance. Back boring allows the shot column to form even patterns that are denser than normal barrels, and judging by the pattern boards, it works.

The SX4 is also proofed for all ammunition types up to 3-inches, so no problems for steel shot.

Multi choked Invector plus are supplied in ¼, ½ and ¾ choke choice and the Invector design ensures less pellet deformation and tighter patterns for a more consistent and dense overall spread of shot. They are flush fitted by the way.

Attached to the barrel is the Active valve system; simply put, it is a re-designed valving system, so that the SX4 must be utterly reliable, ultra-fast, and produce the least recoil possible. This valve is gasoperated and is good for light loads, as it is for the heavy weights, although sub-sonics were a bit of struggle. The valve adjusts to the pressure from each load, to transmit the exact amount of force to the guide rails and operate the action in an instant, no delay, just a perfect smooth operation.

Outwardly, it looks very similar to the SX3 action and I like the look, with the satinsmooth action finish that is hard anodised black on the aluminium receiver. You have twin dovetails for a red dot or scope for buckshot or slugs, which I personally like but I guess few will use but nice to have anyway.

You have a very generous opening to the ejection port that not only ensures a reliable ejection of the spent case but easy access to remove any debris that might find its way in. You also have a redesigned lifter that is nickel Teflon coated to reduce friction and avoid any corrosion. You also have the same coating to the bolt release button below the ejection port, for the same reason and this is also an enlarged and widened, as is the bolt lever with additional grooves, so you have a firm grip on operation.

The bolt has a two-part construction, with a separate head that locks the action and has a large single claw extractor and an internal wall mounted ejection spur.

You will also notice the enlarged and extra thick trigger guard that has a very generous amount of space forward of the trigger blade and inset behind this is the safety catch.

This, as with the bolt release, is enlarged and has a square and profiled finish that you push right to make safe and you can also reverse this, so that lefthanded shooters benefit too, neat. The trigger blade itself is small and smooth and although trigger pull on a shotgun is not critical as on a rifle, this SX4 was very light and positive.

It all adds up to a very wellmade and competent action design that is honed to get the fastest reload possible.

The Grand Prix HV utilises 32-grams of No. 6 shot with a fibre wad, perfect for game fields and high flighting game and really is used as an all-rounder cartridge.

In the SX4 they shot at 30-yards and with the ½ choke fitted a total pellet hit rate of 255 pellets, very well distributed across the 32-inch pattern board. The Inner circle count was good, at 110 pellets, with no holes and dense spacing with 145 evenly spaced pellet hits to the outer sectors.

Gamebore Clear Pigeon is another one of those ‘go to’ loads, as it’s a great all-round performer and has a 30 grams No. 6 shot, 70mm case. I had a total of 204 pellets on target, with 140 pellets in the outer 32-inch board, with 64 covering the 15-inch inner sectors. This was very light recoiling in the SX4 and three fast shots from the mag almost had your eye tracking each shot. You could shoot this all day from a hide over decoys after pigeon.

Lyalvale Express next and another Pigeon Load, this time Pigeon Special, which is a 2½-inch case using the lighter 29-gram No. 6 shot load with plastic wad. It functioned flawlessly in the SX4 and felt like a 28-gauge to shoot.

It had a very good 178 pellet strike on the pattern boards, with 115 pellets around the outer sectors, evenly distributed with very few holes. The inner circle had a good 63 pellet count and again no holes for any game to slip through.

Very hard to fault the new SX4 semi; despite my preference for a synthetic stock version, it is a very capable and almost effortless shotgun to shoot. It almost seems to shoot itself, which may sound a bit odd but it is very smooth and by the time you have thought about another shot, the action is cycled and a new round is ready at your fingertips.