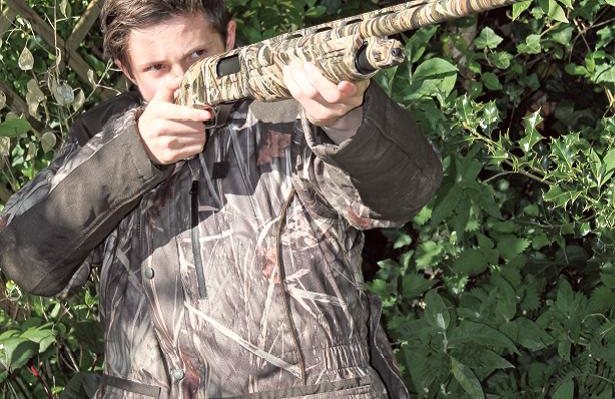 Blimey, another pump action! I do like and use a pump action, primarily for testing reloaded 12 gauge shells and rifled slugs but it is also my preferred duck or goose gun. The Winchester SXP Waterfowl on test here ticks all those boxes. Slick pump action, camo clad exterior and steel or lead shot proofed with a 3.5-inch chambering.

Best of all, it’s all available for around the £400 mark! That’s because this Winchester is made under license in Turkey by Istanbul Silah and I have to say it’s one of the best Turkish made guns I have seen to date and good value too. Although titled as a Waterfowl piece, due to its large 3.5-inch chambering and camo clad exterior, the SXP also doubles as a no-nonsense pigeon decoying or just rough gun, as a few scratches will not matter on this gun.

The SXP has an alloy action that is well-designed and having some great features on a pump action of this price. Slim-line design and camo clad, except the trigger guard, the top of the receiver has twin scope mount slots front and back, so slug use or buckshot with scopes or red dot sights is easy to achieve.

The bolt is a two-piece unit, with a blackened sliding sleeve to the outer section. You have a very good locking system with the SXP. It is both strong and reliable, as it uses a four head locking system to the bolt. This locks and rotates into recesses cut into the short barrel tang that has six slotted abutments, so that the four locking lugs slide in, with the ejector and extractor sliding down each side. The extractor is sited in the right side of the bolt face, only one but it’s quite large and I had no problems with all the ammo tested. The ejector is a blued piece of spring steel in the left side wall of the action and sensibly is screwed in for removal if it becomes damaged or worn. With this rotary system, you have an inertia effect on firing that gives an assist to the pumping operation on firing, thus smoothly delivering a quick pump action. The forend operates the action via twin operating rods that run smoothly and stops binding and twisting.

The barrel is 28 inches long and has a 7mm standard lower profiled rib, with a horizontally serrated top. This is only interrupted by the large red/ orange Day-Glo foresight that is highly visible. You can have a 26- or 30-incher if required, so all bases are covered for a wide range of quarry species.

You also have three flush fit chokes, which are Invector plus and not interchangeable with Invector or std Win chokes. You have Improved, Improved Modified and Full, with steel shot only being able to be shot up to the optional ¾ choke, otherwise blown patterns result and a half choke with steel actually acts like a full choke anyway.

The trigger is heavy at 7.5lbs, which is par for the course but its single stage pull negates any thought of this and the extra space in front of the slim smooth trigger blade allows a good space for a gloved hand. The safety is your traditional cross bolt type that push left to right for a trigger sear block, simple but it works, as does the bolt release that is a rounded, blued button behind the trigger guard. The other blued part is the long loading port slide that has a recessed groove to further accommodate the large 3.5 inch shells if necessary.

The SXP has a good weight to it, it’s not heavy but unlike many synthetic stocks this is to its advantage, as it balances the SXP well, not too muzzle heavy and on firing you have little if any flexing of the stock and no resonance of noise either. I like the profiling or cut away styling that is more subtle with the camo clad finish. It adds interest and the stippled pistol grip areas are in keeping with practical gun like this.

This is not a ‘soft touch’ gun, the Mossy Oak camo cladding has a good tactility and also is quite thick, so even more resistant to knocks. If you had a shotgun ‘dipped’ it would cost upwards of £175, so this makes the SXP even more of a bargain.

The very soft recoil pad really grips, handy when out fowling in the Scottish weather and does help with the felt recoil from those magnum rounds. The forend is a good size and has the customary finger groove to the top edge for extra grip and has the same cutaway detailing and faux vents too.

Length of pull is 13.75-inches, which is a bit short for me but it’s fine as the low comb and straight design allows the recoil to come straight back into the shoulder, rather than up into your face!

Game Bore Buffalo SG I wanted to see how the SXP performed as a close-range fox gun, where sometimes a pocket with the odd buckshot can come in very handy on a driven shoot. The Game Bore Buffalo load is clear walled case to see the payload in side and has the customary high brass head. Loaded as a 70mm length, you have a fibre wad construction with nine SG sized balls inside totalling 32-grams. There is a carded closure and with a full choke (bit tight for SG) we had all nine pellets on target, with a slight high spread of 15- by 16-inches. At least four or five of those big pellets would knock over Charlie.

This is the high velocity (HV) version and uses a large 32-grams of No 6 shot with a fibre wadding that is ideal, not only for game shooting, but also for pigeon, crow and rough game shooting, a good all-rounder. This load actually had the best distribution across the whole pattern board, with no gaps for game to slip through and had a total of 280 No 6 shot in 30-inches, with 153 within the outer circumference and 127 within the inner portion. Great load for most applications.

I needed to try a big load to check out the SXP`s 3.5-inch chambering and so some Remington Premier High Velocity Magnum loads were shot. These are copper-plated, buffered Turkey loads really for Yanks that sit and wait for the old gobblers to walk into range and insist on maximum velocity, tight patterns and heavy loads. Well, this Remmy load has all, 1300fps velocity with a 2oz payload, that’s 56.7-grams of No 5-shot size all in a 3.5- inch length, yikes! This load did not disappoint on the pattern boards, with a total of 273 pellets hitting the board, with good coverage and even density with 167 No 5 shot hitting the outer sections and a good 106 in the inner 15-inch ring. Yes, you notice the extra recoil but in reality still very manageable considering the performance.

This a very fine and good pigeon load that doubles for all-round rough shooting or game needs, as it always produces good even and dense patterns with mild manners to boot.

We had a load of 30-grams of No 6 shot in the 70mm casing and in the SXP they were a pussy cat to shoot with light recoil and fast to pump another round in and get a second shot on track. A total of 289 pellets on the boards, which resembled a swarm of Bees. Very even spread, as expected, with 143 pellets to the outer 30 inch and 146 pellets in the inner 15-inch circle. Can’t improve on that!

Although ‘billed’ as a Duck gun, and having the lure of a 3.5-inch chamber, the SXP is just at home over crops after pigeons and routing through hedgerows after game with medium payload ammunition.

A great value for money pump action that if you dismiss the snobbery of owning a double barrel will last its owner and give years of service for all types of shotgunning needs.

Thanks to Norman Clark Gunsmiths for supply the pattern boards and Remmy load.