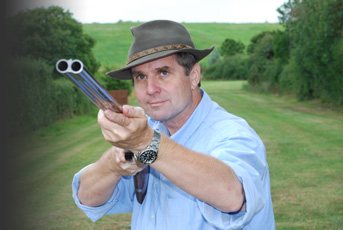 This test concerns an unusual and interesting gun, one of AyA’s finest 20 bore guns with 28” barrels and extra finish. It is AyA’s most upmarket model known in Spain as the “No.4 Deluxe” and is what used to be called a ‘best quality boxlock’ in these isles - something of a rarity these days. Best quality boxlocks are still made by a few firms including AyA and Westley Richards (and the test gun is in essence a copy of a Westley without the idiosyncratic toplever of the famous Birmingham firm). It might also be said that it is the boxlock equivalent of the AyA Nº 1 sidelock. In fact in the UK, this test gun is actually known as the AyA Best Quality Boxlock.

AyA - Aguirre y Aranzabal – are the best known Spanish gunmaker in Britain. Based at Eibar in the Basque region of Spain, they have been making sporting shotguns for almost 100 years (since 1917 to be precise). The company is not as large as it once was, having been subjected to reorganisation, but, at least, they survived which is more than many Spanish gunmakers have done. Although AyA still make some some plainish boxlocks, for example, the No.4/53, the firm’s tends to concentrate now on higher grade guns. They used to have a much wider range, from the budget priced ‘Yeoman’ non-ejector to copies of Purdey’s as well as a Merkel style, cross-bolt, over and under. AyAs famous No. 1 and No. 2 sidelocks remain, as well as the No.4 boxlock in various forms. The former are, in essence copies of the Holland & Holland side lock. Their boxlocks are copies of the Westley Richards Anson and Deeley.

First impressions of the test gun were very good. It is fully engraved by hand (not to be taken for granted today) with fairly tight scroll. The action is silver polished and scalloped to the rear where it meets the well figured walnut stock. The stock wis traditionally oil finished, finely hand-chequered, and has a gold oval for the owners initials. There are double triggers, disc set strikers – as on all AyA side by sides – and a classic concave ‘game’ rib. The proportions are pleasing and the gun weighs only 6lbs even with its longish 15” stock.

This little gun handles well too. There is some weight between the hands – albeit not as much as in a sidelock – and the muzzles are not noticeably heavy. It has, in other words the characteristics of an English game gun. Clearly some extra effort has gone into balancing as well as finish. As I have noted before, a well balanced gun, will often feel lighter than it really is. This is a light gun anyway, so it feels very lively without being too much of a wand. It would be ideal for partridges, walking up, or, if you wanted to spoil yourself, for use in a pigeon hide. It might be an ideal gun for a woman too (though the stock comb might need a bit more height).

It has fixed choke barrels, choked ¼ and ½ . Chambers are for 2 ¾” (70mm) cartridges and the gun has been proofed in Spain at 1370 BAR. The bores are both marked at 15.8mm for diameter for a modern 20, though my preference would be 16mm.  The chopper lump barrels of our AyA are well put together and are competently blacked. Forcing cones are a bit short, as they tend to be on most Continental side by sides. The sighting rib (as mentioned previously) is concave, though AyA offer other options at additional cost; I would love to see this gun with 30” barrels and a narrowish, flat-top, pigeon style rib – Arietta make a gun of this type in 20 bore and it shoots very well.

The action is classic Anson and Deeley made from a forging and with disc set strikers as noted. I am told that AyA will soon be making actions from machined billet; they have just invested substantially in new machinery. The hinge pin is replaceable, which is a good thing although it may not need to be changed in the first owners life-time unless he has a penchant for using magnum loads (which can bring light guns ‘off the face’). There are double triggers, and the front one is articulated as one expects in a better quality gun. All the gunmaking is good, but, I thought the shapes of the triggers could be improved. I have noted this on other AyAs and also on some other Spanish guns. One feature of a good quality English gun are the very elegant, slim and gracefully curved, triggers.

The stock is of the AyA deluxe classic English straight-hand pattern and well grained. It is quite slim – more refined than the Spanish norm. The grip and comb are well formed and the inletting for scallops has been very well done. The length of pull is 15” with 1/8” extra at heel and 3/8” at toe. Sometimes, continental makers forget to add a little extra at heel, and it makes the gun feel less secure in the shoulder, and may make it prone to slipping in recoil. Drop dimensions are 1 ½ and 2 1/8,” by ideal shelf measurement would be1 ½” and 2.” Again, one sometimes notes a reluctance by makers abroad to bring the comb up – I have seen far more guns with stocks that are too low and stocks which are too high.

I generally favour longer and heavier 20 bores, but this one is excellent of its type. It looks most attractive, more importantly, it shoots nicely. The gun feels refined and requires a minimum of effort to mount and swing. I adopt a slightly different technique with light guns, I think the use of the front hand becomes even more crucial for good results. Suffice to say that I did not miss much with this gun when I shot it at driven birds at the West London Shooting Grounds.

This gun is not cheap, but it is good to see someone still bothering with a good quality chopper lump boxlock. I shot for many happy seasons with a Webley 701 and never felt myself at a disadvantage to those with sidelocks. This Aya Best Quality Boxlock was a beautiful gun in all respects.