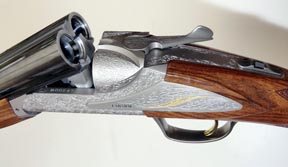 Side-by-sides have technically been the preserve of the English, yes the Europeans do make them but only succeeding because their shotguns are replicas of our own designs. Whilst the rest remain slavish to what they perceive to be an English gun, Fabarm have produced the Nobile III that embodies the company’s own unique style and interpretation.

When it comes to standing apart from the rest you have to hand it to Fabarm, the Nobile III is worth buying for the travelling case alone. Presented in one of the company’s luxury Esthete attaché style cases, this is just the beginning. Starting from what Fabarm describe as a blank sheet of paper, the entire gun exudes an air of art deco elegance, the designer’s flair having been allowed full freedom.

Like their other game guns, the Nobile III has taken the fullest advantage of Fabarm’s select walnut. Bringing out the very best of the straight grain whilst elegantly contrasting with the matte surface of the action, the oil finish straight hand butt and the splinter forend are attractive and comfortably chequered. The well contoured grip flares rather noticeably into a near square section around the head to accommodate the narrow, sharp profile sideplates.

The titanium-finished action shows a lace-like pattern, the teardrop shaped fences with small gold inlays picking out two strands of each sideplate, the shape of which echo Fabarm’s signature motifs. As durable as it is singularly distinctive, the only other splash of colour is in the gold plated trigger that’s protected by the now familiar modernistic trigger guard.

But whilst the onlooker immerses themselves in the Nobile’s visuals, it’s what you can’t see that gives the gun its undisputed strength. Starting at the extended flare muzzles that accommodate any two of the full set of flush-fit, 80mm, Tri-Bore, HP multi-chokes. These proven tubes mating to Fabarm’s tried and tested triple internal bore diameter barrel system.

Removing the forend permits the user to decide whether they want full eject or extractor-only functions. The options are turned on or off and it’s as simple as that! Further along, and anchoring the superbly struck blacked barrels and 2½” chambers to the action, are Fabarm’s familiar side-by-side double lumps. Instead of the usual pair, there are four. This ensures one of the most secure lock ups of any gun of its type, whilst virtually eliminating any form of possible lateral movement.

The one interesting aspect of the action’s profile and its fitment to the stock is that Fabarm have been able to create the look of a semi-round actioned shotgun. Noticeably curvaceous, the Nobile offers a style you’d normally have to part with considerably more money to own whilst providing proof positive that many other designs may well be due an update.

By chance Withet SG’s monthly competition combining sporting and skeet proved the ideal outing for the Nobile within a day or so of its arrival. I’ll admit from the start that initial impressions weren’t auspicious. Given the design is new, Fabarm have elected to build the Nobile with slightly old fashioned shooting characteristics, the ‘blot out’ the target style reminiscent of the days of yore.

Choked ½ an ¼ and loaded with Express Special 20’s, where the Nobile excelled itself was in its demonstration of being a fast handling, walked up gun. Weighing in at just 5lbs 4oz with average trigger poundage of 5.9, where this featherweight won out was in speed combined with almost zero recoil. Now whilst it isn’t the most fluid of shotguns to use, once you’re fully acquainted with how it works, you’ll easily pick off any fast bounding bunny or exploding pheasant.

Where users of the Nobile will initially labour is in the fact that unlike most side-by-sides, Fabarm haven’t built in the usual lead, as most game guns, especially those designed for driven, place their pattern slightly high to aim. Therefore, instead of the anticipated couple of feet lead most shotguns add to the shooter’s perceived allowance on a driven bird, the Nobile requires you to perform the act. Once you’ve worked this out and adjusted your sight picture along the concaved 4 - 7mm rib, the 28” barrels will find their target.

Given the Nobile’s overall dimensions of a drop at comb and heel of 1 9/16” and 2½” and a length of pull of 14 3/8” combined with a straight stock, I personally would always regard this model as a singularly distinctive rough shooting companion. With the ejectors turned off, a faithful retriever and just a handful of cartridges, given the Nobile’s construction allied to Fabarm’s reputation, you’ll have a sub-gauge shotgun that’ll provide generations of faithful, unerring service.

The sideplate model seen here carries a suggested retail price of £2,696 although the more basic boxlock version can be had for £658 less, a considerable saving if decorative detailing isn’t a priority. However, if the Nobile III personifies just one aspect it’s to reinforce Fabarm’s almost unique take on every facet of gun design whatever it may be.