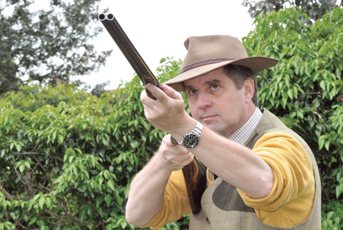 Sometimes in life one has the chance to indulge oneself. The little Fausti 28 bore presented here (which also has a set of .410 barrels - indeed, it began as a .410) represents the realisation of a dream for me. It is not the sort of gun you will find if you went to the local gunshop. It is the product of a bespoke workshop in Northern Italy that also makes mass produced guns in some number under the same roof (the Fausti factory production is around 8,000 units a year, a fraction of Beretta’s but enough to make them a significant player).

Fausti’s ‘boutique’ service has the capability to make guns just the way you want. I saw the .410 on a visit to them, and noted the beauty of its form and the potential, the only problem is that I am not a great .410 fan (save for vermin work). But, a close inspection of this undoubtedly elegant and wonderfully finished little gun revealed it had been built on a 28 gauge frame. My mind started ticking…

I asked the inimitable Fausti sisters to make another set of barrels - rather unusual ones, not just 28 bore, but 30”, equipped with a flat rib, and a stock with a beaver-tail forend. It is no secret that I like longer barrels in a small bore to enhance control, ditto the beaver-tail forends . As for the flat rib, in delicate, well-tapered form, I think it is THE rib for a side by side (especially if one ever intends to shoot clays with the gun). Now, mad as you may think this idea, I had conceived of this sub 5 ½ pound gun as a clay buster as much as a game getter - something to take out just for fun. My contention, moreover, has always been that light guns do not have to be uncontrollable, nor, do they need to recoil excessively if well thought out. I am not saying this is a gun to win competitions with - although it would certainly hold its own in a small bore side by side event - it’s primary purpose, as noted, is fun.

OK, let’s consider the rest of the specification. This is a single trigger gun with a straight, English style grip of oval form. Chokes are fixed (and tight - always my preference in a small bore). The barrels are monobloc but hand crafted with Fausti name inlaid in gold. They are proofed in Gardonne with 70mm chambers (there is no 76mm 28bore yet).

The joint between monobloc and tubes is first class as is the jointing of the barrels to the very elegant and exquisitely engraved and subtly gold inlaid action. You would be hard pressed to find a prettier looking gun. The quality of finish is outstanding in all department, as is the basic engineering and gun-making. The gun is built around a lightly modified Anson and Deeley action with sideplates. In this case, they not only put a bit of extra weight between the hands (never a bad thing - especially in a small bore), they also create a canvas so that the engraver can display his incredible skill. The tight scrollwork is absolutely wonderful here - a joy to behold. OTT? No, it really is, have a look at the pics.

On the technical front, I watched the birth of this gun some years back, it was the focus of very considerable enthusiasm from the feisty Fausti sisters. Their company has always made a significant number of side by sides - probably as many or more than any other Italian maker, but the 28 bore action was an entirely new project requiring redesign and special tooling. It was a gun into which the sisters put a great deal of enthusiasm too - they absolutely loved this gun and grinned every time they spoke of it!

I love that sort of passion - and many people in the gun trade still have it. The test Fausti has conventional Purdey lumps and, a very useful feature in a 28, a non-selective, single mechanically activated trigger (not the more commonplace inertia system). The safety is non-selective. You would be hard pressed to conceive of a more elegant action. There is Southgate style ejector work in each of the two front button fastened forends.

The gripping surfaces of the gun and the comb were all especially good. The forend is of subtle (and super) beavertail pattern not unlike some Purdey’s. The grip is oval in form. The stock shapes are typical of the Fausti house and very good - not something I say often. The gun had very little cast. The wood was quite light, and expertly finished.

The stock is made from good quality walnut with good figure (in fairness to Fausti, they wanted to restock it with something really spectacular, but I said “No, this is quite good enough for me - I like the way it feels and looks now”). The straight grip is thin but good, much the same may be said of the svelte comb. The forend is of subtle and superb beavertail design as noted (and not unlike the form seen in some very upmarket London guns). The grip is oval in form as noted and not too thin or thick.

The shapes of the stock are distinct and conform to the Fausti house - they are subtly different to English ones - but efficient and aesthetically attractive. The gun, made originally as a display piece, has minimal cast, an LOP around 14 3/4”. Wood to metal fit is near perfect. The wood itself is quite light in colour and impeccably oiled and chequered. There is a thin red rubber recoil pad which I may one day exchange for a Silver’s which is more concave to the rear.

The gun shoots extraordinarily well for its weight of 5lbs 3oz. It is pointable and controllable. Like all small bores, especially light ones, it must be ‘driven’ - quick to start, quick to stop. Of its type it is really, really, good. I have never shot better, in fact. This is a fantasy that you could indulge, and not at a lottery winner’s price. It’s not cheap - quality never is - but the basic model starts from about 5,000 euros, and a gun like this with a single set of barrels would be 10,000 euros plus. The good news is the euro is falling!

My thanks to Lyalvale for supplying the cartridges used in this test.