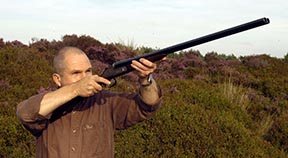 If it’s a classic side-by-side you’re after along with a decent slice of shotgunning history at a price that won’t break the bank, head north to Bond & Bywater’s in Preston and buy yourself the second-hand Gunmark Royale currently adorning their racks for the princely sum of £1,200. Not only will you get yourself a truly elegant game gun but one with a distinctly interesting heritage (but phone first to make sure the gun is still there!)

Originally built back in 1975, the Gunmark Royales were a range of Spanish built shotguns manufactured as the name would suggest on behalf of Gunmark – a company now better known as GMK. These shotguns were built to a very specific high quality English style and based on the Anson & Deeley sidelock action. Nothing especially unusual or new in this arrangement; numerous companies apply their name to a range of shotguns or rifles, the end result usually a high quality gun that can be offered at a slightly reduced cost given that its not theoretically a prestige name.

Produced by two well known manufacturers, the name Royale was chosen to differentiate between their shotguns and the Royal as offered by one of London’s premier gunmakers, it was considered that the addition of the letter ‘e’ sufficient to ensure potential customers could determine the difference. Another major factor was that the original Royales retailed out for around the £1,000 mark whilst you could easily add at least another nought for the similarly named London best.

However, history as we known doesn’t always run smoothly and without going into great detail, the time eventually came when the ‘e’ was insufficient and the Gunmark Royale ceased production… albeit in name only. The good news is that occasionally a single or a matched pair of these guns hits the market just as this 12-bore did a few weeks ago.

More or less identical in looks, it was both the Arrieta and Garbi companies who produced these sideplate shotguns originally, with colour case hardened actions and both with engraving designed by the Giovanelli Studio who produced the plates. Although the actions eventually changed from case hardened to the more familiar brightwork, the game scenes continued, the gun you see here with flighting ducks on the left sideplate of the action, woodcock on the right and partridges on the base.

In most respects the actual manufacturer of each Gunmark Royale is relatively immaterial, given that these shotguns were built to a predetermined pattern. However, if you favour one over the other, all you need to do is take a quick look at the barrel flats. If the letters AR precede the serial number it’s an Arrieta, GA if its one of Garbi’s, as per the Royale you see here.

Starting from the small brass bead that sits atop the ½ and ¼ chokes muzzles, the 28” barrels are well blued and in virtually new condition, the words Gunmark Royale in gold discreetly set into the concaved rib just forward of the external chamber and forcing cone taper. Apart from the heavy scroll engraved fences and game scenes, the sideplates, action floor, face and black top lever are once again as new, no hint of heavy usage or that the removable strikers have actually been extracted.

The well figured woodwork is undamaged, the semi-oiled finish still in excellent condition as is the chequering on the forend, grip and heel of the stock. Equally the small escutcheon still awaits the initials of its next owner, the previous holder electing not to personalise this particular 12-bore.

Anyone whose sport takes them after driven or walked-up game will immediately feel a familiarity with the Royale. Fast handling combined with the pointability that all side-by-sides of this ilk embody. A comfortably chequered straight stock and forend allow the user to switch rapidly between targets, whilst sliding the hand quickly down the grip for the finger to acquire the second trigger.

Shot over two round of Sporting, the first noticeable aspect of the Royale was that although this shotgun is chambered for most 2¾” rounds, those such as the hard hitting Express Super Game certainly make their presence felt. Although the Royale more than handled these potent loads, eradicating some fast flying targets in the process, it was a change to the Express Paper Case Game cartridges that showed the Royale off to its best.

Combined with these more traditional game loads, the Royale was a genuine pleasure to shoot. The gun’s ability on sporting style clays gives an indication of its competence as a lightweight, all-round game gun, this shotgun’s true purpose in life. When you combine this aptitude with the gun’s traditional looks, the sidelock action, drop points, detailed engraving and feel, it comes as a surprise that the previous owner actually wanted to part company with it in the first place.

If any slight criticism could be commented on - and its more down to my fingers than anything else - its that when pulling the second or rear trigger, the recoil, although virtually absent from my shoulder with the Paper Case Game loads, still forced the first or forward trigger back into my finger. In all probability this small inconvenience would be overcome by seeking out the services of a suitably qualified gunsmith or by wearing shooting gloves. Whatever the cure, this certainly wouldn’t deter me from buying the Royale.

If your wallet allows and you’re unable to source a second-hand example, its still more than possible to acquire an Arrieta that is more or less identical to the Royale, as GMK still import these beautifully built side-by-side shotguns. Called the Viscount and the Crown, the first is scroll engraved in traditional English style whilst the latter is a superbly proportioned round actioned gun.

Timeless in looks and handling, this Garbi built Royale is available at a price that should see it quickly settled into its next owner’s gun cabinet. If not this particular example then any other Gunmark Royale should immediately become the focus of serious attention for any lover of classically proportioned shotguns, that will readily hold their own on the grouse moor of pheasant drive. All in at £1,200 this Royale’s a gift, given the gun’s quality and overall condition.