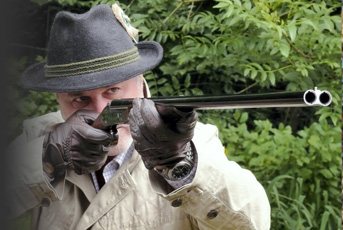 Can I say from the off that unlike the 12-bore I tested previously, the appearance of the 200AC 28-bore immediately put me at my ease. Dark, slim and elegant with a nice action and not the slightest hint of external chrome, Edgar Bros just might get round to selling some of these diminutive side-by-sides.

Available in a selection of gauges and stock styles, the 200AC as tested benefits from a rather attractive, colour case-hardened, sideplate, boxlock action, built in the true traditions of a quality, no frills double gun. The blue/gold finish extending around the base, top and bottom tangs, top lever, trigger guard and even the blade itself. Add to this some of the best struck and truly elegantly blacked 28”, flush-fit, multi-choked barrels and well figured walnut and you have a particularly attractive package. The only sign of any form of highlight is Huglu’s trademark double-headed eagle logo that sits on the top lever spindle, this adding a touch of refinement.

An area of special interest is the treatment around the fences. A singularly square section of this type of boxlock action, Huglu have added a touch of flair by notching out two small scallops just above the face of the action whilst simple yet tasteful engraving has been applied, subtly complimenting the minimalist scroll work of the main metal surfaces.

Looking slightly closer the barrels themselves flare ever so slightly for about the last three inches in order to accommodate the choke tubes, with a set of five included. Capped off with a well sized, brass bead, a 6-9mm tapering raised yet slightly concaved rib runs the length of the tube. Its faint, scroll-cut surface an efficient method of eliminating heat shimmer that prolonged usage will generate. Don’t let the delicacy of the barrels fool you though, with 2½” chambers along with the action’s side clips, the 200AC is well equipped to deal with the serious pressures that top 28-gauge loads generate.

For whatever reason, Huglu have in their mind that a semi-matte lacquer finish is the way to go when it comes to presenting their walnut. Nicely figured and certainly not a bad job for machine-cut chequering, an oil-finish would doubtless have made more of the timber. Well proportioned and with a soft rubber recoil pad with hard heel insert completing the butt, the semi pistol grip is well contoured and radiused with the merest hint of a palm swell but with well defined cast. Likewise, a beaver, Schnable forend with a defined lip widens to encapsulate the sides of the barrels offering suitable hand protection from the inevitably warm tubes.

With the decent 28-gauge loads now available you’ve no need to think you’re under gunned with the 200AC, your only requirement being tighter chokes. Fitted with ½ and ¾ and loaded up with Express 28-gauge filled with 6’s the guns ability to comprehensively despatch long distance targets was beyond question. Be it clays, crows or squirrels, the resultant kills were clean and impressive, aided in no small way by the gun’s full size dimensions.

One aspect you’ve to be careful of with many of the smaller gauges is that the manufacturers tend to miniaturise every part of the gun to almost toy-like measurements. Not so Huglu, the 200AC offering a balanced weight of 6lbs 2oz, a well sized sporter stock with a drop at comb and heel of 1 3/8th and 1 7/8th with a more than decent length of pull measuring 14¾”. The combination of which should suit all but the most diminutive of shooters. Balancing a fraction in front of the hinges, the only aspect of the handling you’ve to be aware of is that it’ll be on or past your target before your eyes have locked on.

But when carried ready and waiting for the bird or bunny that you know is lurking somewhere in the hedgerow, Huglu’s little 200AC 28 – bore will be up and on in a fraction of a second. Be it driven or walked – up, there’s hardly anything this little shotgun shouldn’t be capable of, every aspect of the 200AC’s dynamics displaying a noticeably degree of refinement.

At both clays for which it wasn’t intended and an evening’s crow poking Huglu’s 200AC proved itself to be one of the most enjoyable shotguns I’ve used for many a month. Lightweight, fast handling, placing its shot exactly where required and absolutely no recoil, what more could you ask? There are sadly three points that detract from what otherwise is a truly entertaining sub-gauge. At £1,400 it’s around £300 too much given the creepy, 6lbs 4oz pull of the triggers and the fact it’s a non-ejector.

I wear shooting gloves all year round whilst other tend only use them in winter. Whatever your preference, try extracting empty 28-bore cases with them on especially if things get hectic. However, as a boundary weapon or for an evening’s pot shot provider, you’ll go a long way to find a lightweight snap shooter more companionable than Huglu’s 200AC without spending considerably more.

From 6 to 66, everyone will enjoy this shotgun
Looks like a sub-gauge game gun should do
Needs ejectors if its to truly appeal