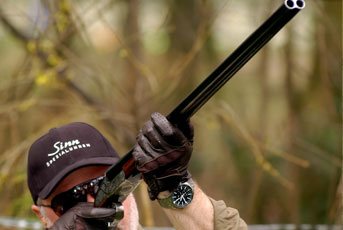 First Of Its Type

Since my visit to Merkel just short of two years ago, it was obvious the Suhl based manufacturer was determined to win back their once lucrative UK market. Problem was it’s only the older shooters who remembered the name, and their current shotguns just don’t appeal. Similarly, a large part of the buying process is done with the eyes and telling ‘Joe Public’ that what he’s paying for he can’t see doesn’t exactly float his boat. Let’s face it, who wants to walk round with an expensive shotgun that’s visually quite plain.

Enter the ’50 British’ or in this instance the prototype version, a side-by-side that’s been jointly conceived by both Merkel and UK importers, Viking Arms. Initially available only as a 20 bore although a 12 is to be had on request, Merkel have finally realised that if they’re to produce a shotgun we Brits want to buy they have to ask us what we actually want - not what they think we want.

With a retail price of around £10,500 inclusive of a fitted case, the production 50 British will represent decent value for money especially when compared to an English built gun or the various Spanish equivalents, all of which cost at least double that of the 50. Similarly, if its looks you’re after, this little Merkel has them by the bucket full. Fitted with a minimum of grade 7 walnut, the straight handed sporter stock and splinter forend embody the traditional German values of sturdy, straight graining but with the addition of a luxury finish, fine hand cut chequering and the superb levels of fit expected from an English shotgun. Where the prototype differs is in the stock’s short grip and the lack of drop – points that represent changes that will be made along with alterations to the stock-head profiling where it mates to the plates of the sidelock action, all of them aspects that will be corrected once the 50 is in production.

Where Merkel have truly anglicised the 50 British is in their adoption of an Anson style two-pin sidelock action with a detachable bottom plate with not the slightest hint of their hallmark Greener cross-bolt locking system. The strikers are disc set with the addition of vents let in just below them, the entire action first-class in both execution and presentation. Decoration is of a profuse floral type with scroll and fine boarder work that extends around the fences, trigger-guard, top and extended bottom tangs, top-lever, the elongated diamond shaped forend inlay and irons, only the fine hatching of the diminutive auto safety and forend’s Anson pushrod release infinitesimally interrupting the artistic flow.

Locking onto the action are the chopper lump barrels that exhibit one of the most elegant profiles I’ve seen in years, both tubes tapering effortlessly down from their 2¾” chambers down to the ½ and Full chokes muzzles and small brass bead, these restriction being eased to ¼ and ½ for the production model. Renowned masters of barrel-making, the barrels are superbly struck and enjoy a semi-matte blacking that’s both attractive and resilient whilst the raised 7-10mm tapering, gently concaved rib enhances both the overall looks whilst adding to the 50’s driven bird specific dynamics.

Even though the stock dimensions will be significantly different to those of this prototype gun its still worth itemising the ones Merkel though we should have. Drops and comb and heel were 1 5/16” and 1 7/8” although the length of pull to the front trigger was for me a very comfortable 14 ½”. Pull weights were 5lbs for the front trigger with a slightly heavier 7½” for the rear, both weights something I hope will be lightened up. That said, the crispness, response and break is the equal of any single- triggered shotgun, each blade’s position and reaction going some little way towards negating the prototype’s cramped grip.

Heading down to Rishton with two different types of ammo, the 50 was a gun I was particularly keen to try even though the dimensions meant it was going to shoot especially high for me. Mis-mounting to eliminate some of the physical imbalance, whilst crossing birds proved noticeably tricky, it was on driven and going away clays that the 50 came alive, both targets being of the type the 50 has been especially designed for.

Irrespective of whether it was 25g of Express Special 20 6’s, 32g of Eley VIP or Gamebore’s Pure Gold game load, the new Merkel’s vaporising abilities immediately came to the fore. Deft, superbly balanced and adding just the right amount of lead, the 30” barrels gave the gun that all important ‘pick ‘em off’ feel only a top – flight shotgun seems to possess. With the point of balance just forward of the hinges, the 50’s overall weight of 6lbs 4oz is just sufficient to add that all important smoothness of momentum to the swing.

All I had to beware of was the fact that my nose was directly over my thumb and irrespective of how much I wrapped myself around the 50, the high mount allowed the comb to brush my cheekbone. But ‘head-up’ on the driven birds and we were in business, although this isn’t a style I or any instructor would advocate. Where the 50 also won out was on the amount of attention it received along with the gun’s looks. Interestingly, everyone who looked at it was convinced it was English only those who studied the engraving along the left barrel suddenly realising that the 50 is German, which means even in prototype form Merkel and Viking have succeeded.

It’ll Be Alright… I Guarantee

By the time you read this review the alterations will already have been implemented Stock dimensions will have been altered, the hand or grip will have been lengthened along with the removal of the front of the comb’s angular snout, the woodwork around the sidelocks reprofiled along with the addition of drop points. Likewise, fit and finish will be exactly as it should be, all prototypes invariably suffering from less than perfect presentation.

Sticking my neck out, I’ll guarantee the production versions of this shotgun will be right. Similarly, if you want your own gun to be slightly different, be it measurements, engraving or whatever, Merkel’s speedy custom services will be readily available.

Whilst this prototype was at times awkward to shoot, it was still a pleasure to use, everything about this pre-production shotgun hinting at just how well the finished example will shoot and handle. Would I have one? In an instant, all I need is to find ten and half grand that’s going spare!