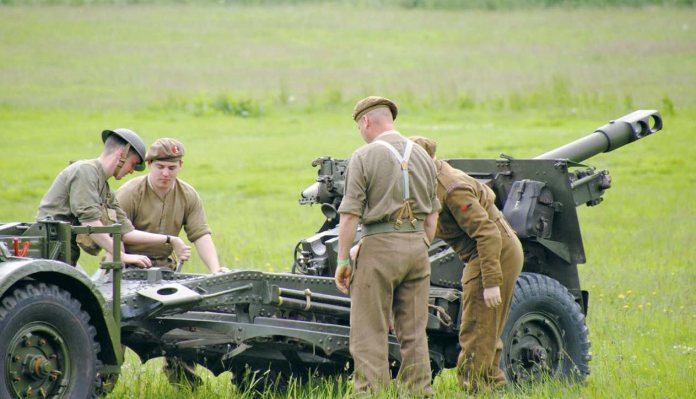 When the British Expeditionary Force (BEF) deployed to France on the outbreak of war in 1939, the Royal Artillery units took some 2,000 pieces of all types of weapons, including antiaircraft and anti-tank guns, along with over 700 examples of a new weapon which would become known as the 25-Pounder Field Gun. On the 10th May 1940, the Germans launched their Blitzkrieg against France and the Low Countries where the crews of the 25-Pounder guns found themselves firing them in anger for the first time. However, only a few weeks later, these same guns had either been destroyed in the fighting or were left abandoned on the beaches of the French coast as the BEF withdrew during ‘Operation Dynamo’.

Among the thousands of tons of supplies and weapons left behind, were the surviving versions of the new field gun at the time, known as the Mark I 18/25 Pounder. The design mounted a new barrel firing a 25-Pound shell on the old carriage of the 18-Pounder gun of WWI vintage because they were plentiful. The German army eagerly seized these and pressed them into service, giving them the designation ‘8.76cm FK282(e)’. Later, other marks were also captured and put to use by the German army, including the MkI and MkII, which were designated ‘FK282(e)’ and ‘FK280(e)‘respectively. They were usually delegated to secondary roles.

Throughout the 1930s, the British army began re-arming and although factories were producing new weapons, a sense of urgency was lacking and the process was taking time. After the neardisaster at Dunkirk, the factories improved their production and increased their output to replace the losses, which included a new version of the 25-Pounder. This was the ‘25-Pounder Mk2 on MkI Carriage ’ which would go on to serve throughout the rest of the war, being used in all theatres and by most Commonwealth and Dominion countries, including Canada, Australia, New Zealand and India. Typically, a regiment of 25-Pounder guns comprised some 636 men of all ranks formed into three batteries, each with eight guns and support elements including drivers, signallers and mechanics.

Measuring just under 8ft in length overall, it weighed 1.7 tons. It was capable of firing a 25-pound, 3.45” (87.6mm) calibre high explosive shell at a muzzle velocity of almost 1,750 FPS, out to a maximum range of 13,400 yards (7.6 miles). Designated as a ‘QF’ (quick-firing) gun due to the nature of the ammunition, known as ‘variable-charge’, a crew of six could fire up to eight rounds per minute, but five rounds was the normal rate. As well as serving in the role of a field gun, the 25-Pounder was the gun mounted in the Canadian Sexton self-propelled gun and the Australians trialled it in the home-produced ‘Sentinel’ tank. Lightweight versions were developed for air portability and it was also pressed into the anti-tank role firing specialised ammunition.

With its prominent gun shield and integrated baseplate, which allowed it to be pivoted through 360º without repositioning, it was instantly recognisable to civilians at home. More than 12,000 were produced during the war by factories such as Vickers- Armstrong and Baker Perkins in Britain, plus Sorel Industries in Canada. It continued in service after the war, being used in post-war conflicts, including the Korean War and the Dhofar Rebellion between 1963 and 1976. In fact, it was during this last conflict that Fijianborn Sergeant Talaiasi Labalaba, serving with B Squadron of 22 SAS on the 19th July 1972, who, despite being seriously wounded, continued to single-handedly fire a 25-Pounder gun to defend British positions at Mirbit. Unfortunately, he later died of his wounds.

As a result of the gun’s reputation for reliability, more than 40 countries would take it into service and it would be used in conflicts in the Middle East and Africa, including the Indo- Pakistan War of 1947. The British army continued to use it as a training weapon for artillery until the 1980s, and even today the gun remains in limited service with several countries. Today, many are on display in military museums around the world and even some barracks have an example as a ‘gate guardian’.

The Morris ‘Quad’ was the standard towing vehicle for the 25-Pounder, although it could be towed by other vehicles, and when coupled with the No 27 ammunition trailer, with its capacity of transporting 32 rounds, the combination became a formidable selfcontained artillery system. Apparently, the Germans in North Africa came to recognise this distinctive combination when the guns were deploying into battery formation. Today, it is that same recognition that makes gun firing displays by the 25-Pounder a popular item with the public. Modellers enjoy it for the references and weapon enthusiasts, as well as collectors, also like the demonstration. As for the re-enactors, they enjoy the thrill of the action.

Owning a 25-Pounder field gun is not a problem, providing you can afford the price and have somewhere to store it. A legally deactivated version for a restoration project can be obtained for around £10,000, depending on the condition. The type of version also affects the price, such as whether or not it is fitted with a muzzle brake. The numbers produced means it is fairly easy to obtain an example. Examples of inert ammunition and other ancillary items connected to the gun, including drill manuals and ammunition boxes, can sometimes be found at militaria fairs.

The gun was a versatile weapon as it could be used in roles other than that of a field gun. For example, it could be used as an anti-tank gun (for which specialist ammunition was developed) using the baseplate as a traversing platform. As a field gun, its usual range of elevation was set between -5 and +45º, but by positioning the box trail into a pit, 80º of elevation could be obtained to fire as a howitzer. When mounted into a special turret fitted to a Valentine tank chassis, this produced another self-propelled version for the British army known as the ‘Bishop’. Perhaps only around 100 of these combinations were built and used in action in North Africa as well as Italy. The Australian army also developed a lightweight version, known as a ‘Baby’, for use in jungle fighting, which saw limited service.

It is this versatility that makes the gun such an interesting subject with all military enthusiasts and seen it being the subject of many books and documentaries. Newsreel footage showed it in action to cinema audiences watching the latest news of the war in North Africa. They saw the dramatic artillery fire, which included the 25-Pounder in action at El Alamein, in Italy and later across Europe from 1944. This history makes it an ideal piece of artillery for re-enactors to include in scenarios depicting battle reenactment in these two theatres of war. Sometimes Sexton SPGs are included to demonstrate two versions of the gun.

To see a full unit being towed by a Morris ‘Quad’, complete with No 27 trailer, coming into action is like watching these newsreel films in real life. The groups who perform these displays use the actual drills that would have been taught to the gun crews during the war. They practice until perfect and the result is always spectacular, plus makes for a perfect point of reference. From the moment the driver stops, the deployment shows the skills each member of the crew has learned.

During WWII, the gun proved very popular with the crews and this popularity continues today on forums and websites. Collectors, general enthusiasts and modelling clubs never seem to tire of using it as a theme for dioramas. If you should see details of a re-enactment where you think such a demonstration will be performed, do not miss the chance to see such an iconic weapon in action. The Royal Armouries site of Fort Nelson at Portsdown Hill Road, Fareham, Hampshire, PO17 6AN organises historic gun firing, including the 25-Pounder. Details of these displays can be found at www.royalarmouries.org.