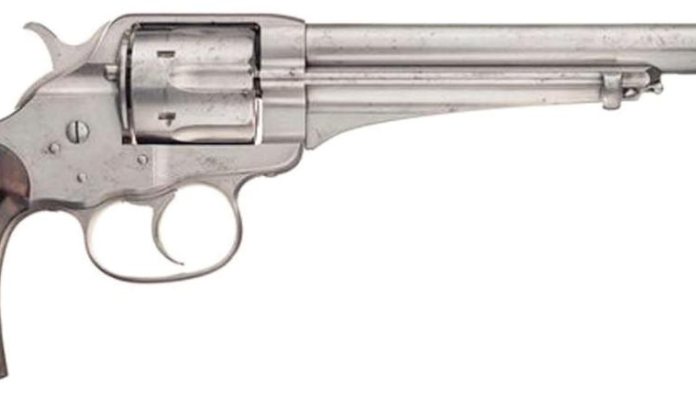 A recent re-acquaintance with a Uberti product caused me to seek some information on the internet and the responses reiterated the story of a supposed agreement between two of the giants of firearms manufacturing in nineteenth century America. The gun in question is Uberti’s recreation of the Colt Model 1883 Burgess lever action rifle, and the gun manufacturers concerned were Colt and Winchester. Both companies have at various times been touted as makers of “The gun that Won the West”, a reference to the Colt Single Action Army revolver and Winchester’s Model 1873 lever action rifle. That debate will continue to run and is not the focus of this article.

Andrew Burgess was born at Lake George, New York, in 1837, not far from the childhood home of celebrated photographer Matthew Brady. By the late 1850s, Andrew’s interest in photography found him employed by Brady at his Washington D.C. studio. Many of the great American Civil War photographs were attributed to Matthew Brady but later investigation revealed that other photographers at the studio, including Burgess, were responsible for at least part of the cache. Among those said to be Burgess’ work is the portrait of Abraham Lincoln, which appears on the American $5 bill.

In October 1871, Andrew Burgess married Eudora Tiffany, the granddaughter of the founder of the jewellery company. By 1874, as Brady’s health began to deteriorate and his finances were suffering, Burgess bought the Washington studio, selling it back a short time later as Brady’s position improved and Burgess concentrated his time on inventing.

Seemingly gaining an interest in firearms while on assignment in Europe, Andrew was granted his first US patent in 1871 for converting single shot Peabody rifles to repeaters, with the addition of a sidemounted magazine. His first patent referring to a lever action rifle was granted in 1872 and thereafter he continued to improve and add to this invention, eventually having his work recognised on rifles manufactured by Whitney, Colt and Marlin.

In 1893, he opened the Burgess Gun Company in Buffalo, New York and manufactured pump-action and folding shotguns. Strangely, he was never tempted to make lever action rifles under his own name, possibly because his successful patents in this area had already been assigned to other manufacturers.

In 1888, Winchester purchased the Whitney Arms Company and along with the building and assets, all of the Burgess patents that had been assigned to Whitney.

It was their way of taking the competition out of the market and eleven years later, in 1899, they acquired the Burgess Gun Company.

Andrew Burgess, his health failing, retired to his winter home in Florida, where he continued working on the improvement to gas operated and machine guns, with his final patent being granted in 1906. He died on December 19, 1908 and is interned in Owego, New York.

When Sam Colt began his firearms business at Paterson, New Jersey in 1836, among his first products were revolving rifles and shotguns. The venture lasted a mere six years, with probably less than 2000 long guns leaving the factory. By 1847, Sam was back in the gun business, this time for good. His next attempt at a long arm was with the 1855 Model side-hammer design, better known as the Roots model. Both rifles and shotguns were produced in much larger quantities, with some versions going to the US Government.

During the Civil War, Colt was contracted to manufacture the Model 1861 musket for the Army, with some 100,000 pieces leaving the Colt factory. After the War, Hartford turned out a number of single shot centre fire rifles, the majority of which went to Russia.

It was not until 1883 that the Colt company again turned its attention to volume manufacture of repeating rifles, when they adopted Andrew Burgess’ patents to make a lever action model in both rifle and carbine configurations. The only calibre offered was .44/40, the 25½-inch barrelled rifle holding 15 cartridges in its tubular magazine, with the 20-inch carbine having a capacity of twelve rounds. Carbines were fitted with a round barrel and rifles had the choice of round, octagon or half-octagon. Extra length barrels were an option at one dollar per inch.

Standard finish was blue barrel, magazine and receiver with the hammer, trigger and lever being case hardened. Case hardened receivers (an option) are rare and today’s collectors will pay a premium for this. The blued steel rifle butt plate was of the same shape as the Winchester and Kennedy rifles, albeit with a slightly longer crescent. Carbines used a flatter plate and all models had a sliding trapdoor over a round slot for cleaning rods. Rifle sights were basic, with a semi-buckhorn style rear and a German silver blade dovetailed into the barrel at the front. The carbine had a sight block soldered on the barrel just behind the front barrel band and the rear was an adjustable military style. Two variations of the lever lock were used intermittently throughout production on both rifles and carbines, the latter also having a saddle ring on the left side of the receiver. Factory standard wood on all models was oiled American walnut, with the option of fancy grades, pistol grip stock (rifle only) and chequering.

The loading gate on the right of the receiver is a sliding configuration, as against the spring gate of the Winchester. In use, this proves to be easier to load.

So, here we have a medium framed repeater, seemingly aimed squarely at the competition in the form of Winchester, Marlin and Whitney. If we are to believe one story, Winchester at least would not take this lying down.

Legend has it that Winchester designed and built a number of revolvers, both single and double action, and allegedly took them to Colt to seek advice on their production, with the intention of showing Colt that they could play them at their own game. The managements of both companies are then said to have sat around a table and agreed not to interfere in each other’s prime source of manufacture, i.e. Colt would not make lever action rifles and Winchester would stay out of the handgun market.

So, was the Colt Burgess entry into the lever gun market the straw that broke the camel’s back? Was the Winchester management afraid that this new rifle and carbine, if successful, would decimate the sales of the Model 1873, with which it seemed in direct competition?

Oliver Winchester had turned the ailing Volcanic Arms Company into the leader in magazine fed lever action rifles by the time their Model 1873 rifle was introduced. An instant hit from the start, the Model 1873 went on to sell well in excess of 700,000 units before it was discontinued in 1919. When the Colt Burgess rifle hit the market, Winchester was still selling its Model 1866 and the more recently introduced Model 1876, so these three models seemed to have all the bases covered as far as this sector of the market was concerned.

The company was not, however, free from problems in 1883, with competition from Whitney and Marlin in the lever action market and Remington nibbling at sales of their large bore 1876 models with the Rolling Block rifles. Whilst sales were generally on the rise, retail prices were steadily falling and it has been suggested that profits remained the same in 1890 as they were in 1880, and were possibly even lower.

Colt, on the other hand, were riding the crest of a wave, with good sales of the six models of revolver they had on the market, as well as a range of double barrel shotguns. In particular, the Single Action Army revolver was the standard issue for the Army and had beaten off all competition in successive trials. What was Winchester bringing to the table to threaten Colt’s handgun market?

The story alludes that their principle submission was a copy of the Colt SAA revolver, made by William Mason, a former Colt employee who had worked on the SAA, and which could supposedly be made cheaper than Colt was charging for its own revolver. With tooling already in place surely Colt was in a position to reduces its prices to match. They also showed a double action revolver with a frame very much like the Colt 1878, but with a barrel and ejector set up stamped with Remington markings.

It is also said that they presented Colt with a revolver with a swing-out cylinder and another couple of single actions with semi-automatic ejector systems. In fact, these later guns had been around since 1876, when Winchester unsuccessfully entered one in the US Navy Ordnance trials of 1876 and also failed to interest the Russians with another. They had displayed a ‘Model Centennial 1876’ at the Philadelphia Centennial Exposition that year. So, Winchester had tried, and failed, to gain a foothold in the handgun market previously.

One wonders why Winchester did not take this approach a couple of years earlier when Marlin introduced their Model 1881 lever action rifle. In essence, it appears that Winchester had little to threaten Colt or any other handgun manufacturer.

Perhaps we should look at probably the principal reason why the Colt Burgess was so short-lived – it was not a good seller. Pitched against the well-established leader in the field, the Winchester Model 1873, the Burgess had shortcomings. With the majority of this type of rifle sold in the West, the Colt’s lack of a dust cover over the action, standard on the 1873, was seen as a major drawback. Winchester themselves had dispensed with the dust cover on the introduction of the Model 1876 but public opinion made for its reinstatement very quickly. Another feature of the Winchester, the trigger pin safety, was not present on the Colt.

Although the Burgess design has smaller receiver than the Winchester model 1873, it is a much stronger action than the togglelink Winchester layout, particularly the bolt, but its quirky firing pin may have been something of a weak point.

The sliding loading gate of the Burgess necessitated a very thin area on the right side of the forearm in which the slide runs. This area was prone to splitting and breaking off, not an ideal situation. For whatever reason, the public did not take to the Colt Burgess and it would not have taken the Colt management long to realise that this was not going to be the success they had hoped for. As late as 1889 they were still being advertised by J.P. Lowell of Boston for sale at $11.00 each against a retail price of $27.00 in 1883.

Finally, there is one more reason why the Colt Burgess was withdrawn. – because of the low sales (only 6,403 examples were produced before its demise in Jan 1885) Colt’s next generation rifle was rushed into production, and in 1884 they introduced their Lightning slide action models. Produced in a variety of calibres from .22 rimfire up to .50/95 Express, they sold over 185,000 units before it was removed from the catalogue in 1904, and for the first six years of production Colt had the slide action rifle market to themselves. Some of the patents on the Lightning incidentally were those of Andrew Burgess.

A gentleman’s agreement? Seems unlikely but makes for a great story nevertheless.

PLEASE NOTE: The Uberti reproduction of this rifle is no longer available from the importer.