An American Legend: The History of Winchester 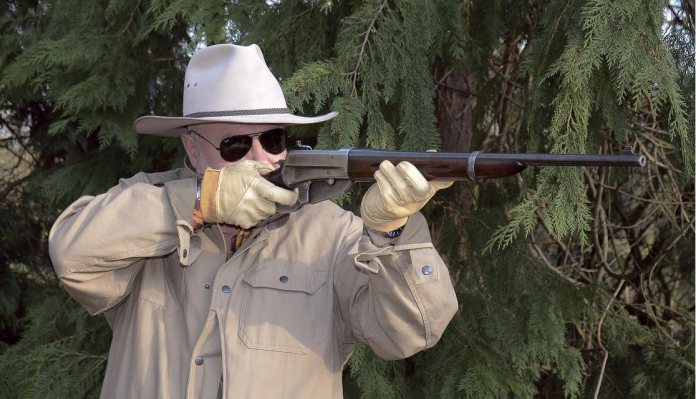 Described by Theodore Roosevelt as “by all odds the best weapon I ever had”, it comes as no surprise that the Winchester name stands shoulder-to-shoulder with the true gun-making elite. 150-years ago, in 1866, one of the greatest names in firearms manufacturing came into being; a name that at times and against the odds, has still managed to maintain its legendary status. Even today, as little more than one of Browning International’s brand names, the guns that made the Winchester name famous still holds sway amongst those who know their history.

A history that’s inexorably intertwined with North America, the full Winchester story is sufficient to fill volumes. So, what you see here is the briefest of overviews, but with luck it will tempt the reader to seek out the whys and wherefores of Winchester’s firearms development and the reason why it was the lever action rifle that was really the gun that won the west, and how Winchester helped forge a nation. Winchesters were also at times referred to as the guns designed by cowboys and built by blacksmiths, given their, at times basic, yet exceptionally functional nature.

Evolving from Walter Hunt’s Volitional Repeating Rifle that fired the famous Rocket Ball, the powder contained within the actual projectile and then the Volcanic Repeating Arms, it was clothing manufacturer Oliver Winchester who was the majority shareholder. The company wasn’t very successful, so in 1856 Oliver and his partner John Davies acquired the ailing firm and reorganised it as the New Haven Arms Company back in 1857. Manufacturers of the famous Henry rifle, the design was eventually reconfigured into the famous .44 Winchester lever action, tubular magazine rifle, first in rimfire then centrefire. The 1876 Centennial following a few years later, all of which were now manufactured by the Winchester Repeating Arms Company of New Haven, Connecticut.

Oliver himself died in 1880, his son and natural successor William Wirt Winchester passing through tuberculosis just four months later, William’s wife, Sarah, then taking the helm. By 1883 Winchester was working in close partnership with John Moses Browning, the collaboration resulting in the Model 1885 Single Shot, the Model 1887 lever-action shotgun, Model 1897 pumpaction shotgun and the Models 1886, 1892, 1894 and 1895 lever-action rifles. Interestingly, certain of these symbolic guns are still in production even today, labelled as Brownings, Rossi and Navy Arms, their enduring popularity ensuring they’ll live on indefinitely.

At the start of the 20th Century, the next great invention was the self-loading rifle, Winchester launching the .22LR Model 1903, closely followed by the centrefire Models 1905, 1907 and the 1910 self-loading shotgun, whilst Winchester’s top engineer T.C. Johnson eventually oversaw the design and production of the legendary Model 1912, 52 and 54. Interestingly, with the onset of WWI, Winchester were one of the major manufacturers of the 1914 Pattern .303 Enfield on behalf of the British Government, whilst Browning himself finalised the design of his famous BAR and .50 calibre whilst working at the Winchester factory.

Like many companies, success lured Winchester into even greater expansion, Winchester applying its name to a whole host of peripheral products to be sold through a line of Winchester Stores. Knives, tents, cookers and even roller skates all acquired the famous pony and rider logo, problem was, Winchester made guns and that’s what they were known for. A failed merger, along with the Great Depression, added the final nail to Winchester’s financial coffin; that was until longstanding customer and shooting enthusiast Franklin Olin of the Olin Corporation (that amongst other things owned Western Cartridge) renamed the company Winchester-Western in 1944.

Determined to return the Winchester brand back to the top by rejuvenating the brand’s most popular models, Franklin’s son John Olin personally championed the Model 52 Sporter 12-bore and the introduction of the Model 21 side-by-side shotgun as the best Americans could buy. In with this, Winchester’s famous trick shooting road shows, originally fronted by characters such as Annie Oakley and her friends followed by Adolph and Plinky Topperwein, then Herb Parsons, all did their bit in seeing Winchester re-achieve their number one status. Similarly, John Wayne’s passion for the brand and that all the guns that appeared in his films were from his own collection did wonders since nearly all of Wayne’s rifles and shotguns were still available in one form or another.

The one problem the Olin Corporation couldn’t offset was the introduction of cheaper, mass produced guns by their competition; Winchester’s highgrade manufacturing processes and the increasing labour costs seeing the company’s flagship Model 12 pump and Model 70 bolt-action rifles fall from grace due to their retail prices, Winchester’s market share dwindled accordingly.

Once again, another bout of diversification failed to revive the brand’s ailing fortunes, the troubles compounded by prolonged industrial action by the workforce. Splitting into two, the employees forming the US Repeating Arms Company, whilst Olin retained the ammunition side, bankruptcy of the new arms company in 1989 saw the factory and the brand acquired by the French conglomerate GIAT that already owned the Belgium based Herstal Group that in turn owned FN and Browning.

With the closure of the New Haven factory and the eventual transition into little more than a trademark, the Winchester brand still survives, although for many ‘Winchester to the core’ enthusiasts, anything built after 1964 isn’t a true Winchester, many post-64 guns now built to a price, in an effort to regain the company’s market share. With the bulk of Winchester’s guns now made by Miroku or in Browning’s Portugal based facilities, for many, Winchester is no more. But there are still modern Winchesters well worth owning, the Super-X3 and the Turkish built SXP pump, along with the top end Select models, are all to a degree worthy of the name, even though they have no physical American connection.

For those who insist on the real deal, even a rough Model 12 or 21 are worth buying and having restored, whilst an over-under Model 101 should be snapped up the moment you see one.

Genuine classic Winchesters do appear on dealers’ shelves and whilst many tend to overlook their plain black actions and dark walnut as too basic, the true shotgunner will be instantly drawn to these genuinely outstanding shotguns. Similarly, those who have parted with them, quickly realise their mistake, trying to seek out their shotgun’s new owner, in an effort to buy it back or trawl the internet for a replacement.

Over the years, Winchester has never been found lacking when it comes to commemorative models, the Centennial 66, the Annie Oakley, Buffalo Bill, the East- West Rail Golden Spike, the Canadian ‘Northwest Territories’, the NRA, Boy Scouts of America and the stunning ‘One of a Thousand’.

And so it is with the name’s 150th Anniversary, four of their iconic models have been reintroduced in limited numbers, each one of this quartet well worth adding to any collection, and like all of Winchester’s short run commemorative models, they will increase in value, more so if you only shoot with them occasionally.

Three rifles and a shotgun that true Winchester aficionados will no doubt have their deposits paid with an increasing sense of anticipation as the great day approaches. But even if you’re unfortunate enough not to acquire one of these guns, any and every classic Winchester is more than worth owning.

The first of the four in the lever-action Model 1873 in 44- 40 Winchester that will feature oil-finished Grade VI walnut, crescent butt, straight stock and the classic rifle forend and Ulrich cap. Complete with deep scroll engraving, gold inlays and the 150th Anniversary logo and WRF trademark, the rifle also comes with the traditional 24- inch hexagonal barrel, adjustable rear buckhorn sight and Marble Arms bead. Externally similar to the 1873 the Model 94 lever action is chambered for Winchester’s classic 30-30, but at just 7½lbs in weight it recreates the days of the frontier hunter who needed a rugged, accurate and powerful rifle, in as compact and easy to pack size as possible.

For those who prefer a more conventional rifle, a Model 70 bolt-action in 270 is based on Winchester’s pre-64 design, with a controlled round feed and claw extractor bolt. Furnished with Grade VI American black walnut and a shadow line cheekpiece besides the anniversary engraving, logos, inlays highly polished blued receiver, even the stainless steel sling swivels are unique to this classic hunting rifle. And to ensure accuracy, this Model 70 comes fitted with a cold hammer-forged 24-inch free floating barrel.

The last to stand proud is a recreation of Winchester’s Model 101 over-under 12-gauge, this smoothbore legend, is a shotgun every true shooter should own, has owned, or is still aspiring to own. Fitted with Grade VI walnut with bespoke chequering, the action features deep scroll, gold inlays, along with silver nitride finishes on parts of the action and trigger guard. Similarly, an Ulrich-style forend will hold gloss blued 28-inch barrels in place, meaning this 7lbs in weight shotgun should be able to continue the 101 tradition, that’s providing you can live up to the make and model.

As already mentioned, Winchester’s history is long and, at times, incredibly convoluted, but never dull or uninteresting. The Winchester name still has a magical allure, their classic shotguns and rifles are some of the finest guns you’ll ever shoot with. And, always remember, it was Winchester that John Moses Browning turned to when he needed his designs translating into wood and metal. Reputations may wax and wane but in the case of Winchester, greatness never dies.