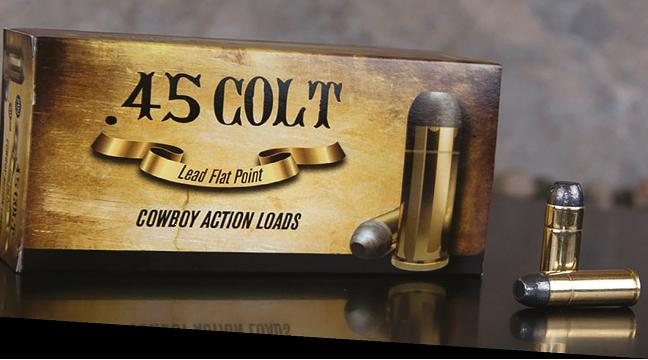 Our subject was born in the early 1870’s, the child of Colt and UMC as one of the cartridges for the legendary Peacemaker S/A revolver. This pairing was adopted into service by the US Army in 1875. As you might have guessed it’s the legendary .45 Colt, aka .45 Long Colt or .45LC. A straight walled, rimmed design originally using a black powder charge of 40-grains FFg black powder driving a .454” dia, 255-grain RN lead bullet. Ballistic claims vary but it is likely to have achieved an MV of just over 900 fps.

It arrived at a time when converted muzzle loaders were still in military use and was an improvement in terms of firepower, reliability and stopping power. Indeed, its ability to deliver almost 500 ft/lbs still rates it as a serious performer! It was so successful that the Colt SAA revolver was soon identified by the name of the cartridge, the Colt 45. No surprise then to find that it lives on today as a popular big bore calibre with Cowboy Action Shooters in both revolvers and lever action rifles. Indeed, it is the bookend to the other legendary revolver/rifle cartridge of the same period, the taper wall .44-40 Winchester. However, whilst Winchester were astute enough to allowed a multitude of other arms makers to produce chamberings for their .44- 40 WCF, Colt adopted a proprietary approach that prevented other makers chambering the .45 Colt. Their loss.

The move from black powder to smokeless propellants took place over a span of five or six years, prior to the turn of the century (1900). As a matter of record, the resulting MV reduced slightly. The other significant change took place during the early 1940’s and was concurrent with the adoption of a much wider range of bullet designs. This was the reduction in the diameter of the bullet from .454” to .452”. All commercially made .45 Colt ammo and bullets are now based around the reduced diameter.

The change of bullet diameter has resulted in dire handloaders tales of assembly problems, poor or non-existent neck tension and jammed revolvers. Let’s clarify things, it is unlikely that you will find, let alone use ammo that pre-dates the change or possess expander dies that were designed for use with the .454” bullet. However, as case and chamber dimensions have remained more or less consistent, we do have a potential neck tension issue. This is exacerbated by the fact that, from maker to maker, .45 Colt case wall thickness’s can vary by a few thou’ and NEW BRASS may well offer insufficient neck tension, requiring a partial nip from your sizer die before use. Before reloading previously fired brass you must measure your expander ball diameter – for safety it must not be larger than .450”. Again, you may need to nip the brass with the sizer or, as I’ve done, have the sizer ball honed down to .448”. All the bullets suitable for use in this cartridge have either a cannelure or shoulder and the case should be firmly crimped into it.

I’m not usually an advocate of the roll crimp – but needs must! As a further safety measure, develop your load with ONE brand of brass and stick with it. I buy only MagTech ammo and get (apart from the wounded cases) around five reloadings.

WHAT, WHERE AND WHY?

Revolver buffs can start a serious collection of Colt SAA Peacemakers for use under Section 7/3 but should heed the warnings about maximum loads. Early black powder proofed revolvers require special care. Modern, stronger revolvers from Ruger and others may not qualify for such use but it’s worth a try. For shooters there’re LBR’s and wrist brace revolvers as well as lever action rifles. From the collectable and classic to the modern action event, there are a host of opportunities to enjoy this historic cartridge.