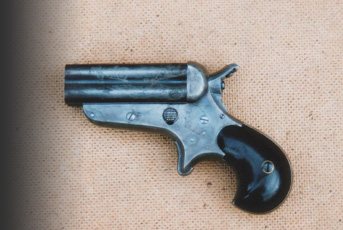 One of Remington’s great competitors in the handgun market was Colt, who was also active in the manufacture of derringers, although the latter confined their production to only three models.  All were single shot and generally all in the same calibre, namely .41 rimfire.  A very small number were produced in .41 centrefire and these are sought after by today’s collectors in America.  Colt’s first venture into derringers came when they purchased the National Arms Company around 1870.  They continued to market the two National models under the Colt name.  The standard finish on both models was blue or nickel-plate, or a combination of both along with a small amount of engraving on each side of the frame, but without the engraving on the barrel.  A slight difference in the profile of the walnut grips will be noted between the National No.2 and the Colt No 2.

Production figures for these two Colt pistols are around 6,500 for the first model and 9,000 for the second. In 1870 Colt was granted a patent for a new derringer which was named appropriately enough the Number Three or sometimes the Thuer after its designer.  This was a completely new design in which the barrel pivoted sideways for loading, a spring-loaded ejector automatically removing the spent case.  An 1872 advertisement for this pistol stated that “This breech-loading derringer can be loaded and fired more rapidly and with less inconvenience than any other kind”.  Finish was as before, but without the engraving and this model was offered by Colt up to about 1912, with a total production of over 48,000 units. This model was popular in England and many will be found with English proof marks under the barrel.  A scaled down .22 short rimfire version of this pistol, known as the Number Four, was produced for collectors from 1960 to 1963, re-introduced in 1970 but dropped soon afterwards.

Many readers will associate the name Sharps with large calibre rifles, but this company too had a share in the market for small, concealable handguns.  Their four-barrelled derringer, in .22, .30 and .32 rimfire calibres was produced in large quantities from approximately 1859 to 1874.  Frames are of brass or iron, the former being silver plated while those in iron were casehardened, with grips offered in gutta percha (a type of rubber) or wood.  Barrels on all models were blued and slide forward for loading and ejection.  They are single action pistols with a rotating firing pin, which is located either in the frame or in the hammer.  Christian Sharps was in partnership with William Hankins from 1862 until 1866 and some of these small four barrelled pistols bear the name Sharps & Hankins.  This popular little gun was also made in England by Tipping and Lawden, under licence from Sharps, until about 1880.  This is another derringer which has been reproduced by today’s gun makers, namely Uberti, with a .22 rimfire version.

Another manufacturer more famous for their rifles was Marlin, but they were also a key player in the nineteen century derringer market.  During their first eighteen or so years Marlin produced a variety of small single shot pistols, not unlike the Colt Number Three model in appearance.  These carried names like the Baby .22, O.K. Model, Never Miss, Stonewall & Victor and were produced in calibres from .22 to .41 rimfire.  It is estimated that about 17,000 derringers were produced by Marlin.

Even though many of these tiny handguns were in a relatively large calibre (.41) they were obviously only short range weapons, due in part to the small amount of powder which could be squeezed in to the case behind a comparatively heavy (130 grains) bullet.  It has been said that, fired from the average derringer at a tree, or other such hard object, from fifteen yards, the .41 rimfire bullet would bounce back and land at your feet.  Perhaps this is why some of the double barrel derringers produced by Frank Wesson (younger brother of Daniel B Wesson of Smith & Wesson fame) carried a little extra sting.  An over and under design not unlike the Remington, but using a different loading operation (the two barrels swivelled on a central axis as opposed to Remington’s tip up design), the Wesson pistol had a sliding double-edged dirk in the recess between the two barrels.  Presumably, if the two barrels had not done the job, your adversary could be disabled with the blade.

The Wesson derringers were made in .22 short rimfire, .32 short rimfire and .41 short rimfire, but only a small percentage had the dirk fitted, making them a rarity.  Some of the .22 pistols had a ring type hammer and were advertised as a “Watch-Fob” model, as it could be attached to the end of a watch chain.

Whilst the pivoting-barrel, single-shot designs such as the Colt and Marlin were the most numerous, there were a great number of variations available to the person that wanted a small, hidden firearm.  In the 1870’s and 1880’s Remington produced a derringer with a 4 shot tube magazine under the barrel.  The design incorporated a double hammer, the larger of which was in fact a breech block.  On pulling back on this block the pistol was cocked and a round was drawn into the chamber in a manner not unlike the action of a Winchester rifle.  Another multi-shot derringer was the Protector “palm pistol” so called because it was concealed in the palm of the hand with the short barrel protruding through the fingers.  It was a .32 extra short rimfire, rotary magazine (seven shot) pistol fired by squeezing the lever on the back.

Another unusual model was the Perry and Goddard single barrel two-shot derringer.  The barrel swivels through 360 degrees and can be loaded at either end, with only the centre section being rifled.  The idea was that you loaded one round, fired it, then placed another round in the “muzzle” turned the barrel round and fired the second round, the second shot taking with it the spent case from the first.  One can imagine this gave a rapid rate of fire, the manufacturers claiming in excess of twenty shots per minute, but how many of us would want to fire a weapon with an obstruction in the muzzle?  Perhaps this explains why there are very few examples of this derringer around today!

The enthusiast who wishes to delve further into the realms of the cartridge derringer will come across other familiar name from the long list of firearms manufacturers.  Starr, Iver Johnson, Forehand & Wadsworth, Bacon and Ethan Allen have all listed these small pistols among their products.  There are many others who have produced derringers and are less well known, their efforts failing for one reason or another.  Students and collectors will encounter a great number of these tiny weapons in many different calibres from .17 to .44, and with firepower ranging from one to six shots.

A visit to an arms fair will unearth some of the more common varieties at prices that will not break the bank, although prices have risen in the last few years.  It should be noted that original antique derringers in .22 rimfire calibre, along with all of the modern reproductions, are subject to the firearms laws in the UK and are therefore Section 5 or prohibited weapons.  However the pistols featured in the photographs, are all made for obsolete calibres on the Home Office list of Section 58 (2) weapons and do not require a licence, providing they are purchased for collecting only.