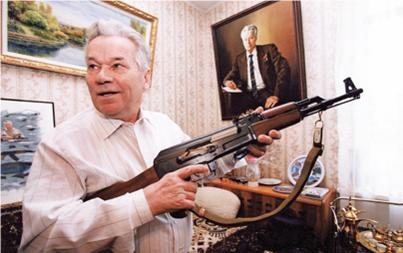 There are a number of firearms that are instantly recognisable, not only to shooters and collectors, but to anyone who is a movie fan, played a ‘shoot em up’ computer game, or has watched a news bulletin. Icons such as the Colt Peacemaker, the Colt 1911 pistol, the Thompson sub-machine gun and the Luger pistol will be familiar to schoolboys and adults alike. But one weapon above all will stand head and shoulders above these as being known to almost all of the civilised World – the Kalashnikov AK-47 assault rifle. Adopted by the Russian army in 1949, and many other nations since, it has also become the preferred arm of insurgents and terrorists everywhere.

Timofey Alexandrovitch Kalashnikov and Aleksandra Frolovna Kaverina were married in 1901. Their son, Mikhail was born in Kurya in the Atlai region of Russia on 19th November, 1919, the 17th of 19 children, only eight of whom reached adulthood. Mikhail himself was seriously ill at six-years old and close to death. His father was a peasant but because he was slightly more affluent than others, he was deemed to be a ‘kulak’, regarded in the early 20th Century to be ‘class enemies’ of poorer peasants. In 1930 the Stalin regime considered the family too prosperous to be true communists, so their possessions and land were confiscated and they were sent to the village of Nizhnyaya Mokhovaya in Siberia, where they had a small farm and supplemented the income by hunting for their food.

It was around this time that Mikhail began his acquaintance with firearms, and he continued hunting until the last couple of years of his life. Shortly after this move, Mikhail’s father died, and, needing to support her family, his mother married a widower, Efrem Kosach, with three children of his own. Mikhail was a bright scholar and could read and write very early on, something of a rarity among peasant families (his mother was illiterate all her life). He enjoyed physics, geometry and literature at school.

His early ambition was to become a poet but upon leaving school he headed back towards Kurya, to seek work but ended up working as an accounting clerk for the Turkestan Siberian Railroad at Matai station in Kazakhstan. Within two-years, he was technical secretary but in 1938 was conscripted into the Russian Army. Because of his small stature, he was assigned to the 24th Tank Regiment, where he graduated from the school of tank mechanics and was assigned as a tank driver. His suggestions for a tank running timer meter was adopted after some revision and his inventiveness was rewarded with the gift of a wrist watch from General Zhukov. He was posted to Leningrad to oversee the production of his meter at the Klim Voroshilov factory. This assignment came to an end on 22nd June, 1941 when German forces invaded the Soviet Union. For the ‘railway’ period of his life, Kalashnikov was awarded the Medal of Honorary Railroadman (the Russians have Honorary Medals for everything – transport driver, road worker etc. and in 2008 the Honorary Medal of Small Arms Maker was named after Kalashnikov).

If at first you don’t succeed

He returned to his regiment in the position of tank commander and was wounded at the battle of Bryansk in August 1941, spending several months in hospital. While hospitalised, he listened to the complaints from infantrymen about the inferiority of weapons they were issued with, against those used by German troops and set himself the task of making improvements. His first efforts were rejected but his talent was recognised and he was sent to work at the Central Scientific Development Firing Range of the Chief Artillery Directorate of the Red Army.

His 1944 project for a gas-operated carbine for the 7.62x39mm cartridge lost out to the Simanov designed SKS carbine but in 1946 his modified version was entered into a competition for a new assault rifle. Against established gun designers, Mikhail’s weapon was accepted and production of the Avtomat (automatic) Kalashnikov began in 1947. The AK-47 was born. It was an immediate success and was adopted as the main infantry weapon of the Russian Army in 1949. He had the last laugh on Simanov, as the SKS was taken out of front line service in the early 1950s – although remaining in second line service for many years – and replaced with the AK-47. The SKS is still used today for ceremonial purposes.

With no formal qualifications or training in engineering, he described himself as a ‘self-taught tinkerer’ with limited mechanical skills, but a deep interest in the study of weaponry. He continued to work on improving his basic design and the original AK-47 has morphed into a whole family of subsequent models. Being employed by the state, Kalashnikov received virtually no royalties for his work but was more than happy to give his time and expertise for the benefit of the mother country for which he was eventually promoted to the position of General. In his later years, he worked as a consultant, promoting the sale of arms for the Russian government.

Mikhail Kalashnikov has been presented with countless medals, awards and decorations by his country and is probably the most celebrated gun designer in the World. In 1998 he was given the Russian Federation’s highest award, the Order of St. Andrew the First Called Apostle. On his 90th birthday, held in the Central Russian Army Museum in 2009, he was named a Hero of the Russian Federation; he has twice been named a Hero of Socialist Labour, in 1959 and 1976. He won the Stalin Prize for Industrial Work in 1949 and the Lenin Prize in 1964. He has been honoured on a postage stamp and in 2004 a large firearms museum was opened in the town of Ishevsk, where the guns are made, and named in his honour. Shortly before his death in November 2013, a smaller museum, in his home town of Kurya, was opened in a 100- year old wooden school house where he studied as a child but he was unable to attend the opening because of ill health.

A silhouette of an AK-47 appears on the flag and coat of arms of Mozambique and the emblem of Timor. He has even had a vodka named after him, with the option of an AK-47 shaped glass bottle! Not bad for a peasant boy whose initial ambition was to be a poet.

He was married twice and his second wife, Yekaterina, who died in 1977, was an engineer and for many years helped Mikhail with his technical drawings. They had four children, three girls and a boy named Victor, himself a small arms designer.

In 2012, he was admitted to the intensive care unit at the cardiac hospital in Izhevsk. He died from gastric haemorrhage on 23rd December, 2013 and was one of the first to be buried in the Federal Military Memorial Cemetery on the outskirts of Moscow. Shortly before he died, he wrote a letter to the leader of the Russian Orthodox Church, expressing guilt for designing a weapon that was responsible for so many deaths. He received a reply from the leader of the church, reassuring him that the gun was legitimately designed as a tool for the defence of his country, and that blame for its misuse was laid firmly at the door of those who abused it.

Mikhail Kalashnikov’s famous (or infamous, depending on your viewpoint) assault rifle entered serious mass production around 1953 and was first used in anger on November 1st, 1956 in the Russian oppression of the anticommunist uprising in Hungary. Since then, it has become the most popular automatic weapon ever produced, being the preferred assault weapon for 50 or more national armies, as well as countless subversive groups worldwide. Its popularity stems from its simplicity – it is said you can learn to use it in two-minutes – its ability to function reliably under all conditions and the relatively low cost of production. At one point, it was estimated that some 15% of all firearms in circulation were AK-47s. A 2009 figure put the number as 100 million units, up to 50% of which were possibly illegal copies as, strangely, the Russian manufacturers at Ishevsk did not patent the gun until 1997.