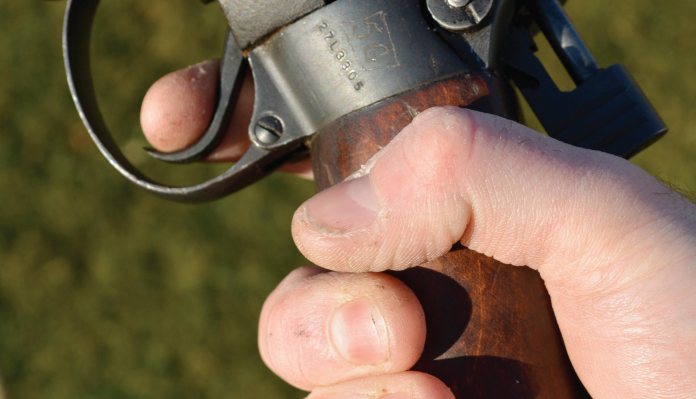 A brief glimpse of a `fresh` batch of Lee Enfield No4 rifles on the counter at Henry Kranks piqued my interest into this vast, yet currently unknown territory. Although it may be assumed I am a great modernist with respect to firearms. I also have huge respect for the engineers and designers who made them as well as the end users!

I immediately decided to obtain one for further investigation and quickly realised it was a subject like Pandora’s box. I was not even going to attempt to cover more than a brief background even though this rifle is on long term test. Also I wanted to see how well I could adapt to a battle-specific design, also could I learn to shoot it and modify my skills to accommodate open sights, themselves one of the factors rapidly changed during the evolution of the Enfield?

THIS IS MY RIFLE!

My test subject was a No.4 Mk 1, made at Long Branch, Canada in 1943 which made it 72 years old, exactly twice my age. I had the pick of many so was spoilt for choice. As all were used, elderly and packaged in thick layers of oils and greases which when wiped clear, reveal fantastically well preserved metalwork and timber showing the personality the gun gained from uses possibly far beyond ones wildest imagination. The actions, magazines and triggers were astonishingly smooth, well made and frankly, put many modern low cost sporting rifles to shame!

I went for a 5-groove model; a barrel with two grooves seemed totally alien to me so I sought comfort in familiarity. The rifling spins anti-clockwise rather than the clockwise we accept as the norm. I won’t go into details but anti-clockwise actually has minute technical benefits in the Southern hemisphere. Kranks generously supplied me with .303 Prvi Partisan 174-grain FMJ ammunition and further .303 bullets (actually .311” diameter), to investigate reloading using Lee dies and Ramshot powder. I took the bold step of seeking some Sierra 180-grain soft point bullets too. If I can gain enough skill and confidence with the gun, I would really like to take it stalking; we shall see!

After familiarising myself with the controls, it wasn’t hard to feel immediately at home and confident with the No.4. Everything works as `normal`, the main difference being the bolt cocking on closing, rather than opening which coupled to a pair of lugs locking at the rear of the action, under the rear sight, gives a relatively short operating stroke that became acknowledged as the fastest in the business! The safety is located rear/left of the action and is a simple lever that pushes forward to FIRE and reverses for SAFE. The Enfield runs a 10-round, double column, detachable box magazine, making it the highest capacity military bolt-action of its day.

However, it was not intended to be run by changing magazines even though a spare was issued with the rifle, it being more a replacement if loss or damage occurred! Instead to be fed by 2 x 5-round chargers, however for us if you cannot get these items then filling through the top by hand is easy. Caution here as the rimmed 303 cartridges have to stack in the magazine one rim in front of another for 100% feed reliability.

In the case of the chargers the rims have to be stacked two up and three down or vice versa, depending on how the rifle likes them. These fit into a charger guide set in the rear receiver bridge and you just push the payload down with your thumb. The procedure looks destined to have rounds spring out all over the place yet with disgraceful simplicity, they just pop straight in with little fuss and off you go, and then repeat for the second charger!
The cartridge headspaces on the rim and not on the shoulder like most modern rimless calibres. This makes the bolt face virtually flat except for the firing pin hole and sturdy extractor claw in the 2 o’clock position. This gets a firm grasp on the case and combined with the virtually hidden lugs

at the back, primary extraction, secondary and then ejection is equally dependable with little effort. Being a Canadian gun, bolt removal is different from the British No.4. The bolt head runs in a long slot on the right of the receiver, which shows a cut-out towards the front. The bolt is pulled slowly open until the head is aligned with the cut-out then it’s flipped up and pulled out. The bolt head screws off to assist keeping the firing pin and hole clean as these would easily get congested with dirt in a rifle used in the most adverse conditions, with minimal opportunity to be cared for.

Cleaning the gun before use was a serious task, all those oils and greases were everywhere and I doubt it will ever get truly free of them. The barrel similarly was a job of work, taking over 400 patches and several hours, solvents, scrubbing, waiting more scrubbing and finally, clean(ish) patches emerging. It was complicated by the anti-clockwise twist always fighting to unscrew the jags and nylon brushes from the rod but I got it done! I did not remove the woodwork, merely cleaned as best I could considering its appearance - part of its life untold. But I did pay special attention to the sights.

The sight consists of a pressed steel, flip-up ladder with a sliding aperture graduated in pre-set stages to 1300 yards. Markings are tiny and in good light, my eyes strained to set them. Also incorporated is a large ring battle sight that is used for shorter ranges and doubtless snap shooting when the ladder is down, it’s estimated to be good at 300 yards. Up front is a large, U-shaped protector with a blade inset in a transverse dovetail. This offers windage by drifting and foresight came in different heights

The No.4’s were originally issued in three stock lengths, Small, Medium and Large. Mine was a medium with a 14” length of pull and seemed appropriate when one considers the gun was designed for use with webbing and heavy uniforms etc. The forend is big and deep with full hand guards on top and protects hands from a hot barrel. However, the butt shows virtually no comb and an almost ‘scant’ pistol grip with a slight rebate for the fingers. The timber is beech, which is a dense and tough wood so well suited for service!

The brass butt-plate incorporates a compartment (butt trap) to store cleaning oils and pull through although mine was long ago corroded closed. It is important to remember at this point that the Enfield is not just a gun to pick up, clean and go! It may well require long term plans and further research to acquire the original accessories and some of the tools to adjust and clean it. It is a classic and part of our shooting history and heritage and although still utterly functional, demands our respect as but a temporary guardian of an iconic tool from recent history. Manufacture, although utterly solid after all these years, is a stark contrast between inexpensive pins and clamped screws to obvious hand finished craftsmanship. This rifle has NOT been re-barrelled and to say it’s bore is excellent would indicate it can’t have had that many rounds through it! Certainly not enough to have ground a badly finished action into such smooth repetitive functioning, it must have started like that!

What really stood out to me was the trigger. I imagined it would be a graunchy, grindy horror yet after cleaning, the first of twin stages offered a smooth 2lb pull through to the solid stop of the second that broke at a dependable 6-7 lbs with a crisp clean feel that was utterly predictable. Of course with open sights and no huge magnification to see how this advancing pressure disturbs your aim, the stock sat solidly in the shoulder and with the trigger’s reach from the virtually straight hand grip being nigh on perfect for my hands, I really fell for it.

Next month I will be covering what it is like to shoot this rifle and how it really measures up for a shooter (me) who has only ever had modern equipment made to the most exacting of machining standards to contrast it against, will I be let down? I don’t want to spoil it, but I have A LOT to say and it is very refreshing to find, let alone write!