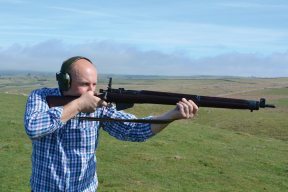 Well after a few months, how can I sum this up other than to tell a brief tale of what I got up to with my No 4 Enfield? Initial run in, or should I say familiarisation with the rifle and its use was undertaken with PPU 174gr FMJ ammunition running at a mild 2300 fps. It allowed me to quickly register the correct technique on the trigger and begin to figure out the sights for Part 1 but since then read on.

I first shot the gun with my front hand rested of a bench at 100 metres. I anticipated fairly stout recoil, though this was not the case. I don’t fear a gun that kicks but that brass butt plate had all the hallmarks of a design that would just slide under my shoulder prone, and end up digging in harder with each shot. However, it’s unfair to judge a military rifle against a modern sporter. I was quickly down prone with a bulky rucksack giving that forehand support and shooting really became a pleasure. The feeling of familiarity and consistency with the sights was aided by some targetry experimentation and in the end an 8” red diamond seemed ideal to hold the foresight blade under whilst I patiently squeezed the heavy, but disgracefully consistent and predictable trigger. I had a video camera on my target so I was `walking` shots into place via my spotting scope as I experimented with the sights. I’m so used to working in MOA or Miliradians these days, the ‘seat of the pants’ nature of iron sights was actually rather fun!

The battle sight aperture is, regulated for 300 yards and seemed huge but it was interesting to note just how quickly the head learns to find its ‘spot’, and stay there shot after shot. Also how you then feel subconsciously aiming and steering that foresight as you learn to focus on target. You have to remember and visualise your sight picture each time and as I suspected, this is a gun whose character you learn, adjustments are limited. The ladder sight was beautifully smooth to flick up into position. After years of using pinhole apertures on compound bows I did feel at home as the smaller aperture not only locked head position more securely, but gave a little more clarity to the lengthy visual depth of field my brain was trying to hold. I imagined it a little like a shotgun, focus on what you want to hit and try not to think too much about how to hit it, allow muscle memory to develop and the subconscious mind will handle itself with brilliant consistency if you don’t interrupt it all the time.

At this time I was maintaining a group of around 8” for 10-15 shots at 100 metres which shrank nearer to 6” as I played with the ladder’s settings (fixed and tiny to see) to coincide my point of aim and impact. Elevation was adjustable but I was unable to get hold of a windage tool. The foresight blade sits in a dovetail and is drifted left to right as required. This Enfield seemed to like staying a little `right` and the blade was fully across to the right so the tool would not have helped! With such a novice at the helm it is hard to critique the ammo as it performed far better than my own skill could prove otherwise. Cleaning the rifle was a serious task, FMJ bullets seem to invite the hot gases on their base to vapourise lead from the exposed core, and it takes some shifting so as my supply diminished, handloading began.

BLACK TO NITRO WITH CORDITE BETWEEN

Throughout its 127 year life, the 303 evolved from black powder with round nose bullets through to 150 and 174-grain pointed with nitro propellants, cordite bridging the gap at the turn of the last century. I realised to some extent I would be tuning handloads to the sights, rather than ladder testing for ultimate accuracy nodes as I would normally. As is often the case with experienced handloaders, familiarity with the recipe breeds confidence in likely results. Lee dies were used on the excellent PPU brass cases and I set the Full Length sizer a little long to minimise the amount of shoulder `bump` on the cases. Comparing a new case to a fired one clearly showed how the rim/headspaced round has plenty of room to fireform, easily in the 0.04” region and minimising the amount the brass would be re-worked time after time, for a single specific chamber can really improve case life. I followed Ramshot’s 303 data to the letter, slightly nervous regarding its weaker rear-locking action.

The chronograph immediately showed steady 2450 fps, consistent with 40 fps extreme spread. A gentle ladder test to eke out more velocity showed no difference in the accuracy (my ability being the limiting factor) but all the cases came out clean, functioned perfectly and no brass damage was noted. 303 is a nice case to work with, actually using the same shell holder as my 300 Win Mag, with a nice gentle taper on the body and wide mouth to accept those .311” bullets. With a powder requirement of around 42-grains it is financially close to a 308 to shoot and will retain a good barrel life, if the first 72 years haven’t satisfactorily impressed you up to now. The gun didn’t miss a single beat in over 500-rounds fired, remained easy to clean and didn’t seem to really suffer from fouling day to day either. A skilled armourer could no doubt tweak the forend bedding to shift the point of impact left but I didn’t dare tinker.

I considered taking the rifle for a Roe deer early in May or June but although load development with the Sierra 180-grain SP was equally simple, I just didn’t feel quite 100% confident in taking a shot onto live quarry without more field preparation time. I might leave this stage until later in the year but with 2200 fps providing a steady but doubtless effective 1900 ft lbs, I was in no hurry. I don’t have a huge amount of deer stalking and part of my background of limited hunting availability is what has made me almost OCD with my shooting preparation, avoiding wasted chances.

If there is one thing I wish I could add to the No.4 it is a precision rear sight, I never seemed to be able to get totally comfortable with the position and my noted settings never really ran in any kind or proportion to the markings available on the ladder, although I was making solid hits. By this stage my handloads on target with the 174-grain Matchkings were holding a 4”, 10-round group but I must admit, day to day this did shift a little as I was always remembering to hold a ‘little left’. The gun (or perhaps me) just couldn’t help me drifting right and I put this down to lack of practice, solid cheek weld and the fact that no matter how much my brain tried to automatically centralise the sight pictures radially, that right-biased blade must have aggravated me. Likewise the ability to replace that blade with one of a different height may have assisted my elevation setting consistency.

Although I soon settled toward shooting in many varied positions I would have liked an extra inch on the stock. Iron sights punish inconsistent head position fiercely and this comes back to the fact that you really need to put the hours in on this gun, and probably modify it slightly to reap full rewards. What is promising though is that its mechanical consistency and operation reinforces this confidence to work at it! As every time you shoot, you learn a little more and enjoy it just a touch more, those groups and placement keep getting better!

THIS IS MY RIFLE

At longer ranges when testing the gun on open land for my deerstalking trip, I clicked with the gun and on animal sized targets allowing a good sight picture. Even at 400 yards, the shooting pleasure was just ridiculous, partly militaristic fantasy, but also the joy of achieving consistent hits was fantastic, real shooting if ever I have experienced it!

There were still misses but those larger targets and silhouettes changed the aiming procedure, the foresight seemed to rest more naturally than even on a large specific circular target and this is undoubtedly psychological because you focus mentally on the quarry and required kill zone. Standing and kneeling shots were excellent fun and really required good trigger control as well as utilising the sling for best effect on target. I will probably wear this gun out, the shooting pleasure it brings is ridiculous and I cannot see myself parted from my No.4. This is MY RIFLE and has taught me well, made me a better shot and puts a smile on my face every time.