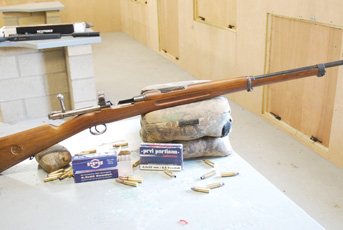 There’s little doubt that Mauser bolt-action rifles and variants in one form or another armed the majority of the non-British aligned world before the First World War 1 and even past World War 11. The generic M98 action is best typified by the German, full length G98 rifle and shorter K98 carbine chambered in 7.92x57mm. However, for classic shooters today there is another choice of even earlier vintage and that is the Swedish M96 Mauser or Gëvar m/96.

I got into historical firearms many years ago and remember swapping a lead melting pot for an old M96, it seemed like a good deal and it was. A bit old and battered on the outside the rifle showed a good bore and decent action and it shot very well, with the standard iron sights. This was without doubt the rifle that started my interest. A few years later I had a number of other guns – SMLE, Lee Enfield No4, Schmidt Rubin K31 and Nagant M1944 Carbine. I then got the chance to get a mint M96 as a colleague had bought a hitherto undiscovered surplus quantity of them.

The basic M96 rifle is a classic design, with a straight-hand butt, large bolt-handle that sticks out at 90° to the action and a blade foresight with a tangent-type at the rear. There were a number of variants including a carbine and a sniper gun, but the M96 is the infantry model. Feed is from a fixed, top-loading, 5-shot magazine, the military would have used stripper clips for loading. Chambered in 6.5x55mm Swedish the M96 action is not as strong as the M98 action, but shows the same receiver layout with a flag-type safety and a very long cocking piece.

Production began in 1898 at Carl Gustafs stads Gevärsfaktori in Eskilstuna, Sweden. Guns were also made by Waffenfabrik Mauser Oberndorf Nekar in Germany. Interestingly all rifles regardless of where they were manufactured used Swedish-supplied, high grade tool steel alloyed with nickel, copper, and vanadium, a product noted for its strength and corrosion resistance.

I also discovered the M96 was supplied in limited quantities to Finland for the Winter War against Russia. They also probably served in the Continuation War when the Finns fought with the Germans against the reds too.

Typical of many service rifles the M96 found favour with civilian shooters as it does today. Yes they shoot well with the standard iron sights but the true target boys fitted aperture sights, much like we see now on TR rifles shot at Bisley. My research shows there were a number of options on the sighting equipment, but one of the most common was the Soderin, which I have seen on a number of British-owned M96s.

I saw my first Soderin conversion at Fultons (Bisley) many years ago and was surprised to see this more precision set up on an old service rifle. It consists of a large tunnel at the muzzle, which replaces the standard blade, which holds a replaceable aperture element plate, much like the old Sharps BPCR system. This is held in by a screw-in ring. The standard, barrel-mounted tangent-type is removed, which leaves in my opinion a rather untidy gap in the line of the handguard!

The rear sight, which is fully adjustable, is screwed to the rear receiver bridge. This tall assembly consists of a protective ring with an aperture inside, this has a small end cap and when removed it’s possible to drop in different sized sighting tubes to suit conditions. My example came with just one fitted and it would seem likely that a replacement set would be hard to find!

Elevation is controlled by a drum on top which is marked from 1 – 16, to raise the point of impact dial up. Top to bottom movement is around ½” and testing showed that at 100-yards I had to drop the aperture all the way down. Windage uses a drum on the left of the base. It’s marked H?V, with H being right and V left. A vernier scale and pointer on the base shows you where you are. As all adjustment is on the rear you dial into the error, e.g. rifle shooting right, correct to the right. For precision iron sights the Soderin set is capable!

The M96 showed few vices, the straight-out bolt handle takes a bit of getting used to, as does the 3-position, flag safety, which gives SAFE (bolt locked) right, SAFE (bolt free) 12 o’clock and FIRE left. The action cocks on closing so a little more effort is required to chamber and close the bolt. Rounds load easily by hand, though there is a charger guide if you can get hold of clips. One idiosyncrasy of Mauser military bolt-actions is the automatic last round hold open. When you have fired and ejected the fifth round the magazine platform rises and blocks forward bolt movement. Refilling pushes it back down, but it’s something to be aware of none the less.

For testing Henry Krank & Co Ltd supplied some Prvi Partizan (PPU) ammo, which they import. This is a 139-grain FMJ, which was the standard military-style load for the Swedish 6.5x55mm. This old timer has a great reputation for both accuracy and effectiveness even to this day and is probably the most popular metric calibre in the UK.

The aperture sights offers improvement in precision over the standard blade and U-notch set-up. I normally except a military bolt-action of this type to shoot into 4” @ 100-yards, but the Soderin-equipped M96 can near half that on a bulls eye target. However, looking though two tunnels and two tiny holes does reduce what you can see and does not suffer low light well.

Personally I will stick with my standard M96, as though appreciating the added accuracy I prefer the issue sights for general use.