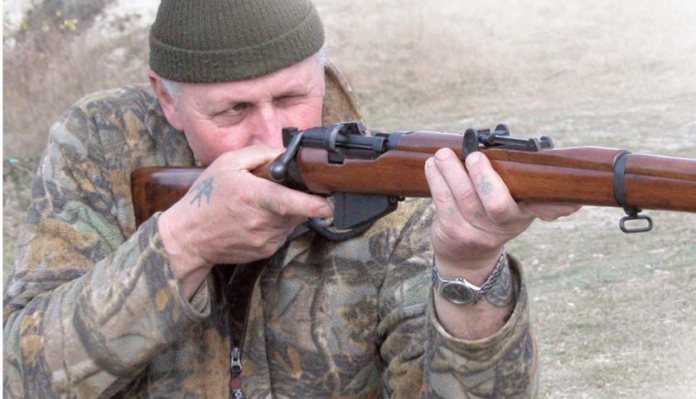 Before all you ‘rivet counters’ out there start writing in and complaining about my lack of knowledge on the minutiae of these two rifles, let me just say this: I’m a hands-on shooter, who has shot an awful lot of kit, including military small arms and the bigger stuff in both army service, hunting and as a gun writer and general shooter. Yes, I have good technical and a working historical knowledge but I don’t give a damn about the difference between the screws on the Mk 1, to those on the Mk 3 whatever, or why they changed from walnut to beech.

You get the idea? At the end of the day, the goal is good and safe shooting, with a big dollop of fun and experience thrown in and that’s what I’m aiming for here. Editor, Graham Allen, asked me to do something on what are probably the two most iconic, military bolt-action rifles of the 20th Century. I speak of course of the Mauser G98 and the Short Magazine Lee Enfield (SMLE). If you want the history then it’s written down and plentiful.

Suffice to say, Mauser had been making military rifles since 1888, with the second to final model being the full-length Gewehr G98 (rifle of 1898). The Lee Enfield morphed from the original Lee Metford, our first repeater, into the SMLE (Short Magazine Lee Enfield) and from there into the improved No 4 family.

Though both started life as military projects, the rifles are as chalk and cheese in terms of build specifications, design and layout. Both underwent changes in the 1930s and 40s, with the G98 being shortened into the K98, now showing a more practical, turned-down bolt handle and simplified rear sight. The SMLE was morphed into the No 4, with improved, aperture sights, exposed muzzle and the switch to a socket-type designs remain the same.

Build quality of the G98 and SMLE is about the same, with walnut furniture and good quality bluing; back then they knew no other way! Visually, the Mauser was elegant looking and it’s easy to see the rifle that was to become the wellspring of most modern sporters, even today. The Enfield was less well favoured visually, but its pedigree is that of a true fighting bolt-action and that, at the end of the day, is what counts!

The major difference between the two are the 8mm uses a rimless, bottlenecked case design, whereas the 303 was rimmed, the latter requiring certain criteria for reliable feeding.

Having shot both calibres, I feel the 8mm is the better design in terms of ability, a fact attested to today by its continued popularity, as a hunting calibre! For example, I recently bought an 8x57 JS barrel for my Blaser R8 straight-pull! The truth is today that there are very few, if any companies producing 303 calibre rifles. The biggest use being military surplus rifles by classic shooters.

However, where the 303 aces the Mauser is in capacity! The G98 has a top-loading only, fixed, 5-round magazine, whereas, the SMLE uses a detachable 10-round magazine. Saying that, both rifles were intended to be loaded by 5-rounds clips (chargers) of ammunition, though originally the SMLE was issued with two magazines, the second being a spare if the first was lost or damaged. The downside of the 303 is the rims have to be stacked in sequence; either 2-up and 3-down or vice versa, to ensure 100% feed reliability. No such issues with the 8x57! Ammo was issued in 50-round bandoliers (10 clips) and my experience as an Army Cadet in the mid 1960s with the No4 was we checked the clips prior to shooting, to ensure the cartridge sequence was correct.

Today, ammunition is plentiful for both calibres, with good duplicates of the Mk VII 303 ball load and even a few expanding bullets for hunting. The 8x57 is more prolific, though I have never seen a duplicate of the old service 1905, 152-grain Spitzer load. There is however a lot of 196-grain FMJ match ammo and huge choices on hunting bullets. For the test, I used Prvi Partizan 303 British (174-grain FMJ) and also their 196-grain FMJ Match in 8x57 JS.

So, let’s look at the individual features! The G98 is a fulllength rifle at 49.2-inches, with its 29.1-inch barrel and weighing 9lbs it’s overly long and a little unwieldy, certainly with a bayonet fitted. It has a 3/4-length, one piece, pistol grip stock with, separate upper hand guard retained by barrel bands. The bayonet bar is incorporated into the nose of the forend, along with a 1/3rd section of cleaning rod. Sights are typically ambitious, with a barrel-mounted ‘Lange Visier’ (long sight), cut for 400- 2000-metres, with a V-notch. At the front, an unprotected, ramped blade set in a transverse dovetail gives windage/zeroing correction. The open-topped action shows an integral clip guide for filling, with the front and rear bridges being of different heights.

The bolt locks by twin, forward lugs, with its huge, signature external extractor and is a strong and effective design. The handle sticks out at 90°, which is not ideal in terms of fast operation and the action cocks on opening.

There’s a 3-position, flag-type safety catch located on top of the shroud. Flipped to the left, it’s on full safe (bolt locked) in the middle, safe with bolt operation and all the way over to the right, fire. Mauser is also credited with designing the controlled round feed system, which many companies went on to incorporate into their sporting rifles years later, with perhaps Winchester’s Model 70 being the most notable example. From the box, the G98 is an elegant looking design, back in 1976 I owned a brand new/unissued Ludwig & Lowe Brazilian contract model in 7x57mm and it was a real beauty!

The SMLE is more like the ugly sister; however, I also like its bulldog-type looks but it offers that one quality prized above all others for a military rifle; PRACTICALITY! The barrel is 25.2-inches with an overall length of 44-inches and it weighs 8.8lbs. The stock is in two major pieces: the butt, with its scant pistol grip and low comb, screws to the rear of the action, different lengths were offered to sort individual length of pull (LOP). It features a trap in the plate for a cleaning kit. The forend wraps around the action and extends to the muzzle, where it’s covered by a steel cap that also incorporates the bayonet lug and foresight protective wings. As can be seen, the muzzle is totally covered, as is the front sight. There are two handguards on top, so the barrel is fully enclosed.

The rear sight is a tangenttype and similar to the G98s in function, though simpler and is also graduated out to 2000-yards and is also protected by wings. Though the effective range was around 500/600-yards, rifles were used en-mass for long range volley fire in the First War, which could be effective. The front sight is a transverse blade on a block for zeroing; however, the nose cap had to be removed, so a tool could be used. Locking is by a massive, single lug that engages with the right side of the receiver, which is incredibly strong. Unusually, the bolt head is screwed on and can be changed for ones of different length, which allows a degree of headspace adjustment. The bolt handle is turned down and easy to operate and the action cocks on closing, some say it’s better, others not! There’s a clip guide at the rear too. The rear of the bolt has a manual cocking piece, which allows it to be set at full and ½-cock if required. A lever-type safety is located rear/ left of the receiver and pushes, forward to fire and reverses for safe (bolt locked) and is far better positioned and easier to operate than the Mauser.

Research shows that a good rifleman with an SMLE in their day could produce a rate of aimed fire of between 20-30 rounds a minute, which is impressive. Given the classic nature of the rifle, the NRA’s Trafalgar classic meeting has a stage called the ‘mad minute’ that is aimed mainly at Lee Enfield users. Saying that, the G98 is no slouch either!

My thanks to Henry Krank & Co Ltd, who supplied both rifles for test, along with some PPU ammunition. The SMLE was a Mk III* with a good bore and reasonable blueing, the furniture, though sound, was dirty; something you have to accept with surplus rifles such as this. However, the G98 was the 100-year anniversary model made in 1989, just before Mauser went bust, with 1000 units being produced. It seems likely that the actions were original and just refinished and engraved, it’s a fine example of the marque and unique too. Much to my pleasure I was allowed to shoot it. Original G98s are around and can often be encountered as contract/export rifles like my Brazilian but they can command higher prices.

Given the limitations of iron sights, I shot at 100-metres using a 2x4-inch white rectangle as a target. The G98 kept its rounds either in or just outside the shape, the SMLE a bit less, at about 4x4-inches but both acceptable for this sort of equipment. The G98 was smooth to clip-load with reliable feeding and a very pointable design. However, that bolt handle causes the gun to roll left as you operate it and it’s better to drop it from your shoulder to cycle the action. Equally the flag safety is far from practical or instinctive.

The SMLE is handier, being shorter and marginally lighter, though the clips are not so slick in use, I found it better to polish the insides up a bit which does help. However, that 10-round capacity makes up for that. Bolt operation is much better, with the rifle easily maintained in the shoulder, though the cock-on-closing bolt does mean a tad more effort as you chamber. The safety is excellent, being operable with the firing hand thumb, with less disturbance to the firing position. Felt recoil is about the same with these two and those metal butt plates slamming into your shoulder can get a bit much, certainly on long courses of fire! I fitted one of Henry Kranks, slipon leather recoil pads and it helped. It also improved the very short LOP of the SMLE.

Making the call on which rifle is better is not easy, as I like both for different reasons. But if competitive shooting, and there’s lots to do, is your thing, then I think the SMLE has it! Henry Kranks is probably the premium source of military bolt-actions of many types and their PPU range of ammunition has FMJ service-type loads for most associated calibres.

Price-wise the SMLE on test was £525, with the unique G98 being £1295. G98 contract guns, like the Persian Mauser, show at £305. I’d recommend a trip up to Kranks, as they have racks of this equipment that also includes Schmidt Rubins, M96 Swedish and other K98 copy Mausers, Russian Moisin Nagants, along with both SMLEs and Lee Enfield No 4 in a choice of marks and models and also P14s. I will be looking at other guns in this class for the future, as they represent a fun, challenging and cost-effective piece of shooting history! Krank’s slip-on leather recoil pads are £22.40 and they do a cheaper rubber one at £6.50, both are well worth a thought for these old thumpers.