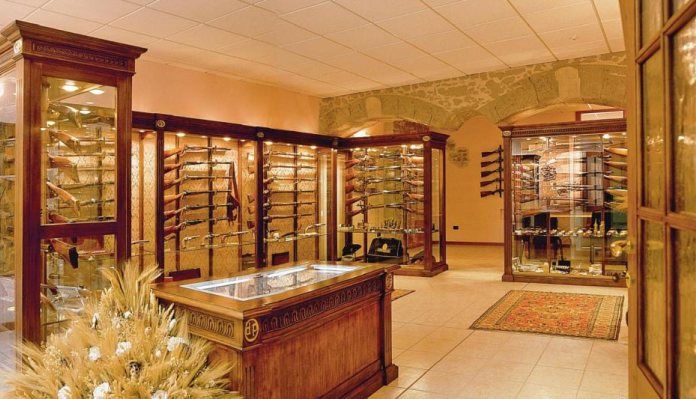 On the morning of the 11th May 2005, I sat in the foyer of a small hotel in Brescia, Italy waiting for the driver to collect us for the second day of a short trip to three of the area’s reproduction firearms manufacturers. We were scheduled for a visit to the Pedersoli factory and our driver turned out to be none other than Mr Pierangelo Pedersoli himself. After a guided tour of the factory, we had lunch, visited the Italian proof house and met one of the engravers who adorn Pedersoli firearms. I’m sure he could have found more productive things to do that day, but it was one of the most entertaining days I’ve ever had and I cannot thank him enough.

Shotguns have been the mainstay of the Italian firearms industry in Brescia for hundreds of years, with Beretta having a presence in the area since the 16th century. There are still large numbers of small shops making bespoke guns for this sector as well as the larger shotgun manufacturers and those turning out a variety of reproduction firearms. One of the largest of the latter group is Davide Pedersoli & C. who themselves started out making shotguns.

The company was founded by Davide Pedersoli in 1957 making side by side guns along with an over & under model built on their own patent. In 1960 they began producing muzzle loading guns and within 10 years this had grown to be the major part of their work, so much so that in 1973 hunting shotgun production was ended to allow them to fully concentrate on reproduction muzzle loading firearms. As demand for the guns grew so did the need for accessories, and this sector is now a major part of the business, including items for loading, cleaning, carrying and displaying, as well as optional sights and spare parts. From the beginning of the venture in 1960, they had produced their own powder flasks and this area too has expanded with their current catalogue showing a couple of dozen examples. Such is their inventory of extras that a new company was formed, U.S.A. (Universal Special Accessories) to handle this department, which includes not only parts for their own products, but accessories suitable for muzzle loading in general.

Sadly, Davide Pedersoli passed away in 1996 and the running of the business passed into the hands of his son, Pierangelo, assisted by his brother-in-law Giovanni Gottardi. Ensuring that the Pedersoli name is carried to the next generation, Pierangelo’s son, Stefano, takes an ever-increasing interest in the business and can be seen on many of the company’s videos giving knowledgeable and informative advice on new products. It’s obvious from watching him that he shares the passion and pride that his father has for their products.

In 1982 the company decided to become fully autonomous by bringing the manufacture of all parts in house, giving them total control over the quality of everything from the smallest screw to the barrels and stocks. The latter are manufactured from American walnut or maple and large piles of this can be seen around the factory, which is constantly replenished as it is dried and cut. There will usually be around two years supply of wood on hand and from delivery to final assembly is around one year. The rough blanks are cut with a band saw, with the operator trying to get the maximum pieces out of each slab, but even so up to 50% can be lost at this point. Final shaping and inletting for parts is done on computerised machines, with some hand fitting required for assembly. Any sawdust and shavings are collected in hoppers and, with the waste from the blank cutting stage, goes to power the boilers that heat the factory. After final fitting and sanding, the oil and any stain is applied by hand.

The latest CAD-CAM systems allow them to ensure exact duplication of parts and to instantly tweak and modify items as may be required by customers worldwide. Although this modern machinery will relentlessly turn out identical parts, there is still a certain amount of hand fitting and polishing that goes into ensuring that every gun leaves the factory as near to perfect as possible, both mechanically and cosmetically. One process which fascinated me was the straightening of a rifle barrel by hand on a piece of equipment that looked like it had come right out of the 19th century.

The Pedersoli range of muzzle loading arms can truly be described as international as there are single-shot pistols representing a number of European countries as well as those from the early settling of the American West. Whether your preference is for flintlock or percussion, you will surely find something among the 40 or so models in the catalogue, many of which can be supplied in fitted presentation cases. Their deluxe models are works of art. Their sole percussion revolver now is the Remington New Model Army, having eliminated the Rogers & Spencer from their line-up.

The assortment of black powder long guns is even more impressive, again offering models in both flintlock and percussion. The range includes everything from a simple American gun as might have been used by early fur trappers, up to serious target models like the English Gibbs. You will find the Brown Bess with a barrel approaching 4ft long as well as guns from the American Civil War and the Napoleonic era. For good measure there is a range of double-barrelled shotguns and, should you fancy a bit of tiger hunting, a .50” calibre Howdah pistol with a detachable shoulder stock. Whatever tickles your fancy, there is a full range of equipment and accessories to aid your enjoyment.

Load from the rear

Pedersoli’s move into the reproduction firearms market was initially focused on muzzle loading guns, but they have since expanded their repertoire to include several famous breech loading rifles from the American frontier. Their range of Sharps rifles is second to none, with everything from a .22LR model up to the mighty .45-120, with calibres, barrel lengths and finishes to suit just about every taste and wallet.

The Remington rolling block rifle is also well represented, again in a variety of calibres, and their three versions of the Springfield Trapdoor are among my favourite single-shot rifles.

More recently they have entered the repeating rifle sector, with superb recreations of the Winchester 1886 rifle, in both traditional and modern guises. Sadly, their version of the Colt Lightning slide-action rifle is not available in the UK. A walk along the shooting line at a serious long range rifle competition will find several competitors using Pedersoli products.

Their sole entry into the cartridge revolver sphere is in the form of a hybrid Colt reproduction. Based on the action of the famed Colt Single Action Army, with a grip more akin to the Colt Model 1887 double-action revolver, the Doc Holliday is a .38 Special pistol available in blue or nickel – unless you live in the UK of course. In which case it is not available full stop.

Pedersoli arms and accessories are imported into the UK by Henry Krank and their free catalogue will indicate which items are available for sale. For up to date prices check out their website. For further information visit the Pedersoli website and sign up to their newsletter. If you are one of those who like to have a paper catalogue you should be able to purchase the latest edition online.