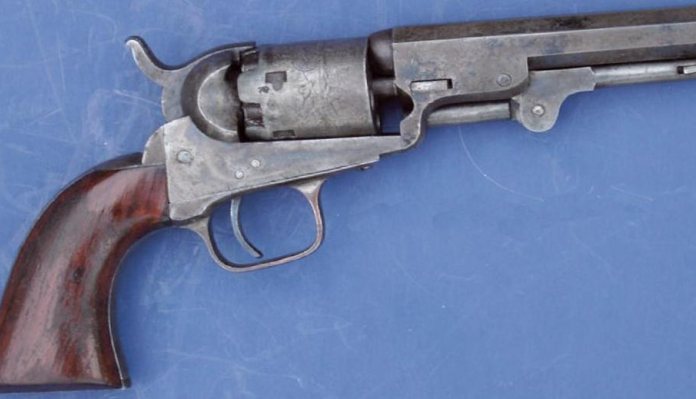 Despite Colt’s bold statement that his order books were open on 1st Jan 1853, the factory was far from ready to deliver revolvers at that time. Pistols were still being imported from America, along with parts to be assembled in London. It would be June before any guns were ready and a number of these were Dragoon models (the Dragoon was never manufactured in London), along with the 1849 Pocket and 1851 Navy Models, assembled from Hartford-made parts.

By the end of that year, however, the factory was about ready to build the pistols from scratch, with steel provided by Thomas Firth & Sons of Sheffield. This Yorkshire company was also shipping steel to Colt’s American factory and would do so until the late 1860s.

It is said that it is an ill wind that blows nobody any good and this was about to prove true for Sam Colt. The winds of war were blowing in the Middle East, and a riot in Bethlehem led to the outbreak of hostilities between Turkey and Russia in October 1853. By March the following year, France and England had declared war on Russia – the Crimean War had begun.

Realising that their armaments were outdated, the British government set up a Select Committee on Small Arms to source the required weapons. Colt was approached and offered to produce one million muskets in 10 years, but he also knew that this was an opportunity for his London manufactory to cash in on the need for revolvers.

In late January 1854, Colt, along with Deane, Adams & Deane, was asked to supply a sample of a revolver for ‘Naval Service’ for evaluation by the Board of Ordnance, and five weeks later Colt received an order for four thousand of his 1851 Navy Model at a price of £2.10.0 each (that’s £2.50 for those too young to remember proper money!), the guns to be sent to Portsmouth for distribution to ships. More orders followed and by October it was reported that some ten thousand revolvers had been supplied to the Baltic Fleet.

The factory at Bessborough Place was now running flat out and on 23rd December the government ordered another five thousand Navy pistols for the Army in the Crimea. Colt was also supplying percussion caps, while Eley Brothers produced millions of paper cartridges.

Alongside the 1851 Navy Model, the London factory was also producing the smaller, .31 calibre 1849 Pocket revolver, essentially a scaled-down Navy, which was a good seller in the civilian market. Again, the grip straps were made from iron and all told some eleven thousand examples were manufacture. Whereas the Navy was manufactured in only one barrel length, 7½-inches, the Pockets were offered in 4-, 5- and 6-inches variations.

On 2nd August 1855 Colt received his largest, and what was to be his last, order from the British government. To replenish depleting stocks on hand, nine thousand Navy revolvers were to be sent to the Tower of London. The order was completed by October but just four months later the armistice was signed in the Crimea and the end of the war was the death knell for the Colt plant in London. Even if the war had dragged on longer, the outcome for Colt would have been the same, as the War Department had decided to adopt the improved double action Beaumont-Adams revolver as the official service revolver.

Operations did not cease immediately, as there was some interest in the Colt revolvers from the civilian market, but without large orders for the military, either British or foreign, there was little hope that the factory could remain a viable proposition. For some time, the government ordered parts, accessories and ammunition but with no further orders for arms, Sam realised that to continue was futile.

On a visit to the factory in June 1856, shortly after his marriage to Elisabeth Jarvis, Sam debated whether or not to produce the Roots model sidehammer rifles and pistols in London, but obviously decided against it for whatever reason, and in November, after receiving his final payment from the British government, he gave the order to shut down the steam engine. Colt’s London production had come to an end.

Shortly afterwards, Sam left for America and the work of dismantling the machinery began, probably overseen by some of the American contractors with the help of some English labourers. Some of the machinery, deemed unusable, was destroyed with more being packed up and sent back to Hartford. Some of the machines were moved to an address in The Strand, where a small manufactory was established, possibly to assemble the many parts that were on hand from Bessborough Place. According to the London Directories, Colt had vacated these premises by 1861.

Colt was mulling over what to do with the building at Bessborough Place, when he learned that his lease had expired. He wanted to renew it and transfer it to a third party, but the Office of Works refused and it was taken over by the War Department.

The mighty Dragoon Charles Dennet was still in charge of the English sales of Colt products and from his new base at 14, Pall Mall, was having some success in selling imported Dragoon revolvers for use in the Indian Mutiny.

It had been reported that maddened Sepoys could take all six shots from the .36 calibre Navy revolver but still get close enough to kill the shooter, but apparently one ball from the larger Dragoon was enough to get the job done. Back in the USA, it seemed obvious, by the end of 1860, that there would be a war between the North and South and Colt sent a request to Dennet that he should send to America all available arms from London.

Dennet complied and sent around 1500 revolvers, along with accessories, almost immediately. There was doubtless a good supply of revolver parts still in London, as many more were sent in the ensuing few months. During the conflict, the London Agency sourced and supplied large numbers of guns from the continent, to supply the Union forces.

By the end of 1861, for unknown reasons, Dennet had been replaced as the London agent by Baron Frederick von Oppen, who was married to the widow of Sam Colt’s late brother. This was to prove an astute appointment, as von Oppen would prove a loyal servant for some years.

Passing of a legend

In the spring of 1861, following a trip to Cuba, Sam became very ill. The official diagnosis was “inflammatory rheumatism”, better known as gout, although it seems his wife appears to have made great efforts to hide the true nature of his problem. By December, he was in a serious condition, but rallied a little over Christmas and the New Year, only to suffer a relapse in early January. Sam passed away on January 10th 1862. Elisha Root took over as the head of the company.

Although the Hartford factory was committed to supplying the Northern Army during the Civil War, they still managed to send a good number of revolvers of all types to London, where civilian sales were brisk. At the end of the War, despite the disastrous fire of 1864, Hartford had managed to amass an excess of pistols and several thousand Navy revolvers were shipped to London with von Oppen told to sell as many as possible to foreign governments. The baron’s first task was to have the guns proved before he could sell them and he negotiated a 20% reduction in the 1/6d (7½p) fee that the Proof House charged for this work. He subsequently sold four thousand of the 1851 Navy to the Egyptian government.

By the late 1860s, the sale of percussion revolvers was waning, apart from small numbers to the far east, but their fortunes were revived when Turkey and Russia went to war in 1877. Sales in this area had been steadily increasing prior to the conflict and by the end of 1878 some six thousand had been sold through the London Agency.

In 1876, a change in English law meant that H.M. Customs prohibited von Oppen from importing arms that were stamped with the London address, but they were allowed to mark the side of the barrels with the notation “DEPOT 14 PALL MALL, LONDON”, as well as the American name and address on the top. A second accusation was that he was selling and storing unproved arms, as he had not informed the Birmingham Proof House, as well as that in London, of their arrival from the USA. Over one thousand arms were confiscated but when the case came to court, charges were dropped because of Colt’s good relationship with the London Proof House.

Baron von Oppen continued to champion Colt’s products in England and Europe until his retirement, due to ill health in 1896. Among his credits, is that he helped in the formation of the Gun Traders’ Association. He was also responsible for a special marking on the left side of Colt No. 3 derringer frames. This was a small rampant colt and a letter ‘C’ to differentiate the official Colt imports from the grey imports brought into England by many retailers. His successor, James Julius Lawrence, held the reins until 1902 when he too retired, and shortly afterwards, a long-time Colt employee, James Goodbody, inherited the manager’s role. Goodbody was responsible for enhancing Colt’s reputation at Bisley, but when he died in 1913, there was no obvious replacement. Rather than lose a presence in London, Colt closed its own offices and transferred its agency to the London Armoury Company. The agency had moved from 14 Pal Mall to 26 Glasshouse Street around the beginning of 1892 and two years later back to 15A Pall Mall, where it remained until 1913.

In 1915, the Registrar of Companies, having received no fees for two years, wrote to Colt’s head office in Hartford and received the following reply: ‘We closed our London office July 1, 1913. We are represented there by the London Armoury Co., 31 Bury Street, as distributors only, and we do not maintain a place of business in the United Kingdom. We therefore do not believe that we are liable for any tax’.

End of an era

So ended over six decades of a Colt presence in England. Although he had obviously hoped for a greater European venture, Sam would be pleased that his products are still appreciated and accepted on this side of the Atlantic, more so than many of his rivals of the day.