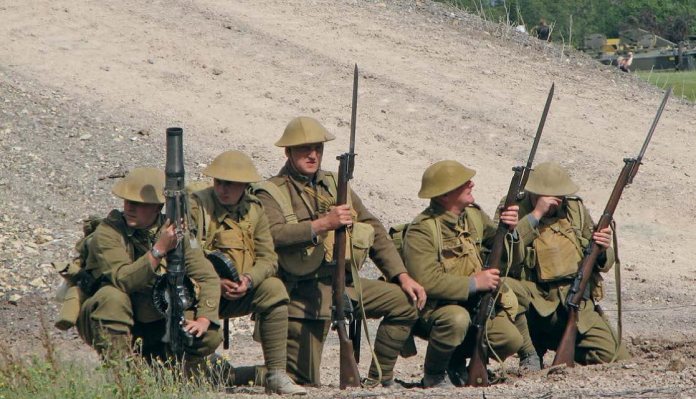 Once the first reliable, mechanical multi-shot weapons had been developed, such as the Gatling, Gardner and Nordenfeldt guns, the military wanted designs with greater range and firepower. John Moses Browning and Hiram Maxim each developed successful belt-fed machine guns with high rates of fire. Their ideas influenced weapon designers in Britain, France and Germany so that in 1914, the armies of these countries went to war with machine guns based on those weapons. Unfortunately, they all suffered by being heavyweight and whilst they could be transported, they were not manportable, meaning that once an attack was launched the infantry lost firepower support.

What was needed was a light machine gun which could be carried by one man to provide fire support to the infantry as they went into the attack. The French developed the ‘Chauchat’, weighing just over 20lbs but not it was not reliable, while the Germans used a few Madsen machine guns, a Danish design weighing 22-pounds, which, like the Chauchat, was a magazine-fed weapon. The British army adopted an American-designed weapon known as the Lewis Gun, which began to enter service in 1915. Fitted with an integral bipod and weighing 27lbs with an overall length of 26”, it fired the British army’s rifle calibre bullet of .303” (7.7mm) from a drum magazine mounted on the top of the weapon. The magazines had a capacity of either 47 or 97 rounds to allow a cyclic rate of fire of 450 rounds per minute, with a muzzle velocity of more than 2,400 FPS.

A complex weapon and not without its faults, the Lewis Gun, nevertheless, transformed infantry tactics in the maze of trenches that was the Western Front. The weapon had been designed in America by Samuel Maclean, who had enjoyed some success with his weapon designs including revolvers. It was when he teamed up with Colonel Isaac Newton Lewis, who made modifications to the design that interest began to be shown in the weapon. As well as improving the gun, Lewis also marketed it, which led to it being called by his name. In 1913 the Belgian army accepted the Lewis Gun for service and a factory was being prepared for the manufacture of the weapon when war broke out in 1914.

Production was moved to Britain where the Birmingham Smalls Arms factory produced the weapon for the Belgian and British armies. From the manufacturing point of view, six Lewis machine guns could be produced in the same time it took to produce one Vickers machine gun. The weapon design diverted some of the gasses produced by the bullets on firing and directed them to push a piston rod to the rear, which sent the bolt back to be returned by a reciprocating spring pushing the working parts forward. During the recoil phase, rounds were stripped from the top-mounted drum magazine and fed into the breech on the return movement. It was an automatic movement and would continue as long as the firer kept the trigger pulled.

A series of longitudinal fins ran the length of the barrel, which was contained within an outer sleeve to create a forced draught system to cool the weapon. The mechanism was delicate, the whole weapon had some 138 separate parts and was prone to stoppages due to the conditions in the trenches, plus the magazine could become dented leading to rounds being misfed. Good cleaning and maintenance solved most of the stoppages and it proved a useful and reliable weapon. Even the German army used captured versions of the Lewis Gun, reboring them to accept the standard 7.92mm calibre rifle round. When America entered the war in 1917, Savage Arms acquired factory premises in Pennsylvania where Lewis Guns were produced in the .30 calibre as used by the American army.

At the start of WWII, Britain found itself desperately short of weapons and almost 59,000 Lewis Guns were discovered in storage. They were hastily issued to Home Guard units and even some Regular units. The weapon had given good service in WWI and it would go on to be used in all theatres of war, from desert to jungle, between 1939 and 1945. It was also used at sea by both Royal Navy and Merchant Navy ships.

During WWII, BSA produced more than 145,000 Lewis Guns and by the time it was phased from service in the mid-1950s, it had been used by the armies or military force of over 50 different counties. In its service life of 40 years, the weapon was produced in a score of different versions and Marks to suit mounting in aircraft, vehicles and ships as well as infantry and armoured units.

Such a diverse history in a short time frame makes the Lewis Gun a historical weapon of significant interest to a wide range of enthusiasts, from collectors to re-enactors and even film buffs. It may come as a surprise to know that special effects people created the T-21 ‘Blaster’ rifle in the Star Wars franchise by converting Lewis Guns. Seriously, though, the Lewis Gun is of historical importance and collectors can create a display on its range of different versions and variants, from aircraft mounts to ‘double-mount’ naval versions. Types used by nations other than Britain opens up another area of interest. Include ancillary items and suddenly there are more possibilities for displays. In 1918, the cost of a Lewis Gun was £175, today a check on specialist websites shows that a good quality, legally deactivated example, dated 1914 costs £6,750. A deactivated Merchant Marine version, in very good condition, costs £5,995 and there are the aircraft-mounted versions, also.

Collectors can occasionally pick up the odd item associated with the Lewis Gun at collectors’ fairs, such as magazines, training manuals and posters or cleaning kits. It is not difficult to obtain inert examples of the ammunition because the weapon fired the standard rifle calibre of whichever country used it. Captured examples of weapons used by the Germans were termed the MG 137(e), firing either the .303 or 7.92mm calibre round. Examples which have been ‘sectionalized for training purposes are unusual, but make fascinating items in any collection.

The Lewis Gun is suitable for re-enactment groups depicting all theatres of both world wars and immediate post-war conflicts, because it remained in service until the mid-1950s, to cover the Korean War and the early days of the Malayan Emergency. Because of this wide range of scenarios, re-enactment can choose what type of Lewis Gun will best suit their display. For example, if it is a static display they might prefer a replica model from the range offered by the East Sussex-based company of Relics (www.relics. org.uk), such as the infantry pattern which is available for £420 and can cover many depictions. Like all the other types, it looks perfectly suitable and can be expanded with extra magazines, each costing £62.50. For something more unusual, Relics also offers the aircraft pattern for £510. Even more unusual is the SAS version at £450, to fit in with the North African theatre.

If a Lewis Gun is required for a full battle re-enactment complete with vehicles and lots of movement, then the Essex-based company of Military Muckabouts (www.military-muckabouts.webs. com) should be considered. The company makes replica gas firing guns for use in films and television productions, which are most realistic and their portfolio includes a wide range of weapons. Military Muckabouts are continuously adding to their list and one of the most recent additions is an all-metal, full-size Lewis Gun to provide full sound and visual effects. They can be used mounted on vehicles or by re-enactors recreating infantry attacks. The price is £895 and the effect is realistic in every sense and completely legal.

The Lewis Gun has a history comparable to many other more iconic weapons, such as the Bren gun or MG34, but offers more in the way of versatility because of the number of wars in which it served. It may be because it does not feature in war films as often as other machine guns, but collectors certainly see it differently and re-enactors know its value as well as what it can add to a display as an exhibit. For those who may still have doubts, reconsider it and you might come to change your mind about the Lewis Gun.