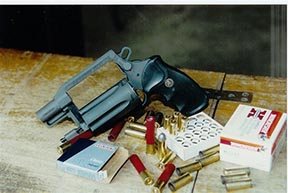 Over the years there have been some unusual inventions in firearms and related industries. Often as not they are one person’s idea of what a thing should be as opposed to what is a deal more practical. Other seek to get around mechanical problems; perceived or otherwise. Perhaps the classic example of this is the old Webley Fosberry – self-cocking revolver. The upper frame (barrel & cylinder) run in rails on the lower grip frame. As the gun fired the recoil moved the upper frame backwards, which indexed the cylinder and cocked the hammer for the next shot. One might say was this the solution to the problem that did not exist? As it was probably no less quick than using a standard .455 Webley revolver in double action mode anyway. But the Fosberry has passed into history and become an icon amongst classic shooters.

With that in mind I dug through my photo library and found equipment that was equally or even more unusual for your delight. I will at a later date do an ‘Oddballs II’ but I hope you enjoy what I have found in the archives…

The Charleton was a design said to hail from New Zealand at the beginning of WWII, which addressed the chronic lack of machine guns available to our forces. The base gun was the old 303 Short Magazine Lee Enfield (SMLE) bolt action rifle – not the sort of thing you would imagine an MG to be based on. However, the designer fitted an external, side-mounted gas/piston system that ended in a cam plate that as it cycled actuated the standard lift and pull rifle bolt. A return spring then dragged all this mass of metal back into battery to load and lock.

A true mechanical musket if ever there was one. All this external linkage bashing about needed some safety features, which included a pistol grip on the wrist of the butt and a steel hand guard. Likewise a face protector sat at the base of the tang to stop your head getting too close to the bolt. It would appear the design worked, though was somewhat limited by the 10 shot magazine and I recall that a larger capacity version was produced.

More up to date is the American Thunder Five revolver, chambered in 45 Long Colt, but with a cylinder long enough to accept a 2 ½” .410 shogun cartridge too. In fact the chamber was probably half as long again as the actual barrel.

The Thunder Five was big and all aluminium, apart from a slim rifled liner in the bore – doubtless there to give the 45 bullet some stabilisation. It came with Pachmayr rubber grips as standard and is one of the few revolvers to feature a safety catch. The idea was a home defence gun for the American market; where a compact handgun under your pillow at night loaded with a .410 birdshot cartridge would doubtless deter any burglar.

I shot an example with both 45 Long Colt ammo and .410 rifled slug too and it was most interesting. The Gun showed poor accuracy – suffice to say at 10-yards the groups produced were large and recoil was heavy. In fact it was probably more consistent with birdshot than ball or bullet…

This feature is not all about guns, so here’s a very clever crossbow of sorts that I happened upon in the mid 1980s. The Oakland AIGP was for the want of a better word a vertical, self-cocking bow. Designed by inventor Ivan Green, the frame or stock was made of high strength aluminium and hinged open to give the user a lever to cock the mechanism. Unusually the bow section moved rearwards on a metal bar to engage the string with the trigger. Then as the frame lever was repositioned the bow was forced forward to tension the limbs. As the frame shut this provided the mechanical lock to keep everything tight.

Unlike a conventional crossbow it had no arrow gutter; instead it was held at the knock and by a circular (finger) insert at the front. In effect the arrow was totally free of influence and this was proved by how it shot. At 50-yards you could expect 1-2” groups depending on your skill.

The AIGP could be used vertical or horizontal, for the former a low power compact Beeman scope was used and for the latter a flip-up aperture. Though it did feel a bit odd holding the pistol grip on the side to shoot it. Sadly the AIGP never got into production in the UK, but if it had I reckon it would have been very popular, as it was years ahead of its time

Less daft and more awesome was the Calico semi-auto rifle, which offered the final solution to onboard firepower. The design stems back to the 1970s and was offered in both .22 Long Rifle and 9mm Parabellum, I only tested the 22 version. The design was very space age with an M16-style front end and I suppose it could technically be called a Bullpup too, as the magazine was behind the pistol grip.

The 22 was a simple blow back semi auto mechanism with a centrally-mounted pistol grip and the choice of fixed or folding butt. What made it truly different was the magazine, which held 100 rounds in a linear drum. Though seemingly complicated the Calico magazine worked surprisingly well. The inside used a splined rotor that held the ammo nose to tail in 10 lines of 10 rounds. Feed was achieved by spring power and a cam track moulded into the inside wall of the magazine casing. A free follower ran in this track and moved the ammo down to be fed. In 9mm both 50 and 100 round drum were available; now that is a lot of Parabellum going down the range!

The people who made the Calico envisioned a whole family of weapons from pistols, to carbines to rifle-length versions. In the UK I actually saw a 9mm pistol version that was classed as a Section 1 firearm being used at a UKPSA Practical Pistol match. A rather exotic design in general that resulted in an unbalanced and rather awkward weapon. But if you wanted a lot of ammo on board the Calico was it.

Designed by John Moses Browning at Winchester’s request the 1887 was until the introduction of the Winchester 9410 three years ago the only lever action repeater ever made. Browning wanted to make a pump action instead, as Christopher Spencer had introduced such a design two years earlier. But the Winchester board said that their company was famous for lever action rifles so a shotgun of that style would be what was needed.

Unlike the pumps and autos we know today the 1887 showed a very short receiver, this was brought about by the breech block , which was a simple steel quadrant directly linked to the operation lever. So this rotated downwards, as opposed to pushing rearwards for more than the length of the fired round. The gun offered a magazine capacity of four, with the ability to have another cartridge on the carrier. This could be upped to six if the chamber was loaded too.

The 1887 sold very well, in fact much better than the Spencer or Bannerman pump actions of that period, and proved popular with lawmen and criminals in the USA up to the 1920s. However, it was reasonably short lived as in 1893 Winchester launched their Model 93 pump action, which itself was superseded by the improved Model 1897.

Both the Winchester Model 1887 lever and 1897 pump action shotguns are popular today with the Western Shooting Associations. So much so that a Chinese company now makes copies of both models for this market.

Now for all you knife collectors we have ‘The Solution’ – certainly to another design problem that didn’t exist. As to why would you want to combine a knife, hammer and axe in one packet? This design goes back to the early 1980s when the survival craze was in full swing here and in the USA.

This massive and unbalanced lump of steel consisted of a central/double ended section with a knife at one end and a small axe blade at the other. The knife offered a saw back, gut hook tip and doubled up as the shaft for the hinged axe handle. The axe was C–shaped with a cut out behind the edge and a large plastic handle/cover grip hinged in between the two edged functions. Above the back of the axe edge was a fixed, hollow steel handle with a heavy screw-off end cap.

In knife mode the swinging handle covered the axe edge and was retained by a sprung cross pin. This then allowed a standard grip if you wanted to cut with the blade. Conversely you could use the gut hook/saw back by grasping the hollow steel handle. If you wanted to chop you pulled out the cross pin and swung the handle over to cover the knife blade and voila – a chopper. Should you want to hammer anything then the steel tube with end cap was used.

The end result was an ill-balanced design that couldn’t do anything well. However, given the survival craze of the time they probably sold very well, as any form of multi-function outdoor tool seemed to do.

This item looks unusual, but it was effective, though it shows a rather distinctive design approach to what is probably one of the militaries most basic weapons - the sub machine gun. The Owen is Australian and as such could be considered as their Sten Gun. However…

Like all good SMGs the Owen is a blowback, relying on the weight of the bolt and return spring to keep the breech closed at the moment of firing. As can be seen it’s considerably different externally and shows some good if unusual design features. Most noticeable is the vertically placed magazine and bottom ejection. Though unusual when compared to the more common side and bottom feed systems reliability was excellent as was ease of magazine change.

Supplied with two pistol grips the point of balance was right in the middle and the barrel complete with compensator was easily removable. The bolt system was totally enclosed and actuated by a cocking lever set at the rear right of the receiver casing. The gun offered a selective fire capability (semi and full auto). Sights naturally had to be off set to the right to see past the magazine. In use the Owen is rated as one of the best SMGs ever produced. Troops fighting in Malaya said they preferred it to the Thompson, Sten and even Stirling guns.

The Owen soldiered on until the mid 1960 when the Australians replaced it with the X3 (F1), which took the same vertical magazine system and some other features and combined it in package that looks not unlike the British Stirling.

Well I hope that you have enjoyed this small selection of unusual guns and equipment. It goes to show, if nothing else, the ingenuity of the human mind in regards to design and function. I’ll keep digging around to see what else I can come up with.