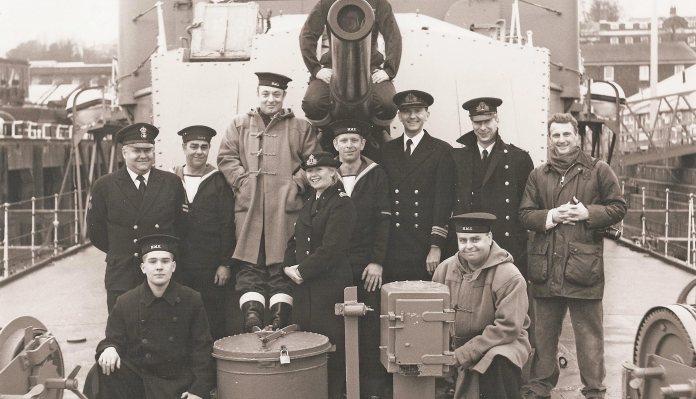 Some great war films have been produced over the years, such as ‘A Bridge Too Far’, ‘Saving Private Ryan’ and ‘The Longest Day’. These are set against a backdrop of factual events but others, such as ‘The Guns of Navarone’ and ‘Where Eagles Dare’, are works of pure fiction. These epics share one thing in common; they all have the action based on the ground. We must not forget there have been some very good films about war in the air such ‘The Dam Busters’, ‘One of Our Aircraft is Missing’ and ‘Memphis Belle’.

Filming productions based on historical events at sea brings all sorts of difficulties with them, just like their air force counterparts. Today, technology can recreate battleships and submarines using CGI, but in the 1950s, a time when some classic naval war films were made, things were very different. ‘Stand-in’ ships had to be used in place of the original vessels which took part in the naval engagements. Recreating these scenes can be seen as re-enactment events and is a reference that I have often used to draw similarities between the recreation and the actual event.

The attendant problems in filming historical naval epics begin with getting warships that resemble the actual vessels that took part in engagements, such as the ‘Battle of the River Plate’. Released in 1956, the film tells the story of the hunting down of the German ‘pocket battleship’ the Graf Spee in 1939. Some of the people involved gave their advice, but it was the warships, some of which had been involved in the action, that were used in the filming, with other vessels standing in for those no longer in service. It would be these ships that were the stars of the film.

For example, the Graf Spee, which had been sunk, was replaced by the USS Salem, while HMS Sheffield and HMS Jamaica stood in for HMS Ajax and HMS Exeter. HMNZS Achilles and HMS Cumberland took their own parts. For the dramatic big gun firing sequences, HMS Cumberland, which had served throughout the war, was used as well as standing in as the ‘stunt ship’, being rigged to recreate the explosions meant to be hits on other ships. The action at sea was filmed from the decks of HMS Battleaxe and the USS William R. Rush. Another ‘standin’ was the RFA Olna which took on the role of the Altmark and is filmed resupplying the Graf Spee (USS Salem).

The list of naval epics with dramatic action at sea includes productions such as ‘In Which We Serve’, ‘The Cruel Sea’, ‘We Dive at Dawn’ and ‘The Ship That Died of Shame’. Not all are based on real events, while others, such as ‘Above Us the Waves’, were inspired by wartime operations. However, all feature actual warships which were used in service and the footage of the ships underway makes for gripping viewing.

Released in 1957, ‘The Yangtze Incident’ tells the story of HMS Amethyst which was fired on and became cut off during the Chinese Civil War in 1949. The film has some fine action sequences using HMS Amethyst to re-enact her daring escape to freedom. Some great scenes of naval gunnery were filmed aboard HMS Magpie standing in for the Amethyst, whilst HMS Teazer stood in for both HMS Consort (D76) and HMS Concord. The action was filmed on the River Orwell and the River Stour where obsolete Royal Navy guns were mounted on carriages to represent artillery of the Chinese Army.

We all know this one

Perhaps the naval film which captured the full drama of a naval operation from beginning to end was the epic ‘Sink the Bismarck’, released in 1960. Apart from some annoying minor details, the film was critically acclaimed and unfolds to tell the story from all angles.

The production was made possible by the number of ships that stood in for those vessels which took part in the actual operation. This was made possible by the film’s producer, John Brabourne, who enlisted the assistance of his father-in-law, Lord Mountbatten, who as Chief of Defence Staff was able to obtain support from the Admiralty. Surely no film before or since has ever enjoyed such distinguished cooperation from high authority. One of the largest ships to be involved was HMS Vanguard, the last battleship armed with 15” guns to be built for the Royal Navy. She stood in variously as HMS Hood, HMS King George V, HMS Prince of Wales and even as the Bismarck for some on-board scenes.

The aircraft carrier HMS Victorious stood in for herself and HMS Ark Royal, with the flying sequences, showing the take-off of Fairey Swordfish armed with torpedoes, being filmed from HMS Centaur. Special effects were limited to very accurate large scale models of some ships, including the Bismarck, interwoven with wartime film footage. Other ships standing in were HMS Belfast as HMS Norfolk and some other ships, and HMS Cavalier as HMS Hogue for the night-time torpedo attack. Today the Belfast is moored on the River Thames in London as part of the IWM collection, whilst the Cavalier is preserved in Chatham Historic Dockyard in Kent. Three of the Swordfish are preserved as part of the Royal Naval Historic Flight in Yeovilton, Somerset.

There are many locations around the country with historical naval connections such as the Explosion Museum of Naval Firepower at Priddy’s Hard, Gosport in Hampshire. To find out more about this location and other naval museums such as Portsmouth Historic Docks and the collection at Hartlepool, go to the website www.nmrn.org.uk and follow the links to the sites you wish to visit. The Historic Dockyard at Chatham (www.thedockyard.co.uk) hosts reenactment events and collectors’ fairs, in addition to its historical exhibition and ships to walk on board. At the time of writing these sites are beginning to re-open, so check the events lists online for times. It is also worth remembering that some of the ships you next see in naval films such as the 1952 production ‘The Gift Horse’, starring Trevor Howard, have true history behind them and are the real stars of the film.