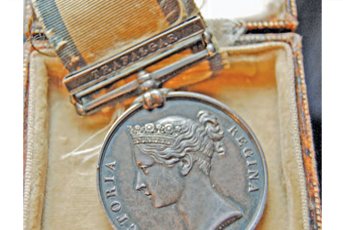 In July 1805, secretly leaving Milan and hurrying to Boulogne, Napoleon joined his ‘Grand Armee’, a large military force strategically positioned in camp and ready to invade Britain. Napoleon’s plans depended on Admiral Villeneuve bringing the French and Spanish from South Western Spain to the Channel in order for the invasion to take place. It wasn’t until October that Villeneuve left the port of Cadiz and began to steer his fleet to the Channel; a fleet superior in size to that of Britain’s. Encouraged that Nelson and the British fleet remained in England, he was to be proved very wrong, with the bulk of Nelson’s fleet carefully positioned well out to sea.

At 9am on 19th October, HMS Mars relayed that the Franco-Spanish fleet was on course for the Channel, and so at dawn two days later, on the 21st October, Nelson signalled his fleet to begin the attack. Nelson on HMS Victory told Hardy, his flag Captain, that he expected to take 20 of the enemy’s ships and despite being confident of a victory, he was equally convinced of his impending death in the battle. During the fight a musket shot hit Nelson, knocking him to the deck. He was carried below to the midshipmen’s berth, where he constantly asked after the progress of the battle. Eventually Hardy was able to tell him before he died that the Fleet had taken 15 of the enemy’s ships. Nelson knew he had won; and with his famous words “God and my country”, he passed away.

The romanticism and heroic victory is reflected in a lot featuring in the forthcoming Militaria sale on Saturday 20 July at TW Gaze auction rooms. Offered for sale is a rare and sought-after medal awarded for service in this famous battle: the Naval General Service Medal with Trafalgar clasp. This fascinating artefact awarded for possibly the most defining moment of Britain’s military history was awarded to Henry Eaton, an Ordinary Seaman of the Royal Navy.