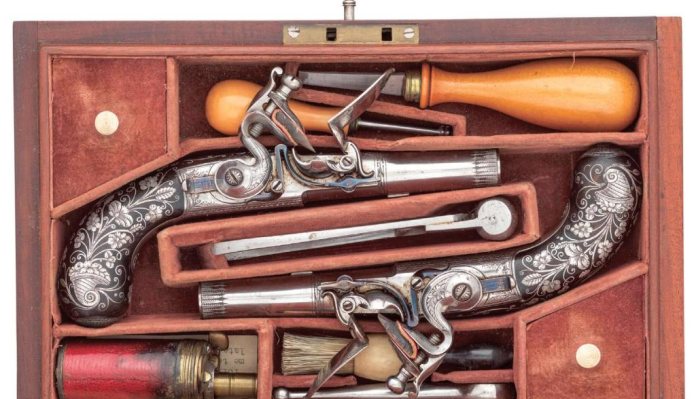 December saw another exceptional sale for Thomas De Mar. Following the sale, Auctioneer and Specialist-in-charge, Thomas commented: “We were delighted with the overall sale result, with 85% sold for the total mid-estimate. Quality, condition and provenance continue to be more significant than ever and this was evident in many of the top lots. It was pleasing to see global coverage in the Neolithic objects, an area which we have not touched upon before. The pre-sale exhibition and the auction itself were attended by a number of our regular clients as well as some new buyers, showing the continued development of this broad field. Our next sale will be held in June 2020.” thomasdelmar.com

A fine silver-gilt-mounted sword presented to Captain William Augustus Montagu of His Majesty’s frigate Cornwallis from the officers of the troops engaged with him in the assault and conquest of Amboyna, 29 February 1810, London, 1811, makers mark of Thomas Price, retailed by Rundell, Bridge and Rundell.

An extremely rare 33-bore flintlock breech-loading repeating magazine pistol on the Lorenzoni principle by H. W. Mortimer, London, gunmaker to His Majesty, circa 1790.

A silver decorated viking spearhead, circa 1100.