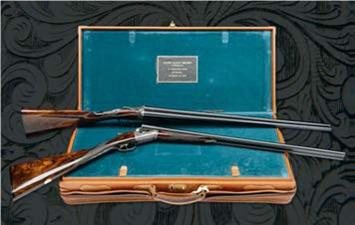 With the looming threat of a global health crisis, and governments across the planet instructing their populations to isolate themselves and prepare for extended periods of lockdown, it was with some trepidation that Holts prepared for their second auction to be held at their Norfolk premises. Their first to be held over two days. With over 700 Lots on offer ranging from modern sporting guns and rifles, fine shooting accessories, obsolete arms, and flintlocks, to percussion guns, edged weapons and militaria there was plenty to choose from in Holts’ opening auction of the Twenties.

Whilst attendance was unsurprisingly down in the Auction Rooms, alternative methods of bidding, such as telephone and live internet bidding, were in high demand. With Holts covering the standard 5% online bidding fee charged by Invaluable and the Saleroom, socially distant bidding was the order of the day.

Day One kicked off with Holts’ traditional “morning session”, the antique section of the auction. Highlights included a rare Mortimer 16-bore sporting gun with both flintlock and percussion locks (Lot 448). Formerly part of the W. Keith Neal collection, this sold for a strong hammer price of £11,000 against its starting estimate of £8000. Another Lot formerly part of the W. Keith Neal collection was a fine Manton 15-bore flintlock single-barrelled sporting gun (Lot 448), which shot past its guide of £4000-6000 to hammer down at £9000. Antique arms, edged weapons and obsolete calibre arms continue to fetch strong results through Holts auctions, and the market remains buoyant and demand high for these items.

Day Two of Holts March Auction continued under worsening lockdown conditions, and whilst the doors were closed to the public, the online platforms took up the demand and the Rooms were a hive of digital activity. A rare pair of Boss sidelever 12-bores (Lot 1378) sold for a hammer price of £26,000, and there was a strong demand for double rifles with 15 Lots selling for a combined total of almost £100,000.

Perhaps the star Lot of the day, a fine and rare pair of Purdey hammer ejector shotguns made for the Paris exhibition in 1899 (Lot 1355) sold for an impressive £24,000. There was a good showing for classic English sidelocks in the face of proposed voluntary lead restrictions, which indicates that these wonderful works of mechanical art still have a strong following, and a good lease of life left in them.

Holts’ March Auction results show an impressive 77% of all Lots sold, achieving a total result of over £1,000,000. A further £150,000 through Holts’ after-sale platforms puts the sale total at over £1.1 million. With the delayed Sealed Bid to look forward to in June, Holts will be looking to build on this result with their next auction of fine modern & antique arms in September. holtsauctioneers.co.uk