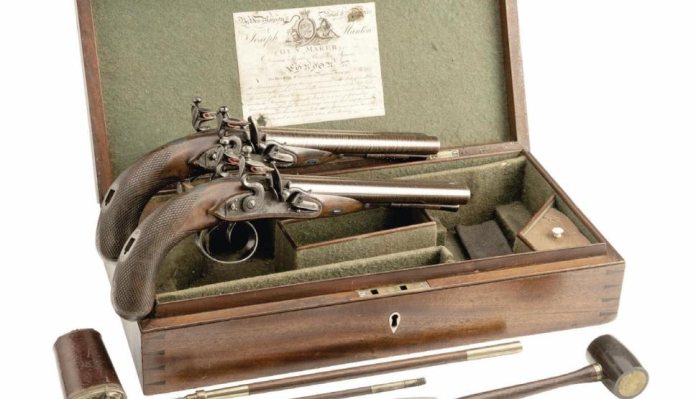 Holts continued with their new viewing format at the Army Reserve Centre, Adam & Eve Mews, Kensington, London for their June sale. A viewing and drinks party was held on Friday followed by weekend viewing and Monday viewing prior to the sale on Tuesday.

The UK continued to be the biggest buying market accounting for well over half the sales followed by continental Europe and the USA. Over £720,000 was taken in the main sale followed by over £250,000 in the sealed bid making for a total of just under £1,000,000. These figures do not take into account after sales.

The highest price achieved was by lot 1300, £40,000 for a pair of 12-bore over and under Purdey sidelock ejectors engraved by Danny O’Brien. Coincidentally, the next lot, lot 1301 achieved the second highest price, a pair of Holland & Holland 12-bore triggerplate Sporting Model over and under guns with sideplates. Built in 1995, this pair made £30,000.

An interesting lot that generated much interest was lot 1320, a trio of 12-bore sidelock ejectors by Purdey, built in 1930, contained in their original case. These guns were very original and it is rare to see a trio of guns that have not had one or more guns re-stocked or re-barrelled. They made £17,000.

In the antique section of the sale, Lot 460 was a spectacular pair of Joseph Manton double- barrelled flintlock carriage pistols. They were in fine original condition, in their original case and this combination of condition and famous name meant that the carriage galloped on and they fetched £21,000, well above their estimate. A nice little addendum to these pistols was that the pair were reunited relatively recently.