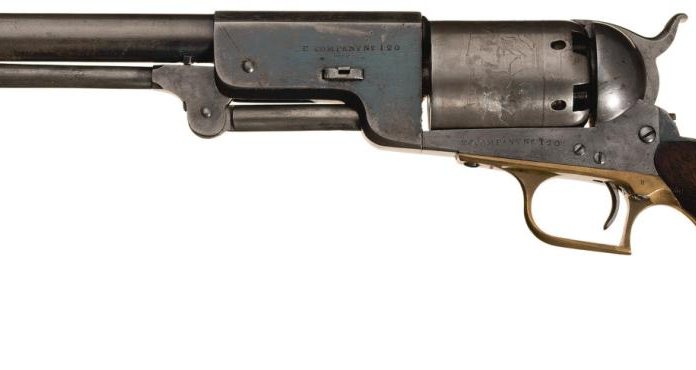 What an incredibly special weekend in September. The weather was nearflawless, the food was delicious, but what will stick with us the longest will be the excitement in collectors’ eyes when they talked about the items in the 2019 September Premier Auction. People’s passions were on fire and it showed this past weekend: we saw near-record website traffic, over three million video views, bids from all 50 states and 20 countries outside the U.S., and RIAC Live doubled the capacity of the auction hall all weekend long! it also marks the fourth occasion in our last five auctions we have sold a collector firearm for over $1 million dollars. To wit, the sale realised $18 million in a spectacular summer sale full of surprises.

To say that the auction began with a bang would be an understatement. It started with an earthquake. Lot 17 carried the Winchester 1876 Centennial revolver present at the 1876 Centennial Exposition, the U.S. Navy Trials, and which also spawned the gentlemen’s agreement between Colt and Winchester. This giant of firearms history brought $431,250 before people’s morning coffee had cooled. In lot 62 was the flagship of the sale: the last martial Colt Walker, E Company 120. In addition to its immense Colt significance, it provided an extremely high condition example, especially for a military issued model. This museum-worthy piece achieved $1,035,000 followed by the applause of all in attendance. Other highlights of day one include the 1880 manufactured, finest known Colt Cavalry Model single action in lot 124 which saw $402,000, Georg Luger’s personal “Baby” Luger prototype pistol in lot 456 that realised $172,000, and a martial issued Henry rifle documented to the 3rd U.S. Veteran Volunteer Infantry in lot 13 that found $92,000.

Saturday was not immune to similar applause-inducing results, nor a lack of expediency to achieve them. The 15th lot of the day, lot 1015, contained the highart, historic Winchester 1895 masterpiece by John Ulrich: a deluxe, takedown rifle inscribed to famed Western author and “Father of Modern Big Game Fishing” Zane Grey. This artisan, investment-grade firearm attracted more than its fair share of attention in the Preview Hall, and the result was a final price of $345,000. Less than 100 lots later, the supremely rare U.S. Army Colt 1877 “Bulldog” Gatling gun in lot 1105 crossed the podium to the tune of $316,250. Within the next hundred lots were two of the day’s top sellers: lot 1193 with the finest known, martially inspected Colt 1860 Army, and lot 1200 with its massive and rare Confederate John Clarke & Co. 12-pound field howitzer. The Colt commanded an extremely respectable $184,000, but the cannon would make its presence strongly felt with a booming $287,500 realised price.

Are you sensing a theme yet? Then it should come as no surprise when we tell you that the 10th lot early on the final day of auction, brought to market a John Ulrich signed, factory engraved, and gold inlaid Winchester 1873, the artistry of which was so fine and masterfully executed that it took home the Grand Prix at the 1889 Exposition Universelle in Paris – 130 years ago to the month. The medal and award still by its side in lot 3010, it achieved $138,000. Shortly thereafter in lot 3187, was the SECOND Colt Walker offered in the sale, this one a C Company, No. 81. Colt collectors know this is of particular significance as C Company was Walker’s own company in the U.S. Mounted Rifle Regiment. There was once a time when RIAC would go years without seeing a Colt Walker, so to offer two in a single sale is a clear indicator of our growth and reach. This particular example exceeded its $125K high estimate en route to a $149,500 payday. Last but certainly not least on Sunday was the massive, gold inlaid and engraved Rodda 4-bore double rifle owned and used by John Ross, author of Unintended Consequences. This fine big bore rifle in lot 3428 was used by Ross to hunt numerous African species. The power, provenance, artistry, and the quality of such a gun all contributed to a $126,500 realised price.

September is always a fun auction: our Annual Barbecue is held on Preview Day, the weather is usually perfect, and lots of folks feel like traveling as summer begins to fade into fall. This September’s auction was not only special for its success, but its exuberance. Collectors were excited to be here, see the guns, talk about them, and share that love with others. Passion so clearly visible makes doing what we do worth every minute detail and extra hour.

The turnaround until our December Premier Firearms Auction is short, so stay tuned to our social media channels and subscribe to our weekly email for updates on what promises to be an absolute powerhouse of a year-end finale. rockislandauction.com

Rare rifle from purdey to star in auction

Gavin Gardiner to offer a rare Purdey Rifle, built for the Prince Of Wales’ Indian Tour of 1875/6 in December sale…

The rifle was presented to the Nizam of the Decan, the ruler of the state of Hydrabad, in South Central India, by the Prince of Wales on the tour, and is engraved on the rib “H.H. The Nizam of the Decan from H.R.H. The Prince of Wales, KG, GCSI 1876”. It carries a gold oval engraved with the Royal crest and the Order of the Star of India. It is in its original makers case with the Nizam’s name on the lid and carries an estimate of £10,000 - 15,000.

As Gavin Gardiner explains: “In October 1875, Albert Edward Prince of Wales, the eldest son of Queen Victoria, embarked on an extensive tour of the Indian subcontinent. Here the Prince visited more than 21 towns and cities before returning to England in May 1876.”

He continues: “British monarchs and members of the Royal Family undertook lengthy tours to strengthen ties with other countries, and also to learn more about the culture and history of those regions. The Prince of Wales’ tour of India was envisaged as a way of forging diplomatic links between the Indian rulers and the British Crown. The Prince exchanged gifts with each ruler he met and a number of rifles were ordered from Purdey as well as Alexander Henry to be given as gifts during the tour. Purdey’s records indicate that two rifles were presented to the Nizam, the other is now in the collection of the Royal Armouries.”

Elsewhere the sale includes guns and rifles by all of the major makers and includes pairs by Purdey, Holland & Holland and Henry Atkin.

The sale, which comprises over 200 lots of fine sporting guns and rifles, will also include a strong section of accessories and more curious items – which could make wonderful Christmas gifts.