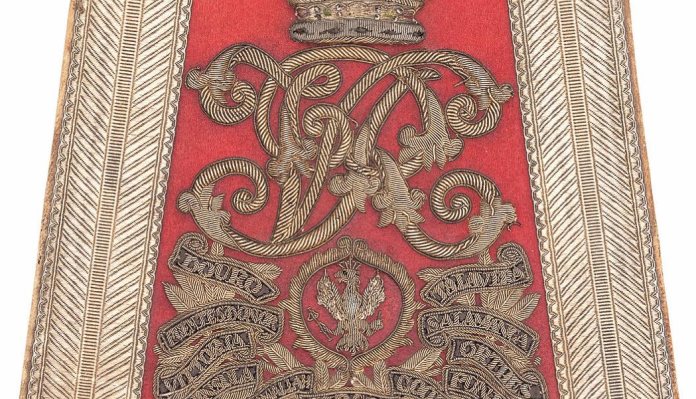 Internet bidders proved very strong in this sale with more than 40% of lots going to buyers online. We start the auction with a Victorian officer’s full dress embroidered sabretache of the 14th (King’s) Hussars, scarlet cloth, gilt lace with white stripe border, embroidered crown over VR, regimental badge and twelve battle honours ‘Peninsula’ to ‘Central India’. It was in very good condition and sold to an internet bidder for £1500.

Here we have a most attractive officer’s full dress embroidered pouch, circa 1860, of the East Lothian Yeomanry Cavalry, of blue velvet with silver lace border embroidered crown and ELYC monogram, wooden block inside drilled for five cartridges, with gilt suspension loops. It was in good condition and went to an Internet bidder for £575.

It can be very interesting how prices are affected by trends. One year something is in fashion and the next year it is out and the prices drop. Obviously there are many variables, but sometimes this can happen from one sale to the next. Many auctioneers have not seen good results for pre-war and WWII German items over the last few months, however in this auction we saw prices that were very strong.

Here we show a Third Reich 2nd pattern Luftwaffe officer’s dagger, by Puma, with pale orange grip and portepee, in its sheath with hanging straps. There was slight oxidation to hilt and sheath and it sold to an internet bidder for £480.

This Third Reich Luftwaffe Paratrooper’s badge, by C E Juncker, Berlin, with white metal wreath, gilt brass eagle, and round pin (Beadle 222) was in good condition and went to a bidder in the room for £510.

The same buyer also bought this next item, a Third Reich Paratrooper’s badge, by G H Osang, Dresden, with gilt eagle and oxidised silver wreath, the hook and hinge cast in one with the wreath. It was in very good condition in its original carton, the lid printed ‘Luftwaffe Fallschirmschutzen- Abzeichen’ (the carton slightly battered). This and the next three items had been in the possession of the vendor for 65-years. They were given to him by an ex-serviceman who reputedly ‘liberated’ them from the factory. It went to a room bidder for £540.

Here we have a scarce Third Reich Glider Pilot’s badge, unmarked, with ball hinge to the pin (Beadle 245). The eagle appears to have been reattached. Together with a large silvered alloy Luftwaffe breast eagle with pin fitting, probably for tropical uniform. They went to an internet bidder for £460.

A Third Reich Luftwaffe Bomber clasp, by R.S.&S (Richard Sieper & Sohn, Ludenscheid), gilt with black bomb (Beadle 293). The gilt was a little dirty and it came in its carton with stone effect paper covering. The previous room bidder bought it for £410.

A Third Reich Luftwaffe Night Fighter clasp, by R.K. (R Karnath), with silver leaves and black wreath. The back was slightly oxidised and it came in its carton with stone effect paper covering (the lid missing). Beadle does not list any Luftwaffe clasps by this maker. It was bought by the same bidder in the room for £580.

Finally for the Third Reich section of the sale we have this scarce SS peaked service cap, of black felt with leather strap, plain black buttons and silvered insignia, the fibre peak bearing SS RZM mark, the lining with gold SS symbol in a circle and stamped with black ‘T.Sta’ over ‘K`.H.St’ in a rectangle. It went to an internet bidder for £1500.

Moving back a generation and also to the edged weapon section of the sale we have this Imperial German artillery officer’s sword. The plated pipe backed blade 32½-inches long, double edged at the point, by Weyersberg, Kirschbaum Solingen, etched with crowned Royal Arms and supporters on one side and crowned FR cypher in wreath on the other. The black steel scabbard had been repainted but the blade was very good and it sold on the internet for £600.

A WWI period RNVR officer’s presentation sword. The almost straight fullered blade 31½-inches long, by Wilkinson, no.44684 (for 1914) on the backstrap, with retailer’s name ‘Gieve, Matthews & Seagrove Ltd’ on the opposite side to Wilkinson at the forte, etched with Royal Arms and fouled anchor with RNVR on one side and on the other ‘Presented to Lieutenant William Robert Dann, RNVR, Officer Commanding RNVR Cadet Corps and Lads Naval Brigade, from the Officers and Lads, Past and Present, as a Token of Their Great Esteem and Regard for the Outstanding Voluntary Work Done during a Period of Six Years’. The blade was mint but most of the gilt on the hilt was rubbed. The hammer fell at £410.

Just when the sword became obsolete as a true weapon, the 1908 pattern cavalry troopers sword became the last sword issued to the cavalry of the British Army. After hundreds of years, it was ironically also regarded as the best thrusting cavalry sword ever designed. Its straight fullered blade was 35-inches long, with various stamps at the forte, steel bowl guard with reinforce at forte and reinforced edges, various stamps on back including date ‘5.13’, ‘1 RR’ and ‘31 6’, plain pommel, shaped and chequered composition grip, in its steel scabbard with opposing rings and brown leather case (for a horse shoe) stamped with broad arrow and ‘66’. It was a clean example and made £330.

Now we move to firearms with this good 16-bore percussion holster pistol by Lacy & Co. The nine-inch barrel with London proofs and later Birmingham proofs, the flat signed lock of flintlock form with double line borders to plate and hammer, the stock having regulation military pattern brass mounts, and with stirrup ramrod. In excellent condition, the barrel retained most original dark browned finish, the lock with traces of colour hardening. Note: Lacy & Co made weapons for the Bank of England Guard. It went for £430.

Next is a scarce six shot 10.6mm German M/83 Officer’s model single action ordnance revolver, number 2606, made by ‘V.G.S *C.G.H Suhl’. With chequered wood grips and lanyard ring. It was in generally clean condition and made a healthy £650.

Finally, just days before the new changes to deactivated firearms come into being we have this de-activated composite 9mm P08 Luger semi automatic pistol, number 4773, the four-inch barrel and action bearing pre-war German proofs, the toggle marked ‘S/42’, with brown bakelite grips. There were some patches of pitting and surface rust and the Certificate of Deactivation was dated 27/01/97. It went for £400.

The Next Few Sales Are: