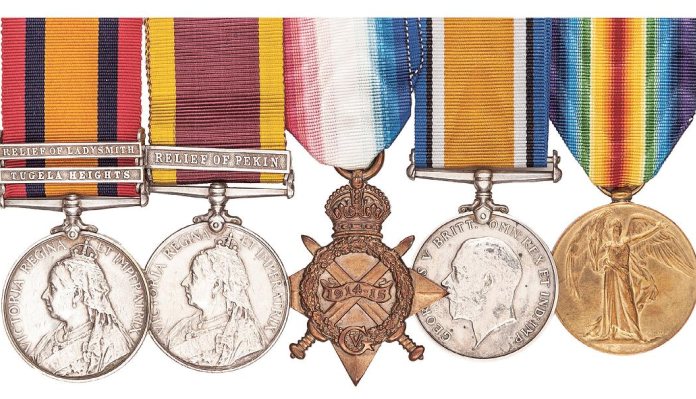 A WWII British Airborne Troops steel helmet, with foam lining and leather chinstrap and pad, the sweatband marked ‘BMB 1943 size 7-3/8’. Apparently in unissued condition but with a small chip to the skull’s textured finish. It made £650.

A post 1902 gilt Gentleman at Arms helmet of Captain E.B. Towse, VC, CBE, KCVO, the skull ornamented overall with scrolled vines, crowned helmet plate bearing Royal Arms in an oval Garter on cut silver plated star, all within an oak wreath, velvet backed foliate chinscales, lion’s head ear bosses, acanthus top mount (plume missing), leather and silk lining with owner’s name; with full details of Capt Towse (1864-1948) who was awarded the VC for two actions in the Boer War, in the second of which he lost his sight; he was admitted to the Gentlemen at Arms in 1903 and served with them until 1939. It sold for an impressive £4500.

Moving on to edged weapons, we have a 1786 pattern infantry officer’s sword, single edge fullered blade 32-inches long, marked ‘J J Runkel, Solingen’ on the backstrap, and etched with crowned GR cypher, royal arms, stylised pineapple and foliage, blued and gilt for one third length, brass stirrup hilt, retaining a little original gilt, the ebony grip with central band engraved on the outer side with crowned ‘LLV’ and the inner side with owner’s initials ‘TP’, in its brass mounted leather scabbard (repaired), the locket engraved ‘Bennett, Sword Cutler to the Prince of Wales, 67 Royal Exchange’. The blade retaining around 75% original blueing and gilding and polish. It sold for £675.

A Japanese naval officer’s sword katana, with heavy polished blade 25½-inches long, regulation mounts with floral decoration, double suspension ashi and lace sword knot. Saya split on one side. It sold for £750. On to firearms with this Irish 18-bore flintlock duelling pistol by Wallace of Dublin, circa 1785, the 11-inch octagonal sighted barrel with London type and maker’s proofs, and engraved ‘Wallace Dublin’ in panels, the signed flat stepped lock with swan neck cock, raised pan and roller on frizzen spring, and with floral engraved decoration. The oval silver escutcheon engraved with angel crest, and vacant silver escutcheon ‘butt cap’. It was generally in good condition but the metalwork had lightly pitted patina, the forend was fractured and repaired and the ramrod a replacement. It made £875.

Now we move on to American firearms and start with this ‘old spec’ de-activated US .45-inch M3 ‘grease gun’ submachine gun, number 0018685, with retracting wire butt, original oil bottle, magazine and webbing sling. It was in good condition and the certificate of deactivation was dated Sept 1994. The hammer fell at £650.

A 40-60 Winchester Model 1876 full tube magazine underlever rifle, 48½-inches overall, the 28-inch round barrel with address and King’s Improved Patent dates, number 45848 (1884), with brass loading port engraved with the calibre. The action needed attention and there was slight wear overall with dark patina to the metalwork, the rearsight removed and replaced with folding peep sight on frame tang. It still sold for £1400.

Moving on to handguns we have this 6-shot .36-inch Colt Model 1851 Navy percussion revolver, number 23494 (for 1853) on all parts, with New York City address, naval scene on cylinder, traces of silver plating on trigger guard and backstrap, and varnished walnut grips. It had a dark patina, the barrel lightly pitted overall, the cylinder scene was a little faint with a light score mark. It went for £1100.

A 6-shot .44-inch Colt Model 1860 Army percussion revolver, number 7933 (1860) on most major parts (the cylinder numbered 8804), with New York address. It was worn and lightly pitted overall, the barrel wedge replaced but the original, which is numbered to the gun, was still present. It sold for £725.

A 6-shot .44-inch Colt Model 1860 Army percussion revolver, number 22894 (1861) on all parts, with New York US America address and traces of inspector’s mark on butt. It had an older refinish with colour hardened frame and patchy blued barrel and cylinder (address worn and there was no trace of the cylinder scene, the serial number on the cylinder was just visible. The hammer fell at £1250.

A 6-shot .44-inch Colt Third Model Hartford Dragoon percussion revolver, number 16196 (1856) on all parts, the 7½-inch barrel with New York City address, the cylinder with the faintest traces of scene. It was worn overall with dark patina, rammer pivot screw missing, grips had been drilled and plugged. After much bidding it finally went for £2150.

Last of all we have this 6-shot .44-inch centre-fire ‘Smith & Wesson 3rd Model Russian’ single action revolver, by Ludwig Loewe Co of Berlin, number 46618, the 6½-inch barrel with Cyrillic Ludwig Loewe markings, serial number, and Russian eagle on the top flat, the frame dated 1874, with plain walnut grips and lanyard ring. The action required slight attention, it was slightly worn and had been professionally reblacked overall. After the Smith & Wesson Russian contract terminated Ludwig Loewe & Co took over, producing exact copies of the S&W Model 3 Russian revolver. It sold for £1300.

Refering back to the medal group, Leonard Lock, born 16th January 1880, joined the Royal Navy on his 18th birthday and from November 1898 to October 1900 served aboard HMS Terrible. During this period his ship saw service in South Africa where a Naval Brigade formed from Blue Jackets from Terrible and Powerful fought to relieve the siege of Ladysmith using artillery taken over rough terrain on adapted mountings (an event which gave rise to the Royal Navy Field Gun Competition so popular at events such as The Royal Tournament). After the 119-day siege was lifted Queen Victoria sent a telegram ‘Pray express to the Naval Brigade my deep appreciation of the valuable service they have rendered with their guns’. Following service in the Second Boer War HMS Terrible was dispatched to the China station to take part in the Boxer Rebellion. She arrived in June 1900 with three hundred of the 2nd Royal Welsh Fusiliers and forty Royal Engineers. Again her artillery saw service with four of her 12-pounder quick firing guns successfully being used in the action at Tientsin in July 1900. Lock’s service with the Royal Navy ended in 1920.