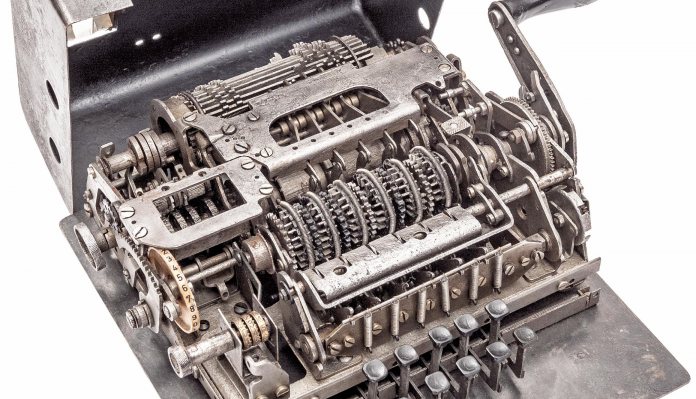 We start the report for this sale not with medals, as we normally do, but with a very rare device that was intended to supersede the Enigma encoding machine, an extremely rare WWII German Schluesselgeraet SG-41Z encrypting machine, with operating handle and metal cover. It appeared to have been recovered from underwater, cleaned, and partially restored to exhibition standard. Small items, such as screws and springs, had been replaced. The original metal base with the carrying handle was missing, and had been replaced with a flat metal base for display purposes. There was considerable interest from private collectors and museums around the world and it finally sold to a telephone bidder for £3100.

Notes on the encoding machine: the SG 41 was intended to supersede the Enigma machine. The development began in 1941 at the Warderwerke typewriter company in Chemnitz. Once in production, Hitler’s cryptographers wanted to replace the Enigma en-masse, but by this time there were apparently tens of thousands of them in service. In 1944 the German Supreme Command ordered 10,000 of the SG-41 (11,000 according to some sources) and 2000 of the SF-41Z, of which the one on offer is an example.

The SG-41Z was produced for the Luftwaffe weather service and differed from the SG-41 in having a 10 digit keyboard instead of the 26 letter keyboard of the SG-41.

Apparently some machines were dumped in the sea to prevent them falling into the hands of the Allies, several others in a freshwater lake from which they were recently recovered, and one was retrieved from the wreck of a sunken U-boat. It is believed that there are only about 10 examples in existence worldwide, although it is not clear whether this refers to both types or just the SG-41Z; in any event it is an extremely rare item.

Continuing on the German theme, we have this Third Reich Knights Cross of the Iron Cross, stamped with ‘800’ mark below the suspension ring and on the ribbon loop. It was contained in its fitted case and sold for £525. This good Third Reich German Cross in gold was the light version (43g), with four hollow rivets, the pin stamped ‘20’ on the underside. It was in excellent condition in its case and it went for £1150.

Headgear is always highly sought after and here we show a German Police General’s peaked cap, green with brown band and gold bullion piping and chinstrap, gold-anodised aluminium police eagle badge and national cockade, celluloid label of ‘Offizier Kleiderkasse, Berlin, Erel Sonderklasse’ and gold-stamped on sweatband ‘Erel Stirnschutz D.R.G.M’. It was in good condition and sold to a bidder in the room for £650.

A German National Forestry Service Senior Forester’s cutlass, the blade etched with scenes of a hunter shooting deer, dogs attacking wild boar and game birds, with early type Eickhorn mark, the brass hilt with ivorine grips. It came with its brassmounted leather sheath, the chape embossed with game dog and dead game, the locket impressed with oak leaf wreath around the frog stud, and engraved ‘Eduard Rose 5/1. Bernd Veen November 1931’. It was bought by an internet bidder against the room for £1350.

Now we move on to badges with this scarce enamelled gilt cap badge of the 25th Battalion (Frontiersmen) The Royal Fusiliers. It was in excellent condition and the hammer fell at £210. These two officer’s bronze lapel badges of the 25th County of London (Cyclist) Battalion, one with solid wheel and the other with voided wheel, made £150.

A good, scarce other rank’s cap badge of the 11th (Lonsdale) Battalion The Border Regt, with maker’s tablet of J R Gaunt, London. It sold for £240.

Another rank’s bi-metal cap badge of the Public Works Battalion The Middlesex Regt. It went for £260.

Moving on to antique firearms with this 6-shot .44 inch Colt Model 1860 Army percussion revolver, number 51007, on all parts (for 1862), with New York address on the barrel and naval scene on the cylinder (faint). It was London proved and had the retailer’s name ‘E M Reilly & Co, New Oxford St, London’ engraved on the backstrap. The frame was cut for a shoulder stock and there were faint traces of original blueing. The bore was not badly pitted and the exterior was modestly good. It sold for £1650.

A 6-shot .44 inch Starr Arms Co double action Army percussion revolver, number 1773, marked ‘Starr Arms Co New York’ on the right side of the frame, and ‘Starrs Patent Jan 15 1856’ on the left. The walnut grip with carved owner’s initials but no trace of inspector’s initials. Slightly worn overall, it still made £600. Finally we show this French 14 bore Model An XIII flintlock pistol, 13½ inches overall, with eight inch barrel, the lock engraved ‘Mre.—mp de St etienne’, halfstocked, the butt stamped ‘—.B. 1811’, with regulation brass and steel mounts. The action was not working, the ramrod was missing and the barrel pitted. It nevertheless sold for £575.

A recent analysis of the sporting gun market by Bonhams, one of the major players in this field, shows that the cult of celebrity has reached the gun world as guns with VIP owners achieve significantly higher prices.

Patrick Hawes, Head of Sporting Guns at Bonhams, who holds world records for a variety of weapons sold, says: “Once you have factored in the key aspects of gun buying at auction – quality, condition, rarity – you then find that it’s the weapon’s previous owners that add lustre to its provenance and price. For example anything previously owned by an Indian Maharajah or one of the British Royal family or well-known professional hunters will have an automatic supplement in perceived value and as often as not a few zeroes added to the price when sold.”

Born in Scotland, Sutherland emigrated to Cape Town in 1896. He hunted extensively in Mozambique, Tanzania, Uganda, the Belgian Congo and Malawi, and it is estimated that he shot a total of 1200 bull elephants alone in his career. Sutherland is thought by many to be one of the most famous elephant hunters of his time, and his book, The Adventures of an Elephant Hunter, published in 1912, has come to be regarded as one of the best elephant hunting titles ever, rivalling Walter Bell’s publications.

Another good example of a VIP gun is evident in the pair of shotguns once owned by Colonel William Stirling, one of the founders of the modern SAS, which were estimated to sell for £18,000 to £25,000 but in fact sold for £43,000. They are described as a pair of 12 bore self-opening sidelock ejector guns by J. Purdey & Sons built for Colonel W. Stirling. The makers have kindly confirmed that the guns were completed in 1949 for Colonel W. Stirling, and were rebarrelled by the makers in 1975. They have remained in the same family since new.

Lieutenant-Colonel William Joseph Stirling of Keir (1911- 1983) was the eldest son of Brigadier General Archibald Stirling of Kier, and was educated at Ampleforth College and Trinity College, Cambridge, graduating in 1932. He joined the Scots Guards, and during the Second World War commanded 62 Commando before forming 2 Special Air Service in May 1943 in Philippeville, Algeria, four months after the capture of his brother David in Tunisia. 2 SAS saw service in both Sicily and Italy before returning to Britain in 1944, where the two SAS regiments were joined with two French and one Belgian unit to form the SAS Brigade of the Army Air Corps which was then deployed during the Normandy invasion, working behind the lines up until the end of the war, when they were disbanded. Stirling later became Honorary Colonel of the Scots Guards.

A new best quality gun by Purdey, Holland and Holland or Boss could set you back £100,000 or more today, so it is worth looking for a second hand gun at auction, and Bonhams twice yearly sales in Knightsbridge always offers a good selection. At these sales a good quality double-barrelled shotgun can be bought for a fraction of this.

Proof of the interest in these sales is seen by the record prices achieved over the past decade. For example:
A fine pair of Kelly engraved 12 bore single trigger self- opening sidelock ejector guns by J. Purdey & Son sold for £79,000.

Bonhams next sale of Sporting Guns takes place on December 2nd in the Knightsbridge saleroom. The Sporting Gun department at has grown significantly in recent years to become one of the global leaders in this specialist field.

The sales, held three times a year at the company’s Montpelier Street salerooms include a fine and varied selection of best quality British and European shotguns and rifles – including the best makers such as Holland & Holland, Purdey, Boss, Woodward, Lebeau-Courally, Francotte, Bosis and numerous others. A variety of accessories including gun cases, cartridgemagazines, cartridge display boards and books are also included in these sales. The market in this specialist area remains very buoyant and record prices have been frequently achieved in recent years.

There are a number of Valuation Days in which you will receive a free estimate on the value of your gun.