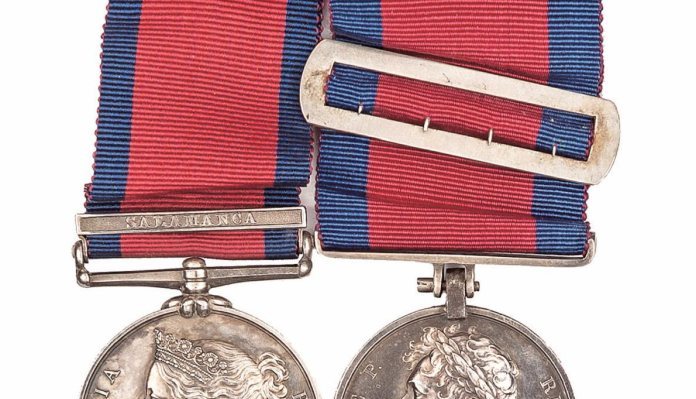 In 2005 Wallis & Wallis held a 190th anniversary Trafalgar and Nelson auction. At that time many of the private consignors to the sale mentioned that they also had fine and interesting objects related to Waterloo.

Those 10 years seem to have hurtled past at a speed that none of us had expected and we now find ourselves reporting on the superb results from the Waterloo 200th anniversary commemorative auction.

We start the report on the Waterloo Auction with medals and this Naval General Service 1793-1840, with one clasp Boat Service 4 Dec 1811 (William Green). It was in very fine condition and sold for £4500. Note: Roll confirms William Green as an Ordinary Seaman aboard HMS Sultan, the clasp was awarded for the capture of ‘Languedoc’ a French brig, by boats from HMS Sultan under Lieutenants Anderson and Woodcock, on the N.E. Coast of Corsica.

Another Naval General Service 1793-1840, with one clasp Trafalgar (James Brown), in very fine condition, sold for £3700. Note: There are two James Brown medals on the roll for Trafalgar: 1) AB aboard HMS Revenge. 2) Pte RM, HMS Swiftsure.

Next we have a group of two, Military General Service medal 1793-1814, with one clasp Salamanca; and Waterloo medal 1815 (Lieut. Henry Quill, 32nd Regiment Foot). They were in good to very fine condition or better and the Waterloo medal suspension ring had been replaced by a straight bar. They sold for £3500. Note: National Archive records show: ‘Age at first appointment 25 Years, March 1809 Ensign 32 Foot by recommendation of General Obilbie Colonel of the 32nd Foot. £70 pension awarded in respect of ‘In the trenches before Burgos in Spain, loss of 1 eye’ and £70 ‘at Quatre Bras in Flanders June 1815 a severe wound of the lungs’.

This pair of medals was sold previously by Wallis and Wallis in the special medal collection catalogue in June 1988 along with another lot comprising Quill’s son’s India General Service 1854 medal for Pegu; the collection originally formed in the 1940s.

A rare and most desirable officer’s shoulder belt plate of the 2nd or Royal North British Dragoons (Scots Greys), of slightly convex, rectangular form with engraved stylised border, applied centre device of a rose and thistle spray within a strap inscribed ‘Nemo Me Impune Lacessit’, surmounted by a crown, and with St Andrew and cross in oval below, with red and blue cloth centre backing, sold for £4700.

Much of a soldier’s time is spent waiting rather than fighting and time becomes a burden to be filled with mundane tasks. Often the most ordinary of objects are found on the field following a battle. This shows one such object found shortly after Waterloo at the famous farm of Hougoumont. A playing card, the Knave of Hearts, in a small standing leather frame lettered in gilt ‘Waterloo’, the card inscribed on the back in a contemporary hand ‘Brought from the Farm Goumont (Hougoumont) Aug 10/1815’. Measuring just 4½ inches x 3½ inches it made £1300.

It is likely that there will be a number of items of this type coming up for sale this year and provenance is all-important. Fortunately, a contemporary ink note accompanied this lot. A lock of Napoleon’s hair, in a folded slip of paper with a note, ‘Bonaparte’s hair given to me by Captain Fuller 53rd Regt May 8th 1816’ and letter from the National Army Museum with details of Captain Fuller, who arrived in St. Helena with the 2nd Battalion 53rd Regiment, 8th May 1816, and left 29th July 1817 with the men who were being discharged. It went for £450.

Now we move on to a very rare Other Rank’s heavy canvas valise or backpack of The 97th (Invernesshire Highlanders) Regiment, the outside painted light brown with roundel on the front cover with ‘F/97 Inverness Shire Regt’, soldier’s name ‘1: McDonald’ on the lower inner edge, leather fastening and shoulder straps; the regiment was raised in 1795 and disbanded the following year. It sold for £1400.

A brass and copper bugle from Waterloo, green and red cords and tassels, the maker’s name ‘Wigley 204 Strand’ on the mouth. It had two labels attached which read; ‘British Bugle from Waterloo made by Wigley 204 Strand. Purchased in Newmarket circa 1950. See contemporary label and states: ‘Bugle brought from the field of the Battle of Waterloo, Reverse M. Thrope Ch….Came from Chippenham Park. Near Newmarket’. It made £2100.

Military helmets and headgear make wonderful displays and are therefore highly sought after by collectors. There were a number of rare items in the sale and we show some of them here.

A General officer’s cocked hat, possibly of the Household Cavalry. Of black beaver, gilt openwork and stud device with eight-pointed star in the centre bearing a roundel with silver plated ‘Peninsula’ and ‘Waterloo’ scrolls, the device 7½ inches x 3 inches, leather and oil cloth lining. It was in good condition and sold for £2300.

An impressive officer’s helmet of the 2nd Belgian Regiment of Carabiniers, circa 1815-20. The gilt brass skull and peaks with applied gilt mounts, lion head helmet plate and ornamental comb with panelled sides and grenade in front, black hair plume with short tail. Good Condition, retaining much original gilt. It sold for £3250.

A Belgian cuirassier’s helmet circa 1815 of the 5th Regiment, steel skull. With broad beaver fur headband and leather peak, Medusa Head finial over breastplate bearing ‘5’ badge to the front, black hair shaving brush plume and long hair falling back horsehair plume. Good condition, with a sword stroke dent to skull. It went for £5300.

An officer’s 1800 (stovepipe) shako of the East Norfolk Militia. Of black patent leather with integral peak, brass badge of Norwich Castle and lion in crowned title strap, black cockade with its 7½ inch red and white wool tuft plume. Good Condition with some wear to the patent leather. The hammer fell at £2400.

Now we move on to fine-edged weapons and start with an officer’s mameluke hilted sword, with curved shallow fullered 30 inch blade, marked Solingen on the backstrap and ivory grips with brass rosette studs. It came with its steel two-ring scabbard, engraved at the top ‘Worn by Lt. Col Sir Henry Hollis Bradford KCB, during the Peninsula War and at the Battle of Waterloo, where he was mortally wounded’. It sold for £5500. Note: Lt Colonel Sir Henry Hollis Bradford, 1st Foot Guards, died at La Vacherie in France on December 7th 1816 from wounds received at Waterloo, his name appears on the Regimental plaque at Hougoumont.

A light cavalry officer’s sword of The 10th Hussars, presented by The Prince of Wales in 1808, with broad curved fullered 32½ inch blade, double edged at point. It was etched for three quarters of its length, in imitation damascene panels, with large barbed serpent scrolls around central panels, the panel on one side bearing ‘H.R.H. George P.W. to R.E.W. 10 Hussars 1808’, gilt stirrup hilt, the langets shaped around silver plated Prince of Wales’s feathers. The hilt retained much original gilt. It belonged to Rowland Edward Williams, Cornet 1805, Lieutenant 1806, and Captain 1809. It made £3100.

A 1796 pattern heavy cavalry trooper’s sword, with straight shallow fullered 33½ inch blade, in its steel two-ring scabbard. It was in unusually crisp condition and the blade retained some original finish. Because of this it made almost twice the price of an average example, £2000.

An impressive and important presentation mameluke sword from Lord Paget, the curved flat 31 inch blade, double edged at point, frosted within polished edges for the entire length on both sides. On one side a presentation panel ‘From Major General Lord Paget to his Aide de Camp, Captn Diggens, 11th Lt Dragoons, Feby 1802’. The copper gilt crossguard with langets and bud terminals, with toothed chevron border and a six-pointed star in a circle on one side, the ivory grips inset with gilt rosettes, in its leather covered scabbard. It retained a little original gilt and made £4000.

A rare 1788 pattern heavy cavalry officer’s sword, the curved, fullered 35 inch blade marked I.R Solingen on the backstrap and etched with mounted Hussar, Turkish bonnet, trophies and flourishes, with ‘77’ at the forte (repeated on scabbard). The steel hilt with two folding sidebars, which are clipped inside the knucklebow and open out to form a semi basket hilt. In its steel two-ring scabbard with inset leather panels, engraved ‘Knubley & Co, Charing Cross, London’ (the style of the firm in 1786-97). In good condition, with a dark patina to hilt and scabbard, it sold for £1900.

A presentation light company officer’s sword of The 61st (South Gloucestershire) Regiment from Lieut Col Herford, curved 27½ inch blade, etched with crowned GR cypher and trophies within floral and foliate panels, heavy gilt stirrup hilt with cut away corners. In its ornamental brass scabbard, pierced with sunburst circles and key pattern panels, backed with red leather, presentation inscription on locket reading ‘From Lieut Col Herford to Lieut William Bace of the 1 Batt 61 Foot. By gratitude for his Valour and Support in the Action at Toulouse, June 8th 1814’. The hilt retaining approximately 40% gilt and the hammer fell at £3700.

Now we move on to firearms and start with a scarce 10-bore New Land Pattern flintlock musket, the 42 inch barrel with ordnance proofs; the plain lock with ring neck cock and raised pan, the plate bearing ordnance inspector’s mark and stamped with crowned ‘GR’ and ‘Tower’, walnut stock with clear crowned broad arrow over ‘1805’ storekeeper’s mark on the butt. The barrel retained much original browned finish beneath some light rust. It made £3300.

A scarce 10 bore 1796 Heavy Dragoon style Nock flintlock carbine with patent screwless lock. The 28-inch barrel with ordnance proofs and patent breech; the lock with ordnance inspector’s mark and ‘H. Nock’ on the plate, the flashguard engraved with crowned ‘GR’; with walnut stock with clear ordnance storekeeper’s mark on the butt. It had good age patina overall and took a very healthy £7000.

An extremely rare low serial number .65 inch Sartoris breech loading flintlock cavalry carbine, circa 1820. The smooth bore barrel measuring 21½-inches to the hinge. When rotated anticlockwise by means of a folding lever the barrel disengages an interrupted thread on the breech allowing the barrel to be slid forward in two brass guides, and the breech can then be hinged upwards for loading. The underside of the breech bearing London proof house view mark and stamped ‘15 A.F.B’ (Anthony Farindon Biven), the number 15 also appearing on the frame beneath the breech. Unmarked stepped lock with safety bolt, slightly raised pan, and roller on frizzen spring. It was in clean condition and sold for £4400.